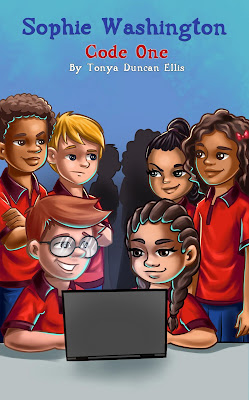 Xavier Academy is having a computer coding competition with a huge cash prize! Sixth grader Sophie Washington and her friend Chloe can’t wait to enter with their other classmates, Nathan and Toby. The only problem is that the boys don’t think the girls are smart enough for their team and have already asked two other kids to work with them. Determined to prove the boys wrong, Sophie and Chloe join forces with classmates Mariama, Valentina, and “brainiac,” Rani Patel, to form their own all-girl team called “Code One.” Computer coding isn’t easy, and the ladies get more than they bargain for when hilarious mishaps stand in their way. It’s girls versus boys in the computer coding competition as Sophie and her friends work day and night to prove that anything boys can do girls can do better!
~~~~~~~~~~~~~
EXCERPT
“Watch out! Here comes a roll!”
I duck my head and clutch my tray close to my body to avoid getting hit by the hard piece of bread, and then wrinkle my nose at the strong smell of bleach, canned vegetables and mystery meat that fills the cafeteria. The smaller boys, who threw the food at me, crack up laughing, scattering to various tables around the room.
“Sheesh, are those fifth graders immature,” I frown and shake a crumb out of my thick ebony braids. My friends and I were definitely not so silly last year.
Lunchtime at Xavier Academy can be a zoo. The teachers sit at tables in the back of the lunchroom, and the kids sit in front near the food line. Since it’s a private school, the price of our lunches is included in the money our parents pay. We can go through the line as many times as we want during the thirty minute lunch period, and that sometimes leads to food fights when the teachers aren’t looking.
“Let’s sit at that table over there.” My best friend Chloe points to some seats near our other classmates, Nathan Jones, Toby Johnson and Carlton Gibson. Chloe and I usually sit with the other members of our cheerleading squad, Valentina Martinez and Mariama Asante, but I don’t see them.
“Hey, guys, what’s up?” Chloe asks, then flashes her too-white-to-be-true smile and shakes her glossy, black curls. She’s one of the prettiest girls in our sixth grade class, and also one of the most popular.
Chloe gets all the attention from the boys, especially Toby, who has followed her around like my dog Bertram chasing a tennis ball, since he transferred to our school last year. Chloe won’t admit it, but she kind of likes him, too. Kids in our class call them ToChlo behind their backs. 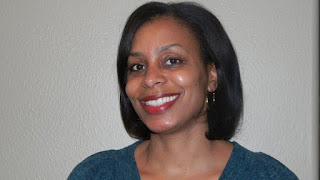 Tonya Duncan Ellis is the author of the Amazon bestselling, Readers' Favorite "Five Star" rated, Sophie Washington children's books series, geared toward readers ages 8 to 12, and is a member of the Society of Children's Book Writers and Illustrators (SCBWI). She has received awards for literary excellence, worked as a journalist and freelance magazine writer, and is a graduate of Centre College of Kentucky and Washington University in St. Louis.
The Sophie Washington book series recounts the adventures of a precocious African American preteen from Houston, TX and her diverse group of friends. Each funny and heartwarming story teaches lessons about friendship, responsibility, truthfulness and perseverance. Books in the series include Queen of the Bee, The Snitch, Things You Didn't Know About Sophie, The Gamer, Hurricane, Mission: Costa Rica, and  Secret Santa.  Tonya loves to travel and has visited 49 American states and three continents, but some of her best journeys have been between the pages of a novel. As a girl she could always be found with a book in her hand, and reading is still one of her favorite hobbies. When she's not reading or writing, the author likes to ride her bike, swim, and spend time with her husband and three children. She lives in Missouri City, TX.
Facebook: https://www.facebook.com/tonyaellisbooks/
Twitter: https://twitter.com/TonyaDEllis
Instagram: https://www.instagram.com/tonyaellisbooks/
www.tonyaduncanellis.com
Buy Links:
Amazon:
https://www.amazon.com/Sophie-Washington-Tonya-Duncan-Ellis/dp/1733776303/
Barnes and Noble:
https://www.barnesandnoble.com/w/books/1130732593
The book will be on sale for only $0.99.
~~~~~~~~~~~~~
GIVEAWAY
Tonya Duncan Ellis will be awarding a $25 Amazon or Barnes and Noble GC to a randomly drawn winner via rafflecopter during the tour.
a Rafflecopter giveaway


ON EACH STOP TO EARN MORE ENTRIES TO WIN!
April 29: Andi's Middle Grade and Chapter Books
April 29: Our Town Book Reviews
May 6: Sharing Links and Wisdom
May 6: Mama Panda Bear
May 13: The Reading Addict
May 13: Locks, Hooks and Books
May 20: Kit 'N Kabookle
May 20: Fabulous and Brunette

I give Code One five plus stars. I hope there will more books releasing in the Sophie Washington series for many years in the future.

I highly recommend this book for all middle grade readers.