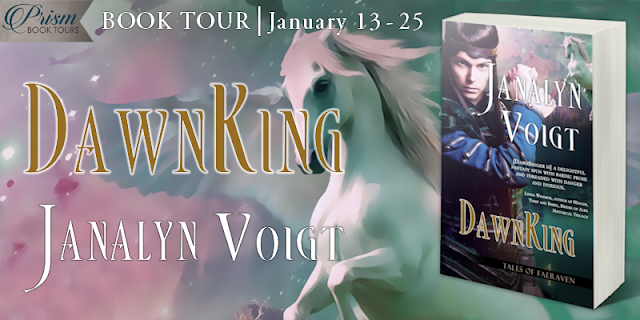 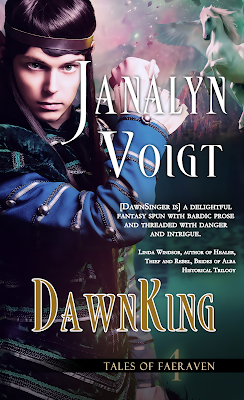 A prince marked for death, a princess without a kingdom, and a world at war.

Unlikely travelers band together to accomplish the impossible—bring peace to their kingdom. But traitorous forces are at work, and a treacherous hand is destroying everything they accomplish.
Honor and soul-searching bring the travelers to hidden truth, and when a sacrifice is made, the broken-hearted band of misfits must cleanse the evil from their midst to free their world...or lose everything. 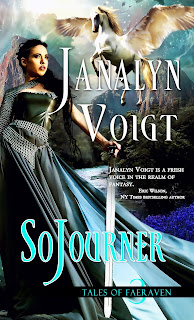 [Mara, daughter of the high king of Faeraven, is forced to travel in the company of Rand, a protector she isn’t certain she should trust, and certainly not with her heart. At a crossroads, the two argue over which way to turn.]
On impulse, she pushed through the weilo’s trailing branches into the shade beneath the tree. In its privacy, she dried her cheeks on her sleeve before pushing aside the screening leaves to look out at him. “I prefer to wait here.”
Rand opened his mouth but shut it again. "Suit yourself." He stomped off toward the river, the wingabeast following him with graceful steps.
Mara let the leaves fall back into place. The green shade beneath the tree embraced her. A flaemling landed on a branch above her and flicked its red feathers. The bird opened its throat and voiced an aching lament that resounded deep within her. Her father might be dead or dying. If he passed into the Land Beyond, her life would change forever. How could she disappoint the hope he’d placed in her? She would have to ascend to the high throne of Faeraven.
Mara peered out from the screen of leaves. The lonely road ran straight then disappeared around a bend. That it might curve back around the right direction seemed possible. Rand should be more reasonable. If he was wrong about the fork he wanted to follow, they would lose time retracing their footsteps. They really should make sure the main road didn’t bend northward before taking that derelict track. She left her hiding place and stepped onto the road. Her feet made little sound as she hurried along. Fading sunlight slanted through the trees that lined the road, casting long shadows. She went around the bend and stopped, undecided. The road curved westward just ahead. If she didn’t start back, Rand might return and find her gone. She didn’t want to worry him, but how could she give up without going just a little farther? And yet…
Something felt wrong.
A grove of strongwoods lifted twisted branches against the deepening sky. The trees bordered a meadow thick with undergrowth. Anything could be hiding in there.
She should go back. Curiosity lured her onward. The bend wasn't far. She started forward, darting glances into the shadows. The sensation of someone watching crawled over her skin. Mara’s steps slowed. She should persuade Rand to come back with her.
Movement flickered at the edge of her vision.

Janalyn Voigt is a writer and professional speaker with a photography habit and a passion for travel. Her unique blend of adventure, romance, suspense, and fantasy creates worlds of beauty and danger for readers. Tales of Faeraven, her epic fantasy series beginning with DawnSinger, carries readers into a land only imagined in dreams. She is represented by Sarah Joy Freese of Wordserve Literary. 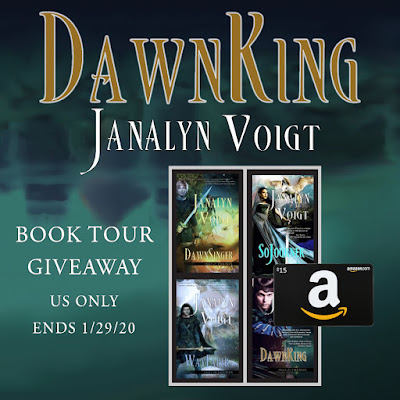 One winner will receive a Tales of Faeraven bookmark and a $15 Amazon Gift Card (US only)
Ends January 29, 2020