Review Tour and Giveaway: The Matchmaker Club by Kayley Wood

The Matchmaker Club
by Kayley Wood 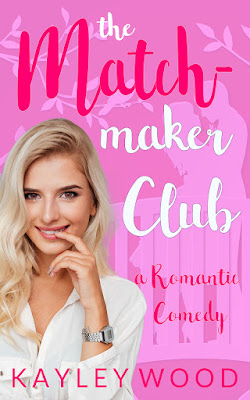 ~~~~~~~~~~~~~
GENRE: Romantic Comedy/Chick lit
~~~~~~~~~~~~~
BLURB:
How do you loosen up a rigid, brooding billionaire with a broken heart? Nothing a game of Spin the Bottle, a skinny dipping dare, and poison ivy couldn't fix!
This feel-good rom-com is quickly becoming another fan favorite in the hilarious and sweet Club Series.
"I couldn’t put the book down. The story was great." - Jillian – 5 Stars
"OH THE FEELS! A great read!" - littleboodamommy - 5 Stars
"If you like heartwarming romantic comedies then you’ll definitely enjoy this book!" - Amanda Beaumont - 5 Stars
"There are several moments that will leave you giggling, and even more that will leave you sighing in content. You cannot go wrong when you click a book in this series." -Des - 5 Stars
Hilarious. Sweet. Sassy.
It is an indisputable fact that Reed women are not marriage material.
The great-granddaughter of a famous burlesque dancer, the granddaughter of an ex-hippie, and the daughter of an eccentric artist, Taylor quickly learns the heartbreaking lesson of her family curse after her first love ends in rejection.
Apparently, Reed women are not girlfriend material either.
Nestled in a small town in Maine, Cedar Gardens is the worn-down estate which the Reed women call home. But there’s one catch: It doesn’t belong to them. Almost seventy years ago, Mortimer J. Freeman bought the place for his long-lost love, Marlena Reed. Now, his great-grandson—and heir to billions—Lucas Freeman is in town with an agenda: to quietly reclaim the estate and Mortimer’s old love letters to Marlena while avoiding a family scandal. But Taylor’s grandmother has another plan: to play matchmaker with Taylor and Lucas before all three Reed women are kicked out of the only home they have ever known.
The problem? Taylor can’t stand the brooding billionaire, who doesn’t understand the gravity of a triple dog dare or the fun of blowing bubbles in your milk. Responsibility, reliability, and routine are Lucas’s mantra. That is, until the fiery Taylor schemes up a hilarious to-do list to break him out of his habitual shell and, in the process, turns his world upside down.
But falling in love wasn’t part of any of their plans.
Does Cedar Gardens have enough magic to bring Taylor and Lucas together, or will the Reed family curse win out in the end?
THE MATCHMAKER CLUB is the heartwarming, yet hilarious third installment in the Club Series. A New Adult Romantic Comedy full of lol moments, lovable characters, strong female bonds, and gives all the feels!
~~~~~~~~~~~~~
EXCERPT
It is an indisputable fact that Reed women are not marriage material.
My great-grandmother, Marlena Reed, loved once, but he left our small town to build an empire and married a woman more “suitable” for someone of his stature. Heartbroken, Marlena took off to fulfill her dream of becoming a stage actress at the age of nineteen but instead became a famous burlesque dancer in the 1930s. She was arrested eight times for indecent exposure, even though she never showed any nudity. With large feather fans—inspired by the great Sally Rand—Marlena only gave the illusion of nudity.
My great-grandmother never wanted children, but things happen, and at the age of thirty-one, she gave birth to Hattie, my grandmother, who then got pregnant at Woodstock at the age of twenty-two with my mother, Sara. A year later, she got pregnant in San Francisco with my aunt, Elaine.
All the fathers of my family’s children are unknown.
What I know of my own father is that he was an artist in the south of France who went by the name of Jean-Michel. My mother had met him at an artist retreat in Tuscany, where they’d engaged in a lovers’ tryst that had lasted one week. She’d never asked for his last name or an address—no way to contact him.
And that’s how I became a Reed, like my mother and her mother before her.
Being from a small town, you can only imagine the rumors surrounding us. Some are polite enough, some think we’ve killed our male heirs, and some believe we’re actual witches.
As for love? I learned early on, during my high school years, that boys wanted me for one of two reasons: to brag that they had survived death or to piss off their parents.
Apparently, Reed women aren’t girlfriend material either.
This is my one curse.
~~~~~~~~~~~~~
AUTHOR Bio and Links:
Kayley has three simple rules in life:
1. Surround yourself with some incredible, kick-ass women you call friends.
2. Don't worry about failure or mistakes. It's how you respond to them that makes all the difference.
3. An appletini is never complete without two cherries.
Links:
Amazon purchase: https://www.amazon.com/dp/B07SZ3KSPD
Website: www.kayleywood.com
FB: www.facebook.com/authorkayleywood
GR: https://www.goodreads.com/author/show/18941724.Kayley_Wood
BB: https://www.bookbub.com/profile/kayley-wood
~~~~~~~~~~~~~
GIVEAWAY
Kayley Wood will be awarding a $25 Amazon/BN GC to a randomly drawn winner via rafflecopter during the tour.
a Rafflecopter giveaway

I love love love The Matchmaker Club by Kayley Wood. Even though it is the third installment from The Club series, I believe it can be read as a stand alone. I have not read the previous books and did not feel as though lost. However, I would love to read them in the near future to find out what happened. This story was so much fun and it had me laughing out loud throughout. It was such a delight to read.


I am giving The Matchmaker Club a very well deserved five plus stars. I highly recommend it.