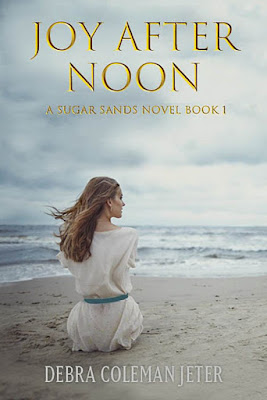 
Joy marries a widowed bank executive caught in an ethical dilemma and misreads his obvious frustration while struggling to integrate into her new family. This novel explores the challenges of second marriages and dealing with step-children during the crucial years of puberty and teenage angst. A college professor coming up shortly for the huge tenure decision, Joy finds herself falling apart as her career and her home issues deteriorate and collide. 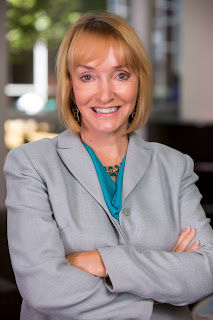 Debra Coleman Jeter has published both fiction and nonfiction in popular magazines, including Working Woman, New Woman, Self, Home Life, Savvy, Christian Woman, and American Baby. Her first novel, The Ticket, was a finalist for a Selah Award, as well as for Jerry Jenkins’ Operation First Novel. Her story, “Recovery,” was awarded first prize in a short story competition sponsored by Christian Woman; and her nonfiction book “Pshaw, It’s Me Grandson”: Tales of a Young Actor was a finalist in the USA Book News Awards. She is a co-writer of the screenplay for Jess + Moss, a feature film which premiered at the Sundance Film Festival, screened at nearly forty film festivals around the world, and captured several domestic and international awards. Joy After Noon is the first novel in her Sugar Sands series. She has taught at Murray State University, Austin Peay State University, and Vanderbilt University, where she is currently a Professor Emerita. She lives in Clarksville, Tennessee, with her husband.

Joy After Noon
With most of my novels, several forces come together to compel me to tell the story. This is definitely true of Joy After Noon. I thought I’d share a few of those.
Carl Jung says: “The afternoon of life is just as full of meaning as the morning; only, its meaning and purpose are different.”Jung goes on to describe life’s afternoon as the time when we begin to shift away from the ego being the dominant force in our life and move toward a journey that has real meaning.
I also like the following quote: In the afternoon of your life, you don’t do life. You do what resonates with the callings of your soul. When does the afternoon of life begin? I don’t believe the afternoon of life begins at a particular age, or even stage of life. In JOY AFTER NOON, Ray has been pursuing career success and material acquisitions, and experiences a significant change of direction. Some fairly disastrous events in his workplace precipitate the change—events that threaten not only his financial stability but the core of who he is.
When I was a kid, I watched a movie called Joy in the Morning, starring Richard Chamberlain and Yvette Mimieux.  This movie was about a young married couple, and the memory of it stayed with me for years. I remember thinking that whereas a typical romance ended when the couple got together or married, the really interesting story starts there. When I wrote Joy After Noon, I decided to focus on a couple that marry a bit later in life. He’s a widower with two teenage daughters. She’s an insecure college professor who has never been seriously romanced.
Initially, the idea for Sugar Sands Book 1 and the title of the novel, Joy After Noon, was that Joy’s life has been lonely (and joy has been elusive) since her parents died when she was sixteen, and she has about given up on finding love when she meets Ray. She comes into his ready-made family and, for a time, this seems like a mistake. However, in the afternoon of her life, she finds love and joy.
What inspired my characters:
There’s always a bit of myself in each of my characters from the least likable to the most. Here’s how I relate to some of the characters in Joy After Noon.

Joy Hancock
Joy is a college professor who has never been in love … until she meets the gorgeous widower Ray Jenkins. In the novel Joy struggles to adapt to her new family at the same time that she’s coming up for tenure as a college professor. I’ve been through the tenure process (with a husband and two kids at home), and I’ve seen a number of others struggle to balance career and family during this stressful process.

Ray Jenkins
Ray, seemingly successful banker, finds himself facing ethical dilemmas as his associates negotiate a dubious merger and then try to hide the undesirable financial consequences. I’ve taught bankers, and I have coauthored a textbook on mergers and acquisitions. I’ve also seen former students caught in ethical crises at work.
Marianne Jenkins
Marianne has aspired all her life to please her demanding perfectionist mother, even after that mother’s death. She cannot live up to her own standards of perfectionism, either as a ballerina or as a cheerleader longing for popularity. I have not studied dance or cheerleading, but I remember being a perfectionist as a child taking piano lessons. I wanted to play a piece with no errors, and I almost never succeeded.

Jenny Jenkins
Jenny, the younger daughter, knows she could never come near to the example set by Marianne, so why try? Jenny plays clarinet in band. As she practices for tryouts, she has a loose pad, causing her horn to squeak rather than play properly. I was a clarinet player, and had this exact experience myself. Jenny becomes friends with a wild girl named Claudia, who leads her to trouble. I had a similar friend as a teenager, and she was even named Claudia. Claudia is a tragic figure in the novel, but not an unsympathetic one.
Although Joy After Noon is part of a series, each book in the series stands alone.
Song of Sugar Sands
Sugar Sands Book 2, Song of Sugar Sands, has recently been announced as a Finalist in the Christian Fiction category in the 2020 Next Generation Indie Book Awards. 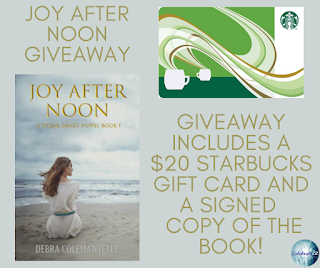 To celebrate her tour, Debra is giving away the grand prize package of a $20 Starbucks gift card and a signed copy of the book!!
Be sure to comment on the blog stops for nine extra entries into the giveaway! Click the link below to enter.
https://promosimple.com/ps/ff18/joy-after-noon-celebration-tour-giveaway
My Review
Joy After Noon is a great start of Debra Coleman Jeter’s newest series, Sugar Sands. I really enjoyed this story. I thought the author did a fantastic job on writing about true to life issues and struggles that many readers will be able to relate to. I loved Joy from the start and had to keep reading to see how everything would play out with her and her family.
I am going to give Joy After Noon a very well deserved five stars. I look forward to getting my hands on the next installment from the Sugar Sands series. I can not wait to see what the author has in store for her readers. I highly recommend this one for readers who enjoy clean and inspiring stories that are full of faith.
I received Joy After Noon from the publisher. This review is one hundred percent my own honest opinion.
Posted by Amybooksy at 1:00 AM