Blog Tour and Giveaway: Seven Sevens in the Gospel of John by Sinikka Smothers 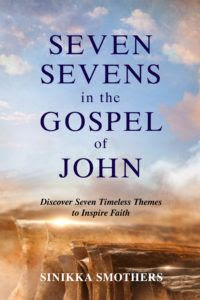 The number seven is significant in science and history as well as in the Bible. When a science educator applies the lens of seven onto the gospel of John, intriguing patterns emerge. Author Sinikka Smothers says, “God has a purposeful design for every area of His creation—including the use of numbers. God loves numbers, especially the number seven. He used mathematical algorithms to construct the matrix we call our universe. Mathematics is God’s language of creation.”

Discover refreshing insights into the life of Christ through this study of seven themes embedded in John’s gospel narrative. The author presents John’s message in seven parts, each one divided into seven sections. Revisit the familiar seven “I AM” statements of Jesus and other sevens that are not widely written about:
This unique commentary includes rich historical details and paints a vivid portrait of Jesus the Son of God as Master, Savior, and Friend. Relevant stories and personal applications bring the familiar accounts of the book of John to contemporary contexts.

Sinikka Smothers emigrated from Finland to Alabama to study after receiving a college scholarship. While her original plan was to become a missionary, meeting her future husband, Jim, in college changed the direction of her life. She worked twenty-five years as a science teacher with individuals who are visually impaired, and earned her doctorate in education from the University of Alabama. Recently retired, she enjoys teaching Bible classes and spending time with her husband of forty years, two children, and three grandchildren.

A mob of men, women, and children were climbing up the hillside by the Sea of Galilee. “There he is!” someone shouted from above. Those withing hearing distance turned quickly and began to hasten in the direction of the voice. The rest of the large crowd followed their lead, trapped in a current of motion. It was difficult for them to see ahead since the number of people had grown to more than five thousand. Mothers and fathers picked up their young children to protect them from the travelers pressing against them while trying to move ahead to the front of the throng…
Seven Sevens in the Gospel of John began with hand written notes overflowing the pages of my devotional journal. The journal led to several hundred typewritten pages of commentary on John’s narrative of the life of Jesus. After teaching two bible studies based on my emerging outline of seven sevens, I ran into Athena Holtz with Redemption Press. Athena connected me with an editor who condensed my tub-full of writing to a sleek 195 pages. The ten-year-long writing project reached its finish line in January 2020 when I received my “author’s copy”. I will always remember the joy I felt at the first sight of the shiny book cover featuring a summer sky above the gold colored pages of an old parchment. Indeed, if John’s gospel is the treasure map, the timeless treasure it points to is Jesus, our Savior and Lord.
Seven Sevens in the Gospel of John does not add anything to John’s masterful presentation of Jesus as the Son of God and the Son of Man who invites everyone to live in a personal relationship with Him. It merely offers refreshing perspectives and a novel framework for the reading and rereading of this well-loved gospel. Each of the seven themes in my book contains seven subtopics, totaling 49 chapters. The chapters include special anecdotes, personal stories, and information pieces that connect the themes to contemporary contexts. It is my hope that the reader will find the book useful as a Bible study companion, book study, teaching outline or a devotional reading.
After my book project was completed, something new and surprising began to rise up in my spirit: I became inspired to experiment in visual arts. I wanted my Facebook posts for my book to stand out and speak to diverse audiences; as a result, I constructed collages, used mystery photos from the Holy Land, searched through our family’s Google photos, and began to paint images on old wooden boards I found in our shed.  This explosion of artistic expression has led me to rent a booth at a local antiques and crafts mall. If you visit Huntsville, Alabama, please stop by at the Top Key Market to see my booth, at the center of which stands a worn pulpit featuring Seven Sevens in the Gospel of John.
I inherited my love for words from my mother who always spoke the right words for every situation. She often quoted wonderfully quaint Finnish folk sayings that carried centuries of wisdom. I became an avid reader and writer at the age of 6. Academic studies occupied most of my professional life as a teacher, but after retiring four years ago, I have plunged into reading and writing to make up for the lost time. My husband and I have been married for 41 years. Our two children and four grandchildren live nearby and add a lot of fun to our weekly calendar. I look forward to writing a biographical book in the near future. The theme, of course, will include the number seven.