Blog Tour and Giveaway: Six Years and a Quarter Way Through by Cassandre Brissot 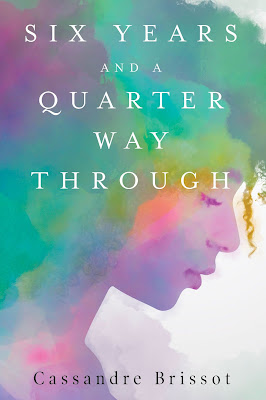 Six Years and a Quarter Way Through is a story about a young woman who’s lost her way. Like many of us, Leah believed that the vision supersedes the process until, at age twenty-six, she stops believing in the vision and the one who gave it to her. Leah has lost her faith, her job, her confidence, and maybe her mind. Utterly defeated and without hope that her dreams to become a star would come true, she meets Trenton Shaw, a rich, powerful, handsome, hot-shot producer who has spent the last six years of his life trying to find her. Leah is weary of Trenton initially, particularly since he is adamant about enlisting her for a new reality show that he is putting together called “Star Quality.” However, after reasoning that she has nothing left to lose, she consents. If she wins the show, she will receive a cash prize, an agent, and most importantly a part in a brand-new feature film; even if she loses, people would still know her name.

Trent and Leah quickly fall for each other, forming an intense and sometimes volatile relationship, which only gets more complicated after she moves into the house she’ll be sharing with her costars and meets Brice. Frightened awake from a nightmare, Leah stumbles into the living room, where she finds Brice looking as haunted as she feels; he confides in her about his dead fiancée, and she in him about her nightmares and anxiety attacks. Her nightmares recur, worsening with each night as the competition intensifies and her relationship with Trent deepens. Gradually it becomes apparent that Leah’s way of getting everything she’s ever wanted may have taken her on a road she should not have traveled.

At its core, this is a story about the journey we all must take: What do we believe? How strongly do we believe it? Will that belief be steadfast in the face of temptation? Although everyone’s story is different, you only either chose to do it God’s way or your own. 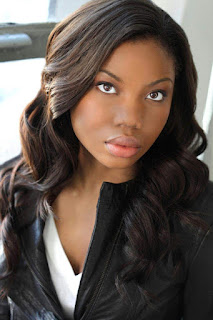 Cassandre Brissot is the author of debut novel, Six Years And A Quarter Way Through. She completed her bachelor of fine arts in Television and Radio production at the City University of New York Brooklyn College. She then went on to work as a TV production assistant until becoming a flight attendant in 2014, which is the same year she was crowned Miss Black New York USA. Nowadays, she can still be found on set but in front of the cameras, though mostly as an extra, thus far. When she’s not on a set, she’s writing for her blog. She also enjoys dance parties with her young nieces and karaoke, very much.

The best part of being young is the possibilities. In your minds eye you’re the next president, or celebrated surgeon, maybe a coveted fashion designer, you might even be Superman. As a child I dreamed fanciful dreams of stardom, celebrity, vast fortune, and a handsome prince to boot. I couldn’t wait to grow up so I could start living the fabulous life I knew would be mine. In spite of the hardships of my early years, I never doubted that my life would go according to plan, when it didn’t, it just about killed me.
I received my college diploma with a dangerous amount of pride. I was certain that after one of the best years of my life, which included interning at a prominent television network, success on the pageant circuit, and getting cast in and shooting a great pilot, that the world was my oyster. I had the talent, ambition, drive, and connections. Not to mention, I knew God. Why wouldn’t things work out for me?
Nearly two years passed before I was able to gain employment-as a sales associate, in a small boutique. No one would hire me let alone cast me in a project. The pilot I’d banked all my hopes on was never picked up. Each day that went by brought me to new lows. The successes of my friends and former classmates made the pain all the more acute. I was depressed, making terrible decisions in every area of my life, and loosing it. Thinking about my shattered hopes gave me an anxious feeling in the pit of my gut. Often that feeling turned into a full-blown anxiety attack. I was fledgling and inconsolable until The Holy Spirit spoke to me. What’s more important, He asked, the fame and the money or a relationship with Him?
It’s ironic, I called myself a Christian but I never consulted Christ about my life. I prayed for better but never did I ask God what His will was for me. I wanted what I wanted. I didn’t stop there. I wanted God to bless my endeavors regardless of whether it was His will for me or not because it was mine. Everything I’d done to that point answered the question loudly and clearly. I’d lived in yearning for things not Christ. It was heartbreaking coming to terms with that, however it was also the wake up call I needed. I finally understood I couldn’t serve two masters at the same time. I decided to seek first the kingdom of God and His righteousness and the rest of the things would come in His divine time.
The Holy Spirit taught me a lot of things during that season of my life: who you are-your character-is more important to The Lord than where you’re trying to go. Sometimes God will allow you to falter for the sake of truly finding Him, and perhaps most prominently, that nothing matters more than a true relationship with Christ. Six Years And A Quarter Way Through, was born of those lessons and the desire to honor Christ as a witness to His redemptive power and love.
Leah Albanese is a young woman who chooses the things-including the boy who is offering them-over God, but she soon learns that even when you give up on God He doesn’t give up on you. 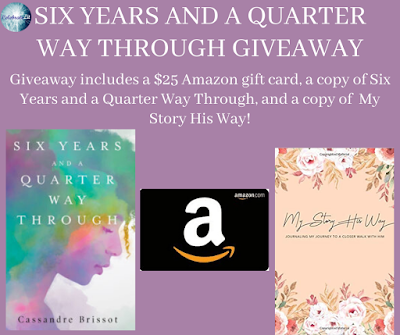 To celebrate her tour, Cassandre is giving away the grand prize package of a copy of Six Years And A Quarter Way Through, 1 journal (My Story His Way: Journaling your journey to a closer walk with Him), and a $25 Amazon gift card!!
Be sure to comment on the blog stops for nine extra entries into the giveaway! Click the link below to enter.
https://promosimple.com/ps/fe94/six-years-and-a-quarter-way-through-celebration-tour-giveaway

I thought Six Years and A Quarter Way Through was a fabulous book. I had it read one day. I enjoyed every single page. The characters were so relatable, I felt like I actually knew them. I adored Leah from the start. I could understand her struggles and how she had lost her way. She has a lot to learn and that her story teaches so many important lessons. What a great reminder that we all could learn from. Such a beautiful story of love, faith and inspiration.

I highly Six Years and A Quarter Way Through and am giving it a very well deserved five plus stars. Readers who enjoy clean fiction will love this one. I know I did. It is definitely not one to be missed. I will be looking forward to more talents of Miss Cassandre Brissot in the near future.