VBT and Giveaway: The Last Collection by Jeanne Mackin

The Last Collection
by Jeanne Mackin 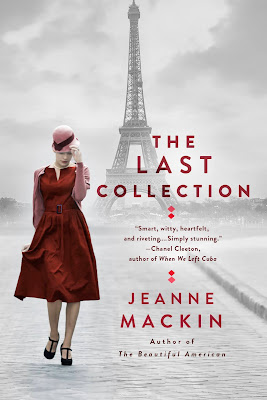 An American woman becomes entangled in the intense rivalry between iconic fashion designers Coco Chanel and Elsa Schiaparelli in this captivating novel from the acclaimed author of The Beautiful American.

Paris, 1938. Coco Chanel and Elsa Schiaparelli are fighting for recognition as the most successful and influential fashion designer in France, and their rivalry is already legendary. They oppose each other at every turn, in both their politics and their designs: Chanel’s are classic, elegant, and practical; Schiaparelli’s bold, experimental, and surreal.

When Lily Sutter, a recently widowed young American teacher, visits her brother, Charlie, in Paris, he insists on buying her a couture dress—a Chanel. Lily, however, prefers a Schiaparelli. Charlie’s beautiful and socially prominent girlfriend soon begins wearing Schiaparelli’s designs as well, and much of Paris follows in her footsteps.

Schiaparelli offers budding artist Lily a job at her store, and Lily finds herself increasingly involved with Schiaparelli and Chanel’s personal war. Their fierce competition reaches new and dangerous heights as the Nazis and the looming threat of World War II bear down on Paris.

"Sophisticated couture wars and looming world wars take center stage in Mackin’s latest, with a plot that buzzes with love triangles and political intrigue. A gorgeous meditation on art, fashion, and heartbreak. Stunning."

“Exquisitely melding world politics and high fashion, THE LAST COLLECTION is a smart, witty, heartfelt, and riveting look at the infamous rivalry between Coco Chanel and Elsa Schiaparelli set against a gripping period in history. Mackin’s powerful novel brings these characters to life and transports the reader, juxtaposing both the gaiety and tension of Paris on the brink of war. As elegant and captivating as the designs depicted in the novel, THE LAST COLLECTION is the perfect read for both historical fiction lovers and fashion aficionados. Simply stunning.”

“A wonderful story of two intensely creative women, their vibrant joie de vivre, and backbiting competition played out against the increasingly ominous threat of the Nazi invasion of Paris. Seamless research makes every character leap to life and kept me totally engaged from beginning to end.

“A vibrant portrait of two designers cut from very different cloth, Jeanne Mackin’s THE LAST COLLECTION pits bold Coco Chanel and colorful Elsa Schiaparelli against each other in a fiery feud even as the ominous clouds of World War II darken the horizon. A captivating read!”

"As Hitler and the Nazis gather strength and the world braces for war, Elsa Schiaparelli and Coco Chanel, whose politics differ as much as their couture, wage a war of their own. Lily Sutter, the woman who finds herself in the middle of their feud, has a battle of her own as she struggles to make a new start amidst extreme grief and loss. From New York to Paris, Jeanne Mackin takes the reader on an enthralling journey, complete with such vivid descriptions of the clothing, you can practically see them on the page. Beautifully rendered and meticulously researched, THE LAST COLLECTION is a must read."

“And now,” Charlie said, taking back his cap and tilting it over his forehead. “Schiaparelli it is. Your choice. But I have to make a quick phone call. We were supposed to meet someone at the Chanel salon.” He went into the café and was out again a minute later, smiling sheepishly.

We prowled down lanes and avenues, dodging around fruit and vegetable carts, policemen on horses, jaywalking pedestrians, and other automobiles.  We crossed over the Seine. “Pont Royal” Charlie shouted.  “Remember?” A silver Seine, trees in full leaf, pots of geraniums on every stoop, under windows, rows of schoolchildren in uniform following black-and-white nuns, handsome gendarmes, and over it all,  hanging like an invisible presence, the sense that this was the best place to be. June in Paris.

Jeanne Mackin ‘s latest novel, The Last Collection, A Novel of Elsa Schiaparelli and Coco Chanel takes the reader to Paris, just before world war II, and the intense, dangerous rivalry between the two queens of fashion. Her previous novels include A Lady of Good Family, the award winning The Beautiful American, The Sweet By and By, Dreams of Empire, The Queen’s War, and The Frenchwoman.
Her historical fictions explore the lives of strong women who change their worlds…because we know the world always needs a lot of change! She has worked all the traditional ‘writers’ jobs’ from waitressing to hotel maid, anything that would leave her a few hours each morning for writing. Most recently, she taught creative writing at the graduate level.  She has traveled widely, in Europe and the Middle East and can think of no happier moment than sitting in a Paris café, drinking coffee or a Pernod, and simply watching, while scribbling in a notebook.