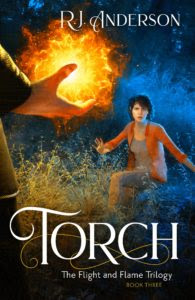 How do you fight fire without fire?

When a freak storm uncovers the entrance to a mysterious underground chamber, Ivy and Martin expect to find treasure. But what they discover is even more valuable: a barrow full of sleeping spriggans, magically preserved for centuries. With the vengeful piskey queen Betony determined to capture Ivy and her followers, the secret hideaway could be key to both their peoples’ survival.

But the piskeys and spriggans are ancient enemies, and when Ivy tries to make peace her own followers threaten to turn against her. Plagued by treachery, betrayal and desertion on every side, Ivy must find a way to unite the magical folk of Cornwall–or doom herself, Martin and everyone she loves to death at Betony’s hand.

Yet without the legendary fire-wielding power that marks a true piskey queen, can Ivy convince her people to believe? 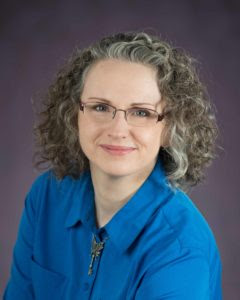 Born in Uganda to missionary parents, R.J. (Rebecca Joan) Anderson is a women’s Bible teacher, a wife and mother of three, and a bestselling fantasy author for older children and teens. Her debut novel Knife has sold more than 120,000 copies worldwide, while her other books have been shortlisted for the Nebula Award, the Christy Award, and the Sunburst Award for Excellence in Canadian Science Fiction. Rebecca lives with her family in Stratford, Ontario, Canada.

What does it take to be a good leader?
Looking at some of the religious, social and political leaders around us, it seems like a confident attitude, dramatic flair, and the ability to make stirring speeches are the keys to success. But is that the kind of leadership people really need, or is it only what we’ve grown used to?
Ivy, the heroine of my book Torch, never wanted to become a leader, or expected anyone to follow her. After being exiled from her underground home by her proud Aunt Betony, she’s been struggling to make sense of her own life, never mind anyone else’s. But when a ragtag band of old friends and former neighbours turn up on Ivy’s doorstep looking for a new home, she has no choice but to help her fellow Cornish piskeys as best she can.
What Ivy soon finds, however, is that her people’s hopes and expectations for her are much bigger than any she had for herself. They want a queen strong enough to defeat Betony and free their people — but how can Ivy stand up to her aunt’s ruthless tactics and magical fire-wielding powers, when she’s just a slight teenager with barely any magic at all?
As I wrote this book, the last in my Flight and Flame trilogy about Ivy of the Delve, I wanted to explore the difference between the popular idea of a great leader, and the humble servant leadership taught and exemplified by Christ. Unlike Betony, who has become so obsessed with her own power and reputation that she’s blind to her people’s suffering, Ivy only wants to help and encourage her fellow piskeys and keep them safe from harm. She’s willing to sacrifice her own comfort, put aside her own feelings, and do whatever it takes to make sure her followers survive. And though she makes some mistakes and faces some painful challenges along the way, she never forgets that her goal isn’t personal fame or glory, but the good of everyone around her.
Ivy’s personal journey also reflects some of my own recent experiences of caregiving, which can seem like an impossible task when the needs of our loved ones grow greater than our own strength and wisdom can bear. She has to learn, as I did, that the only solution is to ask for help and be willing to let others do it their own way, instead of trying to control everything ourselves.
Torch is the last book of the epic adventure that began with Swift and continued in Nomad, taking Ivy from the depths of obscurity to heights she never imagined, and from a life of loneliness to a love sweeter — and stranger — than she ever dreamed she’d find. It’s a story that’s close to my heart, and I hope it will find a place in yours and your family’s as well!
— R.J. Anderson

Because I said so — and other adventures in Parenting, February 28

Through the Fire Blogs, March 1

For the Love of Literature, March 4

For Him and My Family, March 6

Adventures of a Travelers Wife, March 10 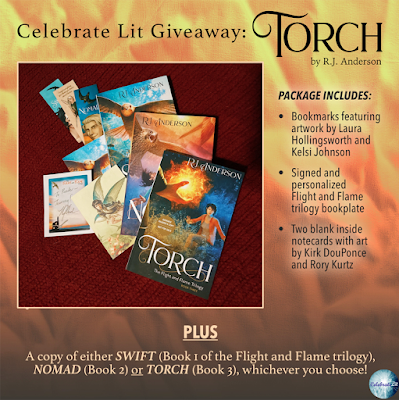 To celebrate her tour, R.J. is giving away the grand prize package of a signed bookplate, bookmarks, notecards, and a copy of either SWIFT, NOMAD or TORCH!! (winner’s choice)

Torch concludes The Flight and Flame Trilogy by RJ Anderson. I have had the pleasure of reading and enjoying the first two books of the series, Swift and Nomad. Even though they are part of a series, I believe they can be read as stand alones. I thought this was a great read and I believe this one is probably my favorite of the three. I enjoyed the action and adventure. It was fun and entertaining to read. I had no problem reading the whole book in one sitting. It was great.

I am giving Torch five stars. I recommend it for readers between the ages of ten and fourteen and for those who enjoy fantasy and science fiction. I look forward to reading more like this from RJ Anderson in the future.

I received Torch from the publisher. This review is one hundred percent my own honest opinion.