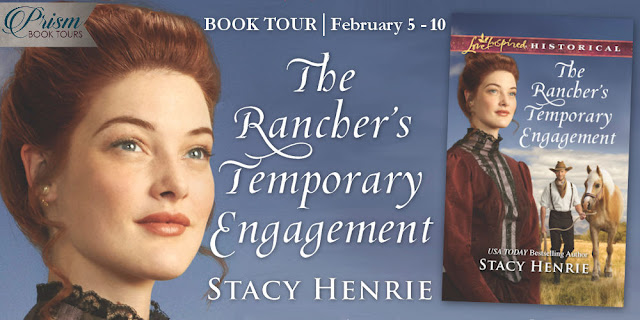 
We hope you enjoyed the tour! If you missed any of the stops
you can see snippets, as well as the link to each full post, below:

I’m excited to share with readers my fifth Love Inspired Historical, which is also the first in a three book series set in and around Sheridan, Wyoming in the late 1890s and early 1900s. This particular story was fun to write because I was able to give a nod to my love of England through my British hero Edward and give my smart, no-nonsense heroine Maggy an unusual profession as a female Pinkerton agent...

"I fell in love with the main characters and descriptions of the scenes were very vivid. . . . This is my first book by Stacy Henrie, I will definitely have to read more of her books. I really enjoyed this book."

"I always love how Stacy Henrie's books transport me to the setting with rich historical details. The characters really came to life against the backdrop the author set and while it's a relatively quick read, that's partly because I couldn't put it down! . . . Loved the sweet romance and fascinating history!"

“You are going to ruin this investigation,” she hissed. “Could you have looked any more appalled at playing the role of my fiancé?”

“Are you mad?” Edward countered, keeping his voice equally low. “Of course I’m going to be shocked and downright annoyed when you announce such a ridiculous fiction.”
Maggy crossed her arms and glared at him. Her eyes had turned a dark cobalt. “There wasn’t time to ask how you felt about it. Besides I told you that I was coming up with a role.”

"The Rancher’s Temporary Engagement is a fabulous historical that should not be missed. I had it read in just a few hours and it was time well spent. I highly recommend this for those who love a good, sweet, clean, heartwarming book that, also, has a touch of mystery and suspense.
A well deserved 5 plus stars."


The Power of Words - Review

"Stacy Henrie brings something intangible to every story that she writes; she just has a special touch that’s hard to define. All the details that I love are present in The Rancher’s Temporary Engagement – character depth, historical detail, humor, romantic tension. And then there’s the emotional tug that comes from characters who don’t seem fictional at all, but easily identifiable people who face similar struggles as we might, only in a different setting. While I’ve enjoyed all that I’ve read by this author, this book holds a special place in my heart."

Unpinning her hat, Maggy used it to fan her flushed face. She shut her eyes and willed herself to breathe through the pressure in her chest. She was safe—no one was going to harm her ever again. Especially not a man. Detective skills weren’t the only things she’d learned in the last six years; she’d also learned how to take care of herself.

"I was surprised by the depth and sincerity of Henrie's writing. In such a light genre, many inspirational authors shy away from the grittier aspects of the time period. Henrie handles both the bad and ugly with honesty and a deeper message of hope. As Maddy slowly watches the way Edward weaves his faith through his daily life, Henrie also urges us to "see His hand in everything." The impact of Edward's faith in God and in Maddy, as she unravels the mystery is more than empowering, it's a reminder of the true meaning of redeeming love."

"The romance is sweet and tender and very believable and the setting is hot, dusty, and perfect for the times. I couldn't put it down and was swept away for a time, which was completely fine with me. If you love historical mystery romances, dime novels, and mysteries, this one is for you."

"I couldn’t put the book down, the story kept me on my toes….just when I thought I knew what was going on things changed slightly and I started second guessing my thoughts. It really is a great story I highly recommend you read it!"

Q: What was your first impression of Edward?
A: Ha! Stubborn and reserved, for sure. But also handsome and kind to his staff.

"Peppered with humor and gentle truth, The Rancher’s Temporary Engagement is a great read from start to finish! Henrie’s sense of timing shines, as well as her ability to create dimensional characters who quickly feel like dear friends. The friendship-turned-romance is swoony and sweet, and the suspense gives the plot purpose without overpowering it. Stacy Henrie’s novels are always wonderfully enjoyable, and this one is no exception!"

“Are you always this obstinate, Mr. Kent?” Maggy asked, jerking his thoughts back to the unpleasant scene unfolding on his porch.

She was accusing him of obstinacy? He climbed the steps in an effort to keep her from barging her way inside. An action he wouldn’t put past her. “Are you always this persistent?”

Her eyes brightened with amusement. “I wouldn’t be one of Pinkertons best detectives if I weren’t.”

"I loved this book! It’s a quick, captivating read and I loved the writing style of Ms. Henrie. She has a beautiful way of pulling the reader into the heart of the story instantly and making them feel apart of the whirlwind of fun. I loved Edward and Maggy’s characters. They were perfectly chiseled and true-to-life."

His unexpected show of confidence in her abilities to come up with a solid cover story brought her earlier idea forward at last, in full form. “I’m Maggy. Edward’s fiancée,” she finished with a triumphant smile. “Isn’t that right, darling?”

Turning toward him, Maggy only had a moment to register the shock in Edward’s gray eyes before his mouthful of tea came spewing out—all over her.

"A feisty, capable and determined detective—who happens to be female—and a British transplant to Wyoming intent on proving his worth as a rancher combine for a delightful read...

With memorable characters and plenty of culprits, this book is a suspenseful, yet delightful, read."

I Am A Reader - Excerpt

“Fine.” Edward let his shoulders slump. “I won’t get into fisticuffs with Howe.”

One corner of Maggy’s mouth lifted. “You would get into fisticuffs for me?”

He sensed she meant it in a teasing way, but he couldn’t bring himself to jest about something he felt strongly about. “Yes, Maggy.” He placed his hand over hers where it still rested near his heart—just as it had the other day when they’d stumbled into each other. “I would.”


Among the Reads - Review

"I’m always so glad to find new authors I like. Stacy Henrie is now on my “buy as soon as it is released list”. The Rancher’s Temporary Engagement was a great story with mystery, romance, and life lessons about the love of God."

"The Rancher's Temporary Engagement was just like its predecessors, a truly fun read with delightfully generous amounts of romance and danger. And the overarching theme that each person is of value is an important reminder to every person who has ever doubted their own worth...which is probably every single one of us."

Stepping in front of him, she gripped his face between her palms. The heat of the fire baked her back, but she wouldn’t give up on Edward, not without a fight. And a fight could well be the result of what she was about to do.

She tipped his head toward her. Then, ignoring the steely quality in his gray eyes, she pressed her lips firmly to his. His jaw stiffened briefly beneath her hands, but Maggy didn’t let it deter her. She poured all the fears and joys she’d experienced over the last month into her kiss.

For the Love of Books - Review

"I really enjoyed this story! I loved the characters, the story line, the dialogue, Stacy's writing style. It was all done beautifully."


And don't forget to enter the giveaway below, if you haven't already... 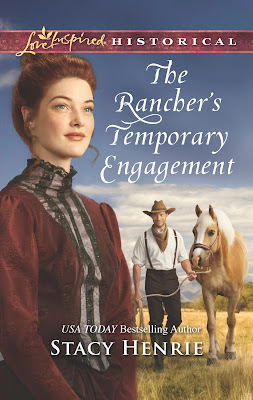 The Pinkerton agent that Edward Kent hired is intelligent, capable—and unexpectedly female! Though shocked to learn that Maggy Worthing will be investigating the threats to his Wyoming horse ranch, Edward needs to find the culprit. And if that means a temporary engagement to give Maggy a cover story, he’ll play along with the feisty detective.

Maggy always gets her man—at least when it comes to solving crimes. The young widow refuses to marry again and land under another husband’s thumb. Unmasking Edward’s enemies will earn her a longed-for promotion…but the heart has its own mysteries. Could working together with the handsome English aristocrat spark a real and loving partnership? 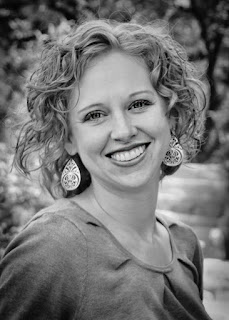 USA Today bestselling author Stacy Henrie is the author of western romances and the Of Love and War series, which includes Hope at Dawn, a 2015 RITA Award finalist for excellence in romance. She was born and raised in the West, where she currently resides with her family. She enjoys reading, road trips, interior decorating, chocolate, and most of all, laughing with her husband and kids.

Posted by Amybooksy at 9:47 AM