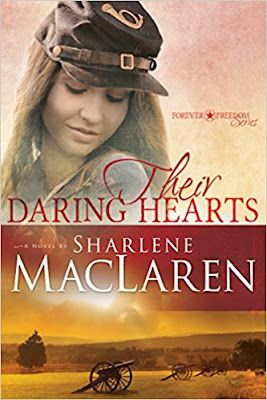 Levi Albright rebelled against his Quaker roots to fight for abolition in the Union army in the first year of the Civil War. Two years later, 19-year-old destitute orphan Josephine Winters, with chopped hair, boy’s clothes, and new name, “Snipp,” enlists in the Union army out of sheer desperation.
Just over five feet tall and barely weighing as much as a newborn calf, Snipp seems to Levi to be barely old enough to hold "his" gun. But despite being teased by the regiment, Snipp quickly earns admiration for skill with a musket and unequaled bravery. When Levi explains one night that he is a Quaker leading a regiment, it leads to a late-night discussion of faith and a developing friendship.
But Snipp’s secret can only be hidden for so long. After an injury forces Josie to reveal her real identity, Levi is angered by her deception. Worse, Josie is marched out of the company without a chance to explain—or even say goodbye. Will their friendship survive? Or will the hatred saturating the war-torn nation affect even the heart of a peace-loving Quaker?

Their Daring Hearts is book two from the Forever Freedom series. I loved book one so much that I preordered this one six months before it was released. I am so glad I did! I was thrilled with every single page. Sharlene MacLaren surely knows how to craft a great story- this one included . I admired Josie and her strength to go outside her comfort zone to help her family. Levi was another character I enjoyed and I admired his faith.

Their Daring Hearts is most definitely a must read and I highly recommend it. I cannot wait until book three goes up for preorder, too.

I purchased this copy for my personal collection. Therefore, was not obligated to write a review. This review is 100% my own honest opinion.