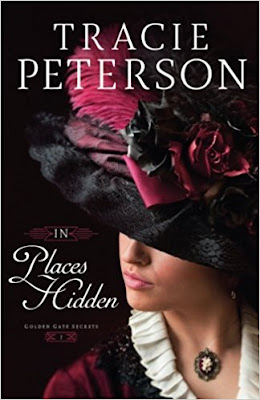 On her way to San Francisco to find her brother, Caleb, who went missing three months ago, Camriann Coulter meets Judith and Kenzie, who both have their own mysteries to solve in the booming West Coast city. The women decide to help each other, including rooming together and working at Kenzie's cousin's chocolate factory.Camri's search for her brother, an attorney, leads her deep into the political corruption of the city--and into the acquaintance of Patrick Murdock, a handsome Irishman who was saved from a false murder charge by Caleb. Patrick challenges all of Camri's privileged beliefs, but he knows more about what happened to her brother than anyone else. Together, they move closer to the truth behind Caleb's disappearance. But as the stakes rise and threats loom, will Patrick be able to protect Camri from the dangers he knows lie in the hidden places of the city?


In Places Hidden is the first installment from Tracie Peterson’s new series, Golden Gate Secrets. I thought it was good. I found it interesting to see what San Francisco was like over one hundred years ago. The story had some suspenseful element to it that kept me wanting to know more.
I give In Places Hidden 3 ½ stars and look forward to see what happens in the next book from the Golden Gate Secrets series.
I received this from the publisher. This review is 100% my own honest opinion.
Posted by Amy C at 8:41 AM