Genre:  Historical, Regency, Romance, Suspense
Publisher: Cedar Fort
Publication date: March 13, 2018
Prompted by her mysterious origins, young English heiress Letty Leighton seeks to establish a Utopian community called New Hope. To do this, however, Letty must marry African explorer Patrick Marlowe, an unconventional man who proves as hard to control as the residents of New Hope. Together they must confront an unknown enemy seeking to destroy both of their dreams. This inspirational romance novel belongs on the bookshelf next to books by Anita Stansfield, and Julianne Donaldson.
GOODREADS | AMAZON

Catherine McGreevy
Author of clean, inspirational fiction
The daughter of a foreign-service officer, Catherine McGreevy attended international schools in France, Spain, and Morocco. During her time abroad she learned to appreciate other cultures as well as the ideals that make America special. A true book-worm, she dreamed seeing her own novels on a shelf next to those of her favorite writers, including Mary Stewart and Elizabeth Peters.
After majoring in Communications (Journalism) with a minor in English at Brigham Young University, she later earned her Secondary Education Teaching Credential at Cal State Fullerton, and taught high-school and middle-school English before moving to Northern California.
A history buff, Catherine lives in Northern California’s gold country, where she has been known to don a bonnet and petticoats to re-enact the past with the Sierra Nevada Mormon Pioneers, appearing in parades and at Sutter’s Fort and the Gold Discovery site in Coloma.
Her first historical novel, Chance’s Bluff, was released by Cedar Fort Publishing in January, 2018. A Place Called New Hope follows in March.
GOODREADS | FACEBOOK | TWITTER | BLOG

1. How did you get started as an author?  Who or what inspired you?
When I was a child, my parents took my siblings and me to the local library every Saturday, which was my favorite place in the world. I loaded up my arms with as many books as I was allowed to check out, had them all read by Wednesday, and then waited impatiently for next Saturday. In sixth grade, my schoolteacher had us write an alternative ending for a story we were reading in class. From then on, all I could dream of was being a writer and seeing my books on the library shelves next to those of my favorite authors. I could think of nothing better than bringing as  much enjoyment to other readers as those writers did to me.
2. What is some advice you would give to another writer who is just starting their writing career?
Finish your story! Plow through the entire rough draft, terrible as it might seem, before you go back and fixing anything.  Many people start writing books, but most give up after 50 or 100 pages. if you go back to polish every sentence and rewrite every chapter, you’ll likely never get to the end. Realize that it is a major accomplishment just to finish a story. Once you’ve hammered out the complete rough draft, imperfect as it is, THEN go back, tear it apart, and start fixing those things that bother you.
3. If you could go to tea with one of the characters from A Place Called New Hope, who would you go with and why?
The hero, Patrick, definitely! He is a good listener, respects what women have to say, even if he doesn’t agree, and has many fascinating adventures to tell about. Although he is blunt to powerful people he dislikes, and can be annoyingly stubborn, he has a kind, compassionate heart.
4. What inspired the idea for A Place Called New Hope?
Like my heroine, Letty, I am an idealist, always trying to come up with ways to solve the world’s problems. I also love historicals set in Victorian England. When a little research showed me how many people from that era, including Charles Dickens and many others, grappled with society’s problems, I thought, “Why not write a story that combines my favorite genre, historical romance, with a protagonist who wants to change the world?”  I’d just read a fascinating biography of Sir. Richard Burton, so I already had a model for my explorer hero. However I had to be careful not to let his story overshadow hers. Maybe I’ll write a sequel where the couple go to Africa together.
5. What do you want readers to take away from reading A Place Called New Hope?When I grew up, the term “Victorian” was used as an epithet for “old-fashioned” and “stuffy.” I have since learned that the era was very progressive in the best sense of the word, in that many people, religious and otherwise, fought to improve conditions that, thanks to their efforts, we no longer consider acceptable. It was an era of incredible vitality and energy, which led the way for the best of the world we now live in, including quality of life, universal education, and the chance for upward mobility for the lower classes. I would hope that a reader would take away the same zeal and optimism that inspired Letty and Patrick to work toward making the world a better place.
6. What is your current WIP?  What can you tell us about it?
My current WIP is a sweeping adventure set during the European revolutions of 1848. There are a lot of exciting plot elements, but basically it is about an impulsive and romantic young girl who will stop at nothing to prevent her father from separating her from the ruined young man she loves–even throwing aside her family and good reputation. But in a world of upheaval, violence, and changing loyalties, can she succeed?

I apologize for not including more current authors, of whom there are many I love and read. However these are the ones I have gone back to and re-read over and over throughout my life. They are like comfort food, because I know I’ll always enjoy them, no matter what!

10 Behind the Scenes Facts about the Book

“Ye’ve found it then.” The deep, cracked voice made her jump. Letty twirled, clutching the locket closer. Henry chuckled. “Just now, ye looked as she did. Desperately crawlin’ on your hands through the reeds, as if everything depended on it. But ye’re the one who found it, while the other lass went home empty handed. But that be the way of things, ain’t it? Nothin’s fair, not in this life nor the next.” “She?” “One of yer new ones, there, what ye brought here.” He nodded his grizzled head toward New Hope. “The lively one with the red hair. Her gentleman friend did give the trinket to her, and no sooner had he left than she took it off to look at it and dropped it in the reeds. Careless of her.” Henry seemed to read Letty’s thoughts, as if her face was registering every emotion. “Yes, I saw them in this very spot, many a time, her and her fellow, but never did they know it. I’ve been watching you these ten minutes past, nor did you ever know it neither. Not till I wanted you to.”

A Place Called New Hope is a good, clean read. Letty was not as a likeable as Patrick, but she grew on me the last quarter of the book. The story had some interesting historical tidbits that I did not know prior to reading this. The plot was slightly predictable but still enjoyable.

I give A Place Called New Hope 3 1/2 stars. I will look for more by this author in the future. This one is definitely a must read. 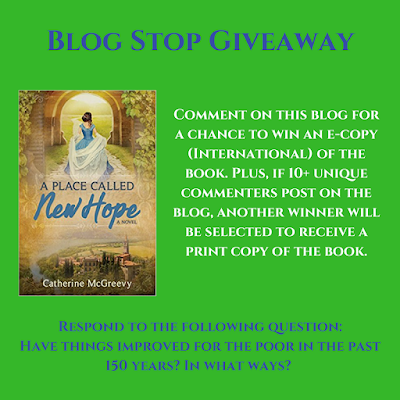