Songs for Lucy
by Philip Wilson 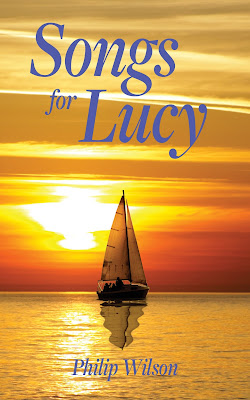 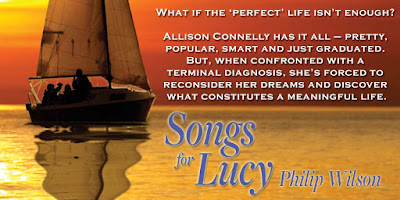 
It’s spring, and Allison Connelly has it all – pretty, popular and smart. With a summer job teaching tennis and starting Harvard Law School in the fall, Allison plans on a successful law career, marriage and kids – and dreams of becoming a Supreme Court Justice.

When relentless headaches drive her to her doctor, Allison receives a terrifying diagnosis that destroys her plans and imperils her life. Devastated, Allison struggles to accept her
shattered dreams and uncertain future. One night, she happens into a small-town pub and, on a whim, takes a job singing, finding solace and a measure of peace in her music. She settles in the town, and from that small beginning finds love, a new life and a new reason for living.
~~~~~~~~~~~~~

Dean Richardson went to the podium, looked back at Allison, and smiled. “It is now my great pleasure and privilege to introduce Allison Connelly to give the Valedictory Address. Allison has made an extraordinary contribution to our school. Not only has she achieved the highest academic standing in her graduating class, but she captained the tennis team – which won the Northeastern Intercollegiate Championship – and was on both the swim and debating teams. Rumor has it that she also sings occasionally at one of the local pubs. I really don’t know when she found time to study. It had been my hope that Allison would stay at BHU and continue with our MBA program, but... I am delighted to announce that she has been accepted into Harvard Law School. While I’m very sorry to lose her, Allison is the first BHU grad to be accepted into HLS in almost a decade and I’m sure you will all share my pride in her achievement. Allison.”

There was a burst of applause. Prepared to stand and approach the podium, she again felt a searing pain over her left eye. She remained seated and again breathed deeply, fighting the pain.

To Allison’s great relief, the pain dissipated. She stood, walked confidently to the podium, and looked out at her classmates and others in the auditorium.

Allison paused and the audience waited expectantly, anticipating the usual salutation acknowledging students, friends and families, alumni, the dean, and the faculty. 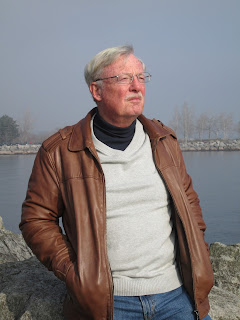 Philip Wilson is a retired financial executive who spends winters in Florida and summers sailing on the Great Lakes in his 32-foot sailboat. Songs for Lucy is his second book. His first, The Librarian, was rated one of the best reviewed books of 2017 by IndieReader and featured in the Huffington Post. Learn more at www.philipmwilson.com.

Philip Wilson will be awarding a signed paperback copy of the book to a randomly drawn winner via rafflecopter during the tour.

Songs for Lucy is the first book I have read by Philip Wilson, but guaranteed it will not be the last. I felt connected to Allison Connelly right from the beginning. She was the type of character I enjoy reading. She is a smart, strong, and fun woman. I had no problem rooting for her until the end. I just had to see where she would find herself.

I give Songs for Lucy four stars and look forward to more by this author in the future.