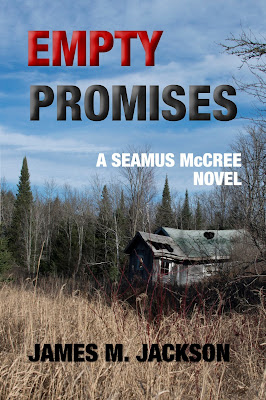 If you love the suspense and plot twists of domestic thrillers, this page-turner will be for you. Seamus McCree’s first solo bodyguard assignment goes from bad to worse. His client disappears. His granddog finds a buried human bone. Police find a fresh human body.

His client is to testify in a Chicago money laundering trial. He’s paranoid that with a price on his head, if the police know where he’s staying, the information will leak. Seamus promised his business partner and lover, Abigail Hancock, that he’d keep the witness safe at the McCree family camp located deep in the Upper Peninsula of Michigan’s woods.

Abigail is furious at his incompetence and their relationship flounders. Even his often-helpful son, Paddy, must put family safety ahead of helping his father. Seamus risks his own safety and freedom to turn amateur sleuth in hopes he can solve the crimes, fulfill his promise of protection, and win back Abigail. Wit and grit are on his side, but the clock is ticking . . . and the hit man is on his way.

Dread joined us in the car. Even normally bubbly Megan grew silent.

Loggers had cut a narrow lane through the sixty-foot spruce I had watched come down at the beginning of the Grade, leaving most of the tree in place and towing the cut section to the side. They’d wasted no time on smaller branches littering the road and were opening up a one-lane path. I tiptoed the Outback over the debris and moved through the gap.

At first the downed trees were scattered, although limbs and branches dotted the entire road. But the further north we drove, the worse the damage became until the downed trees were a nearly continuous hazard. Paddy frequently left the car to remove branches with sharp breaks that might puncture a tire. I was regretting we hadn’t taken my old beater truck into town with its multi-ply tires. The Outback carried a donut spare, which wouldn’t last thirty seconds on the gravel roads. We had yet to see any other cars or people.

By the time we passed the five- and six-mile markers without any letup in the damage, tightened metal bands had taken up permanent residence around my chest. I feared for Elliot. I feared for my property. I worried whether I’d get a flat. Whether there would still be a hotel room if I had to send Paddy and Megan to Tall Pines. Megan, on the other hand, had given up her concerns and was in the back seat, singing along with a CD, a cheerful canary amidst the devastation. 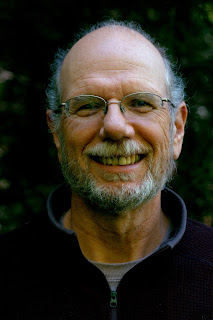 James M. Jackson authors the Seamus McCree series consisting of five novels and one novella. Jim splits his time between the deep woods of Michigan’s Upper Peninsula and Georgia’s Lowcountry. He claims the moves between locations are weather-related, but others suggest they may have more to do with not overstaying his welcome. He is the past president of the 700+ member Guppy Chapter of Sisters in Crime. You can find information about Jim and his books at http://jamesmjackson.com. You can follow him on Facebook, Twitter, Goodreads and/or Amazon.

James M. Jackson will be awarding the chance to name a character who will appear in FALSE BOTTOM (Seamus McCree #6) to a randomly drawn winner via rafflecopter during the tour.


Empty Promises is the fifth installment from James M Jackson’s Seamus McCree series. I have not read any other books in the series, so I was not sure what to expect when I pick this one up. I thought it was a pretty good suspense filled mystery. I did not want to put it down. And I did not until I finished the whole book. It is not good. I hope to soon find the previous books from the series and see what had happened prior to this one.

I give Empty Promises four stars.

I received this book from the publisher. This review is 100% my own honest opinion