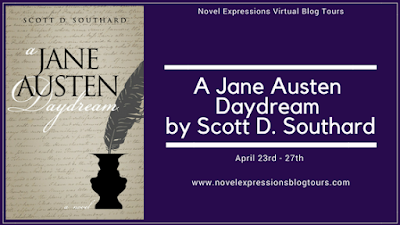 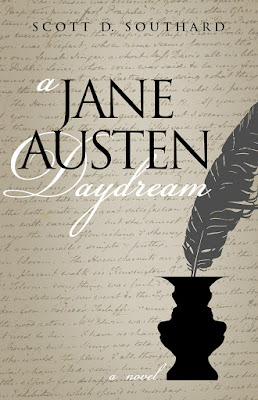 Now with a new foreword and an updated cover showcasing Jane's own handwriting, this re-imagining of Jane's life continues to charm and delight readers of literary fiction worldwide.
*************
All her heroines find love in the end–but is there love waiting for Jane?

Jane Austen spends her days writing and matchmaking in the small countryside village of Steventon, until a ball at Godmersham Park propels her into a new world where she yearns for a romance of her own. But whether her heart will settle on a young lawyer, a clever Reverend, a wealthy childhood friend, or a mysterious stranger is anyone’s guess.

Written in the style of Jane herself, this novel ponders the question faced by many devoted readers over the years–did she ever find love? Weaving fact with fiction, it re-imagines her life, using her own stories to fill in the gaps left by history and showing that all of us–to a greater or lesser degree–are head over heels for Jane.
Scott shares with is why readers would like his book:
When Jane Austen was alive, her name was not on any of her published novels. Upon passing (at an early age), her sister, Cassandra, destroyed her letters. When Jane’s name as the author of her books became known to the public, her nephew (James Edward Austen-Leigh) wrote an autobiography about her. He painted her as a proper individual, who would put down her writing when something more important was going on. This was a Jane who knew her place… which is definitely not the case when you begin to dive into the letters by Jane that were discovered later!
My hope in writing A Jane Austen Daydream was to give Jane a new life in one of her stories. This is her life “re-told” as a novel. To call it a historical fiction though, would be unfair to the entire genre. It is a dream, a creative adventure for her, where she might mingle with characters and plot points that emerge later in her stories. Plus, it is an opportunity for Jane to find the one thing that each of her heroines strive for… a love in equality, and not station.
This is a book for Austen fans, but also for those looking for a new kind of novel. For Daydream is in many ways an experimental work of literary fiction. There are new twists and surprises in this book. If I did what I was aiming to in the telling, you will have a new and surprising experience, and that is true if you are an Austenite or not.
2018 marks the fifth year since the original publication of this book. Since then I’ve heard from many fans of the novel and it only seems to grow. I’m excited to see it being released again like this and I hope more readers will take the time to meet Jane.

The Musings & Artful Blunders of Scott D. Southard where he writes on far-ranging topics like writing, art, books, TV, writing, parenting, life, movies, and writing. He even shares original fiction on the site. Currently, Scott resides in Michigan with his very understanding wife, his two patient children, and a very opinionated dog named Bronte. 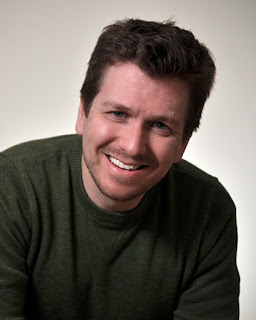 Scott D. Southard, the author of A Jane Austen Daydream, swears he is not obsessed with Jane Austen. He is also the author of the novels: My Problem with Doors, Megan, Permanent Spring Showers, Maximilian Standforth and the Case of the Dangerous Dare, and 3 Days in Rome. With his eclectic writing he has found his way into radio, being the creator of the radio comedy series The Dante Experience. The production was honored with the Golden Headset Award for Best MultiCast Audio and the Silver Ogle Award for Best Fantasy Audio Production. Scott received his Master's in writing from the University of Southern California. Scott can be found on the internet via his writing blog "

Author Links:
Amazon US
Audible
Author Website
Highlighted Reviews:
"For those of you who are exhausted by the innumerable retellings of Austen's novels, this is a style entirely new.... be rewarded by a quick paced novel unlike any you can ever have read, which injects new ideas and possibilities into the world of Jane Austen." -Laura Boyle, The Jane Austen Centre
"Mix one-part biography and one-part historical re-imagining...add witty characters and some surprises and you have A Jane Austen Daydream. This was a delightful read." - Amelia Rodriguez, Jane Austen Society of North America
"...Lovely, thought-provoking novel. Fans of Austen will adore this book." - Lori Nelson Spielman, author of The Life List.
"Southard has taken the facts about the great author and woven them into a credible, touching, and also entertaining portrait of a life." -Historical Novel Society
Blog Tour Schedule:
April 23rd”
Book Spotlight-The Writing Desk
April 24th
Book Review – Kate Braithwaite
Book Spotlight – before the second sleep
April 25th
Book Spotlight Let Them Read Books
April 26th
Book Spotlight – Locks, Hooks and Books
Book Review – Pursuing Stacie
April 27th
Author Interview -Layered Pages