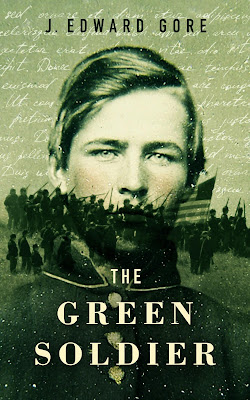 ~~~~~~~~~~~~~
GENRE: YA Historical fiction
~~~~~~~~~~~~~
BLURB:
John Gore is eighteen years old in 1862 rural Kentucky. He has struggled his entire life with stuttering and the ridicule associated with it. Unable to speak well, he has focused on writing. Seeing the opportunity for advancement in the military—and with it, respect—John joins the Union army. Unfortunately, his stuttering prevents him from warning a friend of an enemy attack and John watches his friend die. He is racked with guilt and the fear that others saw him fail at the key moment . . . a fear that proves prescient.
John soon meets a girl but they must forge a friendship and then courtship through letters, allowing him to express to her what he can’t say in person. Meanwhile at home, John’s impetuous younger brother causes trouble with garrisoned Union troops angry at Southern sympathizers.
~~~~~~~~~~~~~
EXCERPT
There’s been some light fighting every day with the rebels close behind us, and especially once we settled into Knoxville. There were some rebel sharpshooters who dug a rifle pit just outside our walls and they were picking off some of our soldiers now and then. A boy would be talking or looking around and then he’d either scream or just fall back dead. A regiment with the Second Michigan was ordered to take care of those sharpshooters. Our men ran out, but they were fired upon, and when they got to the pit they found more than they’d bargained for. The Johnnies were in the woods waiting for them and fired without mercy. Less than half of our soldiers came back alive. Now their sharpshooters target our officers. Three days ago a lieutenant was giving out orders and in the middle of his talking he just fell over. Graveyard dead. He never knew it.
~~~~~~~~~~~~~
AUTHOR Bio and Links:
Edward purposely avoided history classes in college because he felt they were boring. Years later he read the Shaara trilogy, opening his eyes to how fascinating the Civil War could be. He recalled as a boy his grandmother telling him of his ancestor, John Gore, who fought for the Union. Visiting battle sites and participating in reenactments has made the Civil War more than just pictures and words. Instead he could feel the fear, excitement, grief and anger.
Born and raised in central Kentucky, not far from John’s birthplace, Edward currently lives outside of Nashville, TN with his wife, two kids and a goldendoodle.
https://www.facebook.com/13thKyCivilWarhistoricalfiction
https://www.goodreads.com/author/show/18764476.J_Edward_Gore
~~~~~~~~~~~~~
GIVEAWAY
J. Edward Gore will be awarding a $25 Amazon/BN GC to a randomly drawn winner via rafflecopter during the tour.

I thought J Edward Gore’s debut, The Green Soldier, was pretty good. I enjoyed this Civil War era book. I thought it was pretty good. It is an easy and quick read that I had read in just a few hours. I was intrigued with John’s story. I admired his courage throughout the book.

I give The Green Soldier four and a half stars. I recommend it to other readers who enjoy clean Civil War era books.