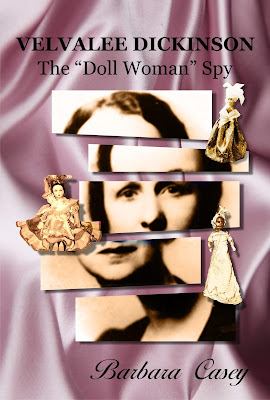 ~~~~~~~~~~~~~
GENRE: Nonfiction/Biography/True Crime
~~~~~~~~~~~~~
BLURB:
Velvalee Dickinson was born in Sacramento, California, graduated from Stanford University, married three times, and then in the early 1930s moved to New York City where she eventually opened her own exclusive doll shop on the prestigious Madison Avenue. It was there that she built her reputation as an expert in rare, antique, and foreign dolls. She traveled extensively around the country lecturing and exhibiting her dolls while building a wealthy clientele that included Hollywood stars, members of high society, and other collectors.
When medical bills started to accumulate because of her husband’s poor health and business started to fail with the onset of World War II, she accepted the role as a spy for the Imperial Japanese Government. By hiding coded messages in her correspondence about dolls, she was able to pass on to her Japanese contacts critical military information about the US warships. After surveilling Velvalee for over a year, the FBI arrested her and charged her with espionage and violation of censorship laws. She became the first American woman to face the death penalty on charges of spying for a wartime enemy.
Velvalee Dickinson: The “Doll Woman” Spy is a carefully researched glimpse into the “Doll Woman’s” life as a collector of dolls, and as the highest paid American woman who spied for the Imperial Japanese Government during World War II.
~~~~~~~~~~~~~
EXCERPT
There was a great deal of interest in the Velvalee Dickinson doll shop, which attractively displayed her vast collection of the latest dolls from Paris and England, as well as other parts of the world, particularly since at that time the import of foreign dolls of all types had been cut off due to the war. There is a record, in fact, that one of her purchases, from Howard F. Porter of the Old Print Exchange, New York City, was four early wax dolls made about 1770 and presented in 1808 to Mary Dance, the famous British actress. These valuable dolls, which represent a clergyman and wife, and a soldier and wife, are made of yellow and pink wax over wood, and previously had been sold to Howard Porter by Mary Dance’s descendants.
Another doll that was part of Velvalee’s extensive collection was the Adelina Patti character doll. Patterned after the world-famous opera singer who was born in Madrid, Spain, in 1843, the Adelina Patti china shoulder head doll was created at the Alt, Beck, and Gottschalk porcelain factories of Nauendorg, Germany in the early 1880s. Simon and Halbig, based in Thuringen, Germany, fashioned the doll with authentic antique earrings and necklace, and a beautiful velvet and antique lace gown, making the doll quite valuable. This doll eventually found its way into the collection of Mrs. Hazel Leland, grandmother of fourteen grandchildren.
Always in the market to build up her extensive, eclectic high-quality inventory, in February 1940, Velvalee bought the rare Charles Jopp dolls to add to her own valuable collection. A month later, an article appeared in the Science Christian Monitor publicizing that the dolls were for sale:
When Dolldom Goes on Parade
A Part of the Rare Charles Jopp Collection
Walking dolls, nursemaid, boy bicycler, fashionable ladies - belonging in collection once owned by Charles Jopp, Danvers, Massachusetts, now by Mrs. Velvalee Dickinson of New York City
The Velvalee Dickinson doll store also had a few detractors, however. Doll collector, Mrs. Fred Mason of Chicago, would describe visiting the Madison Avenue store, “I didn’t like the shop…. It seemed sinister, although of course I didn’t know the owner was a spy.”
It was through Velvalee’s correspondence, frequent advertising, and lectures around the country that she made a name for herself as an expert in rare dolls. She exhibited her dolls in prestigious antique shows, and one doll in particular, an 18th century wooden doll, was mentioned in The New York Times in 1940. Her opinion was sought and respected on all doll subjects, and her frequent travels across the United States were treated as news worthy in newspapers and magazines because of her celebrity status.
~~~~~~~~~~~~~
AUTHOR Bio and Links:
Barbara Casey is the author of several award-winning novels for both adults and young adults, as well as book-length works of nonfiction, and numerous articles, poems, and short stories. Her nonfiction true crime book, Kathryn Kelly: The Moll behind Machine Gun Kelly, has been optioned for a major film and television series. Her nonfiction book, Assata Shakur: A 20th Century Escaped Slave, is under contract for a major film. In addition to her own writing, she is an editorial consultant and president of the Barbara Casey Agency. Established in 1995, she represents authors throughout the United States, Great Britain, Canada, and Japan.
In 2018 Barbara received the prestigious Albert Nelson Marquis Lifetime Achievement Award and Top Professional Award for her extensive experience and notable accomplishments in the field of publishing and other areas. Barbara lives on a mountain in Georgia with her husband, and three pets who adopted her: Benton, a hound-mix; Reese, a black cat; and Earl Gray, a gray cat and Reese’s best friend.
www.barbaracaseyagency.com
www.amazon.com
www.barnes&noble.com
www.goodreads.com
~~~~~~~~~~~~~
GIVEAWAY:
Barbara Casey will be awarding a $20 Amazon/BN GC to a randomly drawn winner via rafflecopter during the tour.


Velvalee Dickinson: The Doll Woman Spy is an interesting read. It tells the true story of Velvalee Dickinson. I have never heard of her before reading this book. She was an American woman charged with spying for Japan during the World War II. It was fascinating to learn about her, as well as, her friendship with Eunice Kennedy Shriver.

I give Velvalee Dickinson: The Doll Woman Spy five stars. I recommend it for readers who like to read about true crime and historical events.