VBT and Giveaway: SOUP The Future Is Past and Present by Travis Haugen

SOUP The Future Is Past and Present
by Travis Haugen 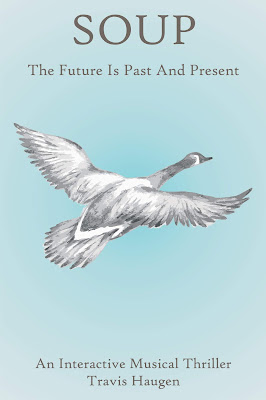 ~~~~~~~~~~~~~
GENRE:   Adventure/Mystery
~~~~~~~~~~~~~
BLURB:
Scott Yonge exploded onto the national consciousness at the 2001 Garrett Awards and quickly rose to legendary status on the wings of his music and his whirlwind romance with independent film actress Michelle Zoe. What should have been a perfect life was interrupted by an ultra-right wing militant group called the American Freedom Force and its leader, Colonel Randall, who forces Scott to choose between his life and that of his son. After his heroic sacrifice, his family is left to pick up the pieces and forge ahead to a future in the vacuum he left behind.

Now, in 2021, his son Hedley inherits music for himself, becoming a star in his own right as technology gives new life to the medium. Scott's daughter, affectionately known as Soup, throws herself into unravelling the mysteries of her family's history. Michelle commits herself to keeping them all together and trying to make sense of life without the one she loves. Through it all, the AFF looms in the shadows, threatening to resurrect the pain they have just begun to overcome.


~~~~~~~~~~~~~
EXCERPT
August 25, 1967
The weekly outing had become something of a ritual for them. Friday nights, after supper, they would head out to the country with their hearts pumping and the radio blaring, riding on a wave of blinding optimism. They’d drive for hours, most times talking and laughing about nothing at all. Other times they’d settle into a comfortable silence, speaking without speaking.
They’d been silent for some time when the boy was drawn in by a pretty song on the radio. She was lost in it too, absorbed as though in a trance. The boy looked to his mother. She looked back with warm sadness in her eyes. He felt her love wrap around him as she smiled. She was about to say something when the crunch came. The boy could almost hear the sound of her silent scream as her head snapped to the side at an impossible angle. That’s all there was. He never got to hear what she wanted to say. 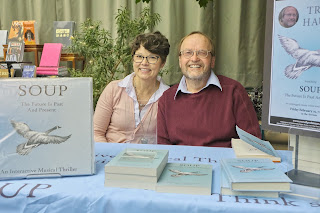 Travis was born and raised in the prairies of Saskatchewan, lived in Calgary for over 25 years and presently lives in Winnipeg, Manitoba.
Travis Haugen has spent forty years of his life touring on the road as a musician and has spent hundreds of hours in recording studios. Travis spends much of his time writing songs, writing stories, playing music and spending valuable time with his family and close group of friends.


~~~~~~~~~~~~~
GIVEAWAY
Travis Haugen will be awarding a $30 Amazon or Barnes and Noble GC to a randomly drawn winner via rafflecopter during the tour.

Soup: The Future Is Past And Present is an interesting read. The concept and style of the book is a little bit different than most books I have read. I did find it confusing at times but quickly caught on. It did make want to keep reading on to find out which way the story was going to go next.


I give Soup: The Future Is Past And Present three and a half stars. It is definitely worth a read.