Blog Tour and Giveaway: Falling for Provence by Paulita Kincer

Running a French B&B isn’t all wine and smelly cheese, Fia Jennings discovers as she tries to create a new life for herself and a smooth path for her teenage twins, while not—absolutely not – falling into a new romance. But she didn’t anticipate a handsome stranger showing up on her doorstep and sucking her into an art caper with dangerous overtones. Can she make a new life in France or will she retreat to the States and her broken marriage?

For years, I’ve been writing novels about women who run away to France.
In January 2018, I actually moved to France. Unlike the heroines in my stories, I took (dragged) my husband along. 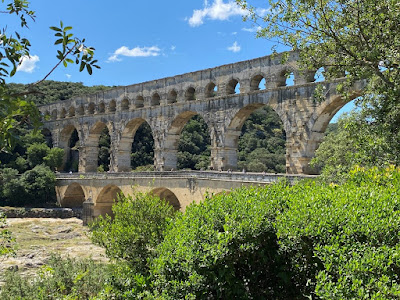 Was it all hearts and red wine? Not quite, but many mornings, as I step into the street to begin my morning run, I look up at the brilliant blue sky and the craggy mountains and just feel thankful that I’m in France.
I run past the bakery and smell the baguettes as they bake to a golden brown. I pause on the bridge over the river and take a picture in each season of the red-tile roofs of the houses built there, the mountains jutting behind the village. 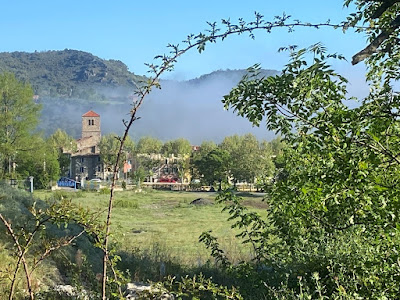 If my husband hadn’t decided to retire early, we might never have moved to France. At 62, he’d had enough of 40 years of working. He was ready to throw in his journalist’s notebook. But, we had always purchased our health insurance through his work. If he quit, we had no options for health insurance in the United States, other than healthcare.gov, which was $18,000 out of pocket for one year. Not feasible for most retired people.
If we stayed in the States, I could continue to teach, but I worked as an adjunct professor at a couple of colleges and also had income through my novels. It was a good supplement, but it couldn’t do much more than cover the insurance bill.
To move to France, we had to buy health insurance to receive a visa; it cost less than $1000 to cover both of us for the entire year. That’s a savings of $17,000. Our trip would practically pay for itself!
We sold our house and put the profit into an account that we planned to use to buy a new house in France.
The first few months, we traveled and housesat through Trusted Housesitters. We didn’t get paid, but we had places to stay throughout France and England as we explored what area we wanted to live in. We had adventures! Some not so good – bronchitis, a flood that isolated us from the rest of the world, a lost dog down a badger hole. And some amazing – the discovery of café Cognac, watching swans alight in the flooded fields as we walked dogs, seeing the musical Hamilton when we housesat in London. 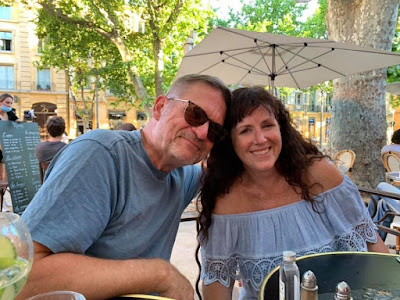 Finally, on our greatest adventure of all, we journeyed down to Quillan in the southwest part of France near the Pyrenees. We rented a house here for six months and our real French life began.
What had been a vagabond lifestyle, living out of suitcases, became a social whirlwind as we made friends – mostly Brits, some Americans and even a few French.
I remember reading blog posts about people who moved to France and made friends with other English-speaking people. I thought it was ridiculous. Now that I’m in the midst of it, I know how lonely it can be to have no one to speak to in your native language. Plus, it can be difficult to breakthrough with French people, but we aren’t giving up.
There’s the town flirt who, before Coronavirus, would double cheek kiss every woman he met. Now, as he drives past in his work truck, he calls out “I love you, chérie!”
The baker told me I can tutoyer, which means call him tu instead of vous. And the butcher is now a fan of ours ever since Earl bought him a tshirt from Bob Evans restaurants when we were in the States. The tshirt says “Go Pig or Go Home!” I’m not sure he understands it, but he will put it on to show us when we stop at the boucherie.
The fruit and vegetable seller at the market slips a free lemon or parsley into our bag when we stock up on market days. And I’ve had a few bicycle rides with a French friend who is married to an Englishmen, as she insists we speak only in French so that I can practice. If you think it’s hard to speak another language while having coffee, imagine while riding a bicycle.
I’m still working as a professor and I’ve added teaching English to Chinese children to my repertoire, so I don’t have the freedom to live a retired lifestyle, but most evenings find us gathering with friends. Their place, our place, a local café, Friday night fish and chips truck, the Thursday night market with music, and don’t forget the “bal” on July 13, the night before Fete Nationale. In spite of precautions for Coronavirus, people gathered and danced in the square. It was fantastique!
I had to leave behind my parents and my three adult children but would I do it again. In the words of the Edith Piaf song, “Non, je ne regrette rien.”


3rd picture: My husband and me in Aix en Provence celebrating our 30th anniversary

BUY the book here:
Amazon | Barnes & Noble | Kobo
***
You can enter the global giveaway here or on any other book blog participating in this tour. Visit/Follow the participating blogs on Facebook/Twitter, as listed in the entry form below, and win more entry points!

Tweeting about the giveaway everyday of the Tour will give you 5 extra entries each time! [just follow the directions on the entry-form] Global giveaway open to all 5 winners will receive a copy of this book

CLICK ON THE BANNER TO READ MORE REVIEWS A GUEST-POST, AND AN INTERVIEW

I had the pleasure of reading books by Paulita Kincer in the past and was excited to have the opportunity to her newest release, Falling for Provence. Apparently, this is a second installment from her A New Life in Provence. I have not read the first book, The Summer of France, and feel that this one could be read as a stand alone. Though, I wish I had read it before. I thought was a great read and gives me yet another reason why this author is fastly becoming one of my go to / must read authors. This one is full of romance, suspense, drama, and entertainment. I did not want to put it down.

I am giving Falling for Provence four and a half stars. I highly recommend it for readers who enjoy romantic books set in France. I will be looking forward to reading the first book in the series in the near future.

I received this book from the publisher. This review is 100% my own honest opinion.
Save
Posted by Amybooksy at 1:00 AM