Excerpt Tour and Giveaway: Arresting the Warlord by Gail Koger 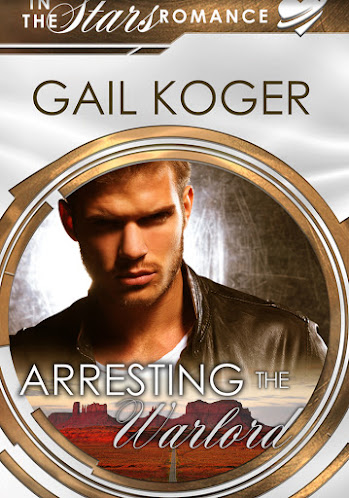 CeeCee Tsosie is a Navajo Nation police officer and shaman with the ability to control the weather. She’ll admit arresting Jake Jones, a Coletti Warlord, for speeding was not one of her better decisions. But hey, the law was the law and the drop-dead gorgeous warlord pushed every one of her buttons. She might have been a tad over-zealous with her rainstorm and stun gun, but the Jackass had it coming.

An alien serial killer is stalking the Navajo Nation. The Coletti Empire is hunting a galactic fugitive. Turns out they need each other’s help to stop the shapeshifting predator. Can she work with the Jackass? Can Jake convince CeeCee she’s the one? Only time, and the spirits will tell.

Brilliant hues of lightning sizzled around us.

“That’s one hell of a light show.” There was a touch of awe in Jake’s voice.

I quieted the storm. “The weather’s funny out here.”

“Kinda strange it only happens when a shaman’s around.”

“Go figure.” I grimaced. My head was killing me, and my badly bruised chest made breathing difficult.

“What are you doing?”

“You don’t smell like a Navajo,” Jake replied, turning me to face him.

A cold thread of dread snaked up my back. “Well, I am a Navajo.”

“Let’s do a taste test.” Jake licked the blood off my face.

I squirmed wildly. “Stop it! I’m not a fucking lollipop.”

“Lucy, you’ve got some ‘splaining to do. You’re not Navajo at all.” Jake took another lick. “I’ll be damned. You’re Dragos. Which explains how you can talk to the dead.”

“You can’t know that by licking my blood.”

Jake shrugged. “It’s a Coletti thing. How did a Dragos female end up in the middle of nowhere?”

“Some other time. The murderer is going to get away if we don’t go after him now.” I struggled to break his grip. Damn he was strong.

“Easy. You’re in no shape to go hunting.” Jake tapped his warrior’s bracelet. “Looks like you have a concussion, along with that gash on your head and a badly bruised sternum.”

Arrrgh. The ass wasn’t listening to me. “The sniper was the Chupacabra’s partner,” I practically shouted.

“It’s actually a Testavorr. They were thought to be extinct,” Jake said.

“Not a chance. I’ve decided to keep you.”

“What?” A bolt of lightning struck the ground a short distance away.

Jake hastily added, “As a partner. You’re a good cop.”

“I’m overwhelmed by your praise. Let me go or I’ll use my freeze ray on you again,” I bluffed.

Jake laughed. “If you could, you would have already. You have two choices. I take you back to our ship and have Shrek heal you or you can drink my blood. Which will have you in fighting shape within a couple of minutes. A word of warning. We saw you incinerate the Testavorr. If I take you back to the ship, my uncle will lock you up until the Overlord decides what to do with you. What’s it gonna be?”

Crap. I was screwed either way. “You can’t possibly want me as a mate.”

Jake shot back, “Who said I did? Partners, remember?”

The sneaky bastard was up to something. “I thought when a woman took a Coletti warrior’s blood it started the bonding process.”

“Nah, that’s a rumor started by our enemies,” Jake responded.

I looked at his aura. “You’re lying.”

“Am I?” There was a devilish gleam in his eyes.

“I can tell when someone’s fibbing.” 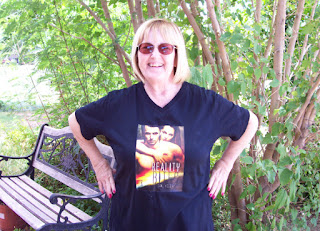 I was a 9-1-1 dispatcher for the Glendale Police Department and to keep from going totally bonkers – I mean people have no idea of what a real emergency is. Take this for an example: I answered, “9-1-1 emergency, what’s your emergency?” And this hysterical woman yelled, “My bird is in a tree.” Sometimes I really couldn’t help myself, so I said, “Birds have a tendency to do that, ma’am.” The woman screeched, “No! You don’t understand. My pet parakeet is in the tree. I’ve just got to get him down.” Like I said, not a clue. “I’m sorry ma’am, but we don’t get birds out of trees.” The woman then cried, “But… What about my husband? He’s up there, too.” See what I had to deal with? To keep from hitting myself repeatedly in the head with my phone, I took up writing.

Gail Koger will be awarding a $25 Amazon or B/N GC to a randomly drawn winner via rafflecopter during the tour.

a Rafflecopter giveaway
DON'T FORGET TO FOLLOW THE TOUR AND COMMENT
ON EACH STOP TO EARN MORE ENTRIES TO WIN!

July 21: Books to Light Your Fire

July 27: Musings From An Addicted Reader

July 30: All the Ups and Downs