Blog Tour and Giveaway: Legend of the Storm Sneezer by Kristiana Sfirlea 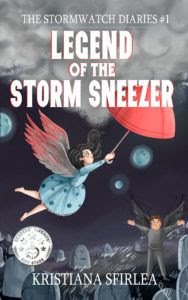 Book: Legend of the Storm Sneezer

Legend Seeker. Part-time Ghost Hunter. Time Traveler.Thirteen-year-old Rose Skylar sneezed a magical storm cloud at birth, and it’s followed her around ever since. But when “Stormy” causes one too many public disasters, Rose is taken to Heartstone, an asylum for unstable magic. Its location? The heart of a haunted forest whose trees have mysteriously turned to stone.They say the ghosts are bound to the woods … then why does Rose see them drifting outside the windows at night? And why is there a graveyard on the grounds filled with empty graves? Guided by her future selves via time traveling letters, Rose and Marek—best friend and potential figment of her imagination—must solve the mystery of the specters and the stone trees before the ghosts unleash a legendary enemy that will make their own spooks look like a couple of holey bed sheets and destroy Heartstone Asylum.Letters from the future are piling up. Rose can’t save Heartstone herself. However, five of herselves, a magical storm cloud, and a guardian angel who might very well be imaginary? Now that’s a silver lining. 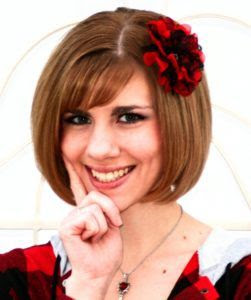 As an author, Kristiana Sfirlea knows what it means to get in character. She spent five years volunteering as a historical reenactor and trying her best not to catch her skirts on fire as a colonial girl from the 1700s (leading cause of death at the time next to childbirth). Working at a haunted house attraction, she played a jumping werewolf statue, a goblin in a two-way mirror, and a wall-scratcher—so if she’s standing very still, growling, checking her reflection, or filing her nails on your wall, be alarmed. Those are hard habits to break.

Kristiana’s speculative flash fiction has been published by Havok, and her debut novel Legend of the Storm Sneezer is a whimsical Middle Grade fantasy involving time travel and things that go bump in the night. She dreams of the day she can run her own mobile bookstore. Or haunted house attraction. Or both. Look out, world—here comes a haunted bookmobile! (And this is precisely why writers should never become Uber drivers.) She loves Jesus, her family, and imaginary life with her characters.

It’s the question on many Christian parents’ minds this time of year. Should my kid see that movie, wear that costume, celebrate that holiday? From tots to teens, most kiddos have an undeniable fascination with Halloween. But should this be encouraged—or cut down quicker than the first victim of a horror flick?

Let me tell you a story. (Don’t worry, it’s not too scary.) Once upon a time, there was a young girl with a monster that followed her wherever she went. It bit at her constantly, venom flooding her veins with anxiety, teeth gnawing her courage to worried nubs. But her monster wasn’t really a monster—it was a debilitating health condition that took the girl’s entire childhood to diagnose.

For years, her fears and pain and panic seemed like her only friends. But then one day, the girl discovered a book series unlike anything she’d ever read before. (And believe me, she’d read a lot.) It was filled with magic and monsters and chilling, thrilling adventures. The heroes faced so many scary things—and putting herself in their shoes, the girl had never felt so understood. Finally, she had friends to take with her to the endless doctor appointments, and somehow holding those books in her hands made her braver.

But in the end—for there is always an end to such things—those books failed her.

They failed her because they didn’t point her to the only true source of bravery: Jesus.

And so, with this in mind, the girl grew up to write a book called Legend of the Storm Sneezer, a story about ghosts and time travel and the true meaning of sacrificial love.

Through the Fire Blogs, October 4

For Him and My Family, October 7

Because I said so — and other adventures in Parenting, October 15 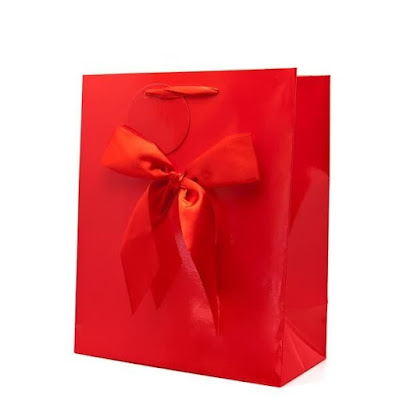 To celebrate her tour, Kristiana is giving away the grand prize package of a signed copy of the book, mini red umbrella, two mini storm-scented candles, a storm sneezer tissue packet, and a button!!

Legend of the Storm Sneezer begins Kristiana Sfirlea’s The Stormwatch Diaries series. It is, also, my first introduction to her work. I adored this book! It was so full of fun and entertainment. It had some quite funny scenes that made me laugh so hard. Rose’s story was a pleasure to read. I did not want to put it down until the very end. It was that good. I am so glad I had the opportunity to read it.

I am giving Legend of the Storm Sneezer a very well deserved five plus stars. I would be interested in reading the next installment from The Stormwatch Diaries when it releases. I recommend this one for readers of all ages, especially young readers. It is one that should not be missed.

I received Legend of the Storm Sneezer from the publisher. This review is one hundred percent my own honest opinion.