This post is part of a virtual book tour organized by Goddess Fish Promotions. Peggy Jaeger will be awarding a $10 Amazon/BN GC to a randomly drawn winner via rafflecopter during the tour. Click on the tour banner to see the other stops on the tour. 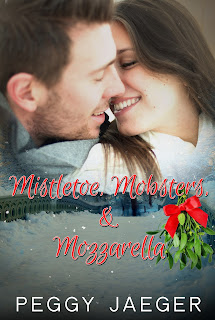 Finding a body in the freezer of the family deli isn’t the way Madonna San Valentino planned to start her day.

Adding insult to injury, the investigating detective is the one guy she’s never been able to forget. After seven minutes of heaven in the back seat of his car when they were teenagers, Tony Roma skipped town without so much as a thanks for the memory.

Just when Madonna thinks the present situation can’t get any worse, Tony is ordered to go undercover at the deli to ferret out a killer. Forced to work together, she vows to keep their relationship cool and professional. But with the sexy, longing looks he tosses her at every turn, Madonna’s resolve is weakening.

With Christmas drawing closer and Tony’s investigation taking an unexpected turn, Madonna is at her wit’s end. Can she really be falling for him again? And will he wind up leaving her broken hearted and alone like the last time?

One look in the den and I felt like history was repeating itself because Giacomo’s twins were face down on the carpet, lying on top of one another, their limbs all twined together, grunting baby noises coming from deep down in their little bodies. Rocco, or maybe Carlo, was on top, unintentionally smothering his brother whose face he was sitting on, smashed flat into the carpet and making breathing impossible.

My brothers, engrossed in the game playing on television, were clueless to the potential disaster right in front of them.

I’d learned long ago yelling at them served no purpose. They were all masters at the art of ignoring me.

I made my way to the babies and, silently, lifted Rocco – or maybe Carlo – off his brother with one hand, the other flipping Carlo – or maybe Rocco – so he was supine. His little face was pale, his lips ringed with blue, but he took a huge breath, startled once, and then let out a bloodcurdling screech sounding remarkably like the wail his father had made back in his own baby days.

All five pair of male eyes turned to me at the sound. Not one of them moved from their comfy positions.

“Marvy,” I mumbled, hoisting a boy onto each hip, one of them silent, the other screaming like he was spewing out a lung or being dismembered. “I’m bringing the boys to their mother,” I said, wincing from the earsplitting shrieking. I wouldn’t be surprised if my left ear went deaf before the night ended.

Giacomo toasted me with his beer and said, “Thanks, sis,” his attention already focused back on the game.

In the kitchen I handed the screaming baby over to his mother and told her how I’d found her sons. It wasn’t my job any longer to discipline or try to guide my brothers. They had wives for that now. And from the look of abject fury on Margaret Rose’s face I knew Giacomo would be getting his comeuppance later on when they were home.

I didn’t feel an iota of pity for him.

With the fratricidal wannabe glued to my hip, I went back to the dining room and finally opened the wine bottle single handedly.

Peggy Jaeger is a contemporary romance writer who writes Romantic Comedies about strong women, the families who support them, and the men who can’t live without them. If she can make you cry on one page and bring you out of tears rolling with laughter the next, she’s done her job as a writer!

Family and food play huge roles in Peggy’s stories because she believes there is nothing that holds a family structure together like sharing a meal…or two…or ten. Dotted with humor and characters that are as real as they are loving, she brings all topics of daily life into her stories: life, death, sibling rivalry, illness and the desire for everyone to find their own happily ever after. Growing up the only child of divorced parents she longed for sisters, brothers and a family that vowed to stick together no matter what came their way. Through her books, she’s created the families she wanted as that lonely child.

When she’s not writing Peggy is usually painting, crafting, scrapbooking or decoupaging old steamer trunks she finds at rummage stores and garage sales.

A lifelong and avid romance reader and writer, Peggy is a member of RWA and her local New Hampshire RWA Chapter.

As a lifelong diarist, she caught the blogging bug early on, and you can visit her at peggyjaeger.com where she blogs daily about life, writing, and stuff that makes her go "What??!"

You’re scheduled to participate in this tour – the scheduled stops are listed below.  We ask that all posts go up NO LATER THAN 4 a.m. eastern time (earlier is fine) and that comment moderation is disabled (or that you are readily available all day to approve comments in a timely fashion.  If you haven’t received your information for the stop for which you are scheduled, please email us immediately and let us know.