Grand Finale and Giveaway: Rescued by the Firefighter by Catherine Lanigan 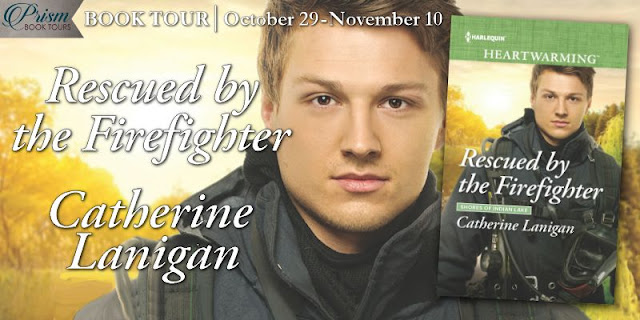 Welcome back to Shores of Indian Lake series! For those of you who haven’t visited my series yet or known my characters, I think you’ll love this story of Beatrice Wilcox and Rand Nelson equally as all the other Heartwarming people of Indian Lake...

But running this camp was her dream. She wanted to create a summer idyll for kids who faced challenges in their young lives, as she had when she’d been a camper herself as a child.

When I think of forest fires, I remember living in Los Angeles, California for over a decade and how so many of our decisions were based on the constant of fires.

We lived on the world’s tiniest houseboat in Marina Del Rey ON the water and far from anything resembling a forest. Yet,my husband’s elderly aunt and uncle lived in Novato, on top of a mountain surrounded by nothing but forest...

"Don’t worry if you have not yet read Lanigan’s other Shores of Indian Lake books. Rescued by the Firefighter can easily be read and enjoyed as a standalone. So, if you are in need of a sweet contemporary romance, make sure to check this one out—I recommend it."

Cindy came rushing up with five-year-old Ricky Sanders, the youngest child at the camp that week. He was a foster child, hoping to be legally adopted by his new foster parents, and was Cindy’s personal favorite. “Did one of you get the Dunning boys?”

“Eli and Chris are in the last cabin,” Beatrice replied. “I thought you were getting them.”

“I was…” Cindy hesitated, looking at Ricky. She put Ricky in his child’s seat and belted him in. She turned away from the boy so that only Beatrice could hear her. Nearly in a whisper Cindy said, “They weren’t there. That’s why I thought one of you might have gotten to them already.”

RAND NELSON PULLED his fire engine to a stop in front of the camp and stared over the steering wheel in disbelief at what he was seeing: a woman running toward the fire.

He jumped out the driver’s door, his heavy leather-booted feet hitting the ground with a thud. He grabbed his thermoplastic helmet off the console, then his goggles and pigskin gloves.


My Life Loves and Passion - Excerpt

Rand had fought fires from the Upper Peninsula of Michigan to Idaho to California. He knew exactly the kind of conditions that it took for Mother Nature to burn. But there had been no thunderstorms here in Indian Lake. No lightning bolts. And not quite enough heat to spark spontaneous combustion. No, this was a fire started by human hands. Rand would bet his reputation on it.

And if he was right, Chris had all the more reason to stay clear.

Rand had one shot at bringing out Chris. He had to take it.

Rand kept going, toward the most burned section of forest. It was his guess that it had been near here where the fire started.

"Such a touching story! With a return visit to Shores of Indian Lake, we see lots of the old regulars and meet some news ones as we embark on a heartwarming story of hope. . . . overall a really sweet story of love when you least expect it and reaching for it even when it’s outside of your comfort zone. Sweet kids, a sexy fireman and a story about reaching for the stars and achieving them!"

"From the start I knew that I was going to enjoy these two characters. A caregiver and a firefighter, two people you want to live happily ever after. . . . The ending definitely made me teary eyed, and I can not wait to read more from this author. I would love to read up and see how these characters are doing. Especially the kids and the camp. I am giving this book a 5/5."

"Author, Catherine Lanigan, successfully weaves enticing romance into her otherwise, suspense gram stories. . . . it has enough intrigue and writing which keeps it interesting, that the reader still will not want to put it down. The research she did on the subject matters covered in this tale was remarkable."

Seriously, when you see all this gear these guys and gals have strapped to their backs and that they carry INTO a fire, all I can think is how strong they have to be to perform their job.

In RESCUED BY THE FIREFIGHTER, Rand Nelson saves Beatrice Wilcox and little Eli Dunning from the raging forest fire. He carries Beatrice and Eli at the same time out of the fire...

"A sweet story that fits in perfectly with the Indian Lake universe, Rescued by the Firefighter reminds us of the power of love to heal even the deepest wounds. Layered characters that are genuinely likable, a charming setting, and great romantic tension – all of these elements make this a great choice for a cozy weekend read!"

Wincing, she glanced up and saw him.

He was leaning against the doorjamb. Gone were the Nomex suit, goggles and gloves. The helmet. She noticed his thick, dark, nearly black hair first. A hunk of shining, slightly damp hair hung over his strong forehead. His jawline looked like it had been carved from granite. In fact, everything about him was strong. He didn’t need a firefighter’s suit to make his shoulders wide; his presence filled the doorway, the room, the expanse between them. He wore a black short-sleeved T-shirt that stretched over biceps that could only have been built by hours in a gym. His black jeans fitted close to his narrow hips and muscular thighs. He wore no jewelry. No watch, no wedding ring, no tats. There was nothing extraneous or ornamental about this man. It wasn’t necessary—his whole being shouted, “I’m a man.”

He pushed himself off the door and took a short step inside. “You okay?”

"This novel is full of a cast of characters that readers are sure to enjoy, from the adults and their sweet romance to the children and their fun inclusion in the book. This is a touching and heart-warming sweet contemporary romance that lovers of the Harlequin Heartwarming line are sure to enjoy!"

"I liked how the layers were set early-on, how Lanigan gives you a glimpse of where she wants this story to go direction wise but holds back some of the key bits as well. She wants you to wait it out and see how it unfolds - taking it gently and allowing you to understand her characters without prejudgement."

Although it's romantic and fun to conjure visions of me interviewing a crew of firefighters about their emotions and dealings in relationships, that was not quite the case. I did talk to both husbands and wives who deal with the stress of one or both being employed in high risk fields but to be honest, their attitude was "everything in life is high risk"...


Among the Reads - Review

"This is a fun, sweet story. Though there is a dramatic rescue at the onset, it is not a suspenseful or action-filled story, it is more about the relationship between the main characters."

"Do yourself a favor and read this series and particularly this book. It has heart, some serious issues that need to be dealt with but overall, I sniffled, sighed and I’m thinking about Rand and Bea. That’s great storytelling."

"For readers who have been following Catherine Lanigan’s Shores of Indian Lake series, there are plenty of familiar faces (names?) within the pages of Rescued by the Firefighter. And for those who have missed the previous books, this may just be the best time to jump into them because Beatrice and Rand are brand new characters who (at least to my knowledge. But full disclosure: I have read most but not every book in the series) haven’t been introduced before."

“I’ll walk you to your truck,” she said and turned to grab her crutches from the porch railing.

He decided he didn’t want their time together to end, so he stood at the bottom step as she followed him down. “You’re getting pretty good with those things.”

“I’m trying,” she said and walked alongside him to his truck.

"Rescued by the Firefighter by Catherine Lanigan is a great read. This book is a welcoming visit back to Shores of Indian Lake. . . . I enjoyed this exciting heartwarming romance." 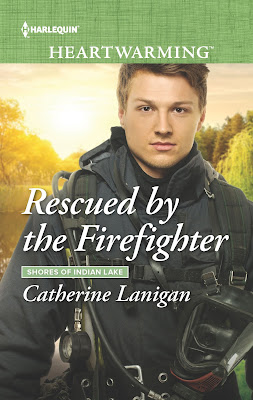 He saved her life…

But will he destroy her dreams?

Firefighter Rand Nelson is tall and handsome and has literally walked through an inferno for Beatrice Wilcox. He’s a hero…and that’s exactly the problem. Beatrice knows all too well the risks of loving a man with a dangerous career. But when Rand’s report threatens her beloved children’s camp, Beatrice can’t refuse his offer of help…even though she knows they’re both playing with fire. 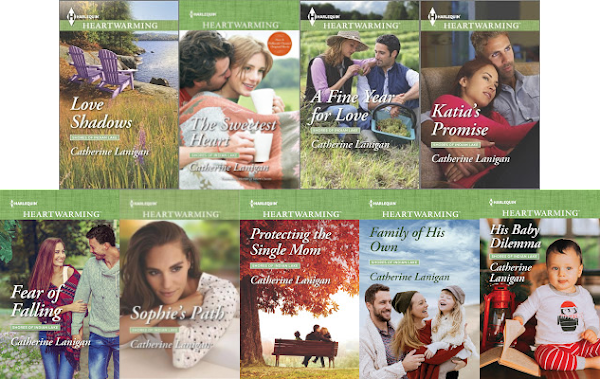 Catherine Lanigan is the international bestselling and award-winning author of over forty-five published titles in both fiction and non-fiction, including the novelizations of Romancing the Stone and The Jewel of the Nile. Ms. Lanigan’s novels have been translated into over twenty-four languages. Lanigan was tasked by the NotMYkid foundation to pen a collection of compelling and informative true stories of teen addicts. Ms. Lanigan’s SHORES OF INDIAN LAKE series for HARLEQUIN HEARTWARMING includes LOVE SHADOWS, HEART’S DESIRE , A FINE YEAR FOR LOVE, KATIA’S PROMISE, FEAR OF FALLING, SOPHIE’S PATH, PROTECTING THE SINGLE MOM, FAMILY OF HIS OWN, HIS BABY DILEMMA, RESCUED BY THE FIREFIGHTER and MY RACING HEART (2019).

Ms. Lanigan is a frequent speaker at literary functions and book conventions as well as inspiring audiences with her real stories of angelic intervention from her Angel Tales series of books. She is an outspoken advocate for domestic violence and abuse and was honored by The National Domestic Violence Hotline in Washington, D.C. She has been a guest on numerous radio programs including “Coast to Coast” and on television interview and talk show programs as well as blogs, podcasts and online radio interview programs. She writes a monthly blog for Heartwarmingauthors.blogspot.com. 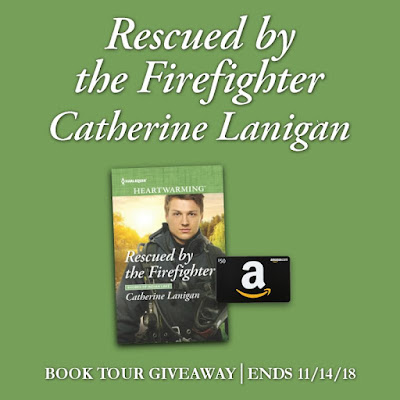