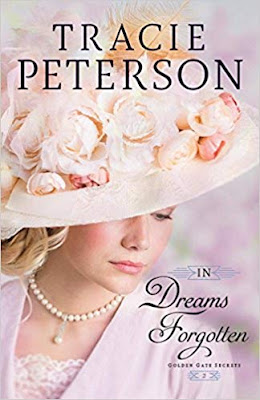 Judith Gladstone came to San Francisco after her parents died to find her last living relative, an aunt she has never met. Instead she has fallen head over heels in love with Caleb Coulter, her friend's brother. Caleb has promised to help Judith find her aunt, but she can tell he thinks of her only as a friend, and she struggles to hide her feelings.When Caleb traces Judith's aunt to the wealthy Whitley family, Judith is reunited with her long-lost relatives. The truths she learns about her past and her parents are shocking and overwhelming, however, and the more she gets to know her new family, the more danger she uncovers. Someone does not want Judith in the picture, and they will do whatever it takes to get rid of her.

In Dreams Forgotten is the second installment from Tracie Peterson’s series, Golden Gate Secrets. I thought this book was a great read. I enjoyed the sweet, clean romance with the little mystery and suspense. I, also, enjoyed learning history about San Francisco, California.

I give In Dreams Forgotten four and a half stars. I look forward to continuing the Golden Gate Secrets series.

I highly recommend for readers who love to read a hard to put down historical.