Life Without Shoes
by Emma Cyrus 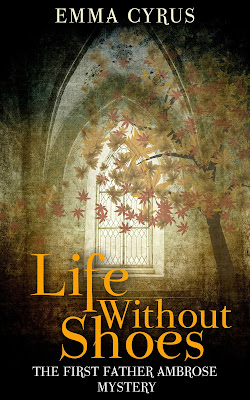 In the great tradition of The Name of the Rose, the Brother Cadfael mysteries and Grantchester, Life Without Shoes confronts a modern-day monastic with a horrifying crime.

Father Ambrose has found a simple life leading a spiritual community in Northern California. He spends his days on guiding the farming and teaching meditation. Then, someone dumps a body in one of their orchards.

Now, the violence of the modern world has come crashing through the gates. He wants Sheriff Charlie Cormley to believe the body has nothing to do with them, but it’s not that easy. He must take on the role of sleuth to protect his community and find the truth. He finds himself moving out into the world in ways he never imagined, and life at New Life will never be the same.
~~~~~~~~~~~~~

She slipped the paper out of the sleeve and looked with amusement at the cover story: “Exclusive: Interview with Father Ambrose at New Life!” Under the headline was a large photo of Ambrose sitting at his desk, smiling at the camera. The text started below, continuing to page two.

“No, I signed off on it last night. I’ll look at it later. If it’s different from what I approved, that’s likely to ruin my day, so I’ll just postpone it awhile. He’s got this thing about picturing me heroically. I can’t fault his logic from a journalistic standpoint, but it’s very uncomfortable for me. I just hope New Life benefits from all the attention.”

“If the only one who doesn’t see you as a hero is you, we’ll be fine. Like you said, we’re faced with an opportunity. You might not like it, but this is the way it’s playing itself out. We don’t want reporters accosting our folks at the Farmers’ Market or banging down the gate here, so we have to give them a story that satisfies their readers. Just remember, you can create pretty much any picture you want to. Let’s tell our story by telling stories about you!”

Ambrose groaned. “I don’t want to be famous! I just want a nice, quiet harvest with good sales, no drama, no bodies in bags, no policemen.”

“We’re a little beyond that, don’t you think? I don’t usually say things like ‘suck it up,’ but that’s what I mean. We all need you to do this, and we appreciate that you have the capacity.”

Emma was born in West Virginia and lived there until she was in high school, when her family moved to Pittsburgh. After high school, she went to Boston to go to college. She worked in different small and startup businesses until she moved into a yoga community in Pennsylvania. There, she’s worked on various projects and taught yoga.

She started the Father Ambrose series as a way of pulling together her love of good mystery stories with her deepening appreciation of the real-life magic and mystery of inner work. Father Ambrose has many characteristics in common with the leaders of her community, but his voice is probably hers, or at least what she thinks her voice would be, if she were living inside the parameters of his life.

She’s discovering the compelling nature of writing fiction and the surprises of working with what other writers have called their ‘muse.’ The creative process seems to have its own timetable and logic. The best results seem to come from stilling her own personal voice and allowing that ‘muse’ to speak.

Emma Cyrus will be awarding a $25 Amazon/BN GC to a randomly drawn winner via rafflecopter during the tour.

Life Without Shoes begins a whole new and exciting series by Emma Cyrus, Father Ambrose. I thought it was pretty good. It did get a little slow about fifty percent through but it quickly picked back up. I enjoyed the mystery and suspense that kept me intrigued and wondered how it all was going to end.

I am giving Life Without Shoes four stars. I look forward to the following installment from the Father Ambrose series. I would to find out what happens next.