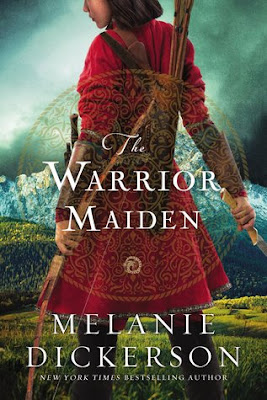 The Warrior Maiden by Melanie Dickerson
My rating: 5 of 5 stars

Mulan isn’t afraid to pretend to be a son and assume her father’s soldier duties in war. But what happens when the handsome son of a duke discovers her secret?Mulan is trying to resign herself to marrying the village butcher for the good of her family, but her adventurous spirit just can’t stand the thought. At the last minute, she pretends to be the son her father never had, assumes his duties as a soldier, and rides off to join the fight to protect the castle of her liege lord’s ally from the besieging Teutonic Knights.Wolfgang and his brother Steffan leave Hagenheim with several other soldiers to help their father’s ally in Poland. When they arrive, Wolfgang is exasperated by the young soldier Mikolai who seems to either always be one step away from disaster... or showing Wolfgang up in embarrassing ways.When Wolfgang discovers his former rival and reluctant friend Mikolai is actually a girl, he is determined to protect her. But battle is a dangerous place where anything can happen — and usually does.When Mulan receives word that her mother has been accused of practicing witchcraft through her healing herbs and skills, Mulan’s only thought is of defending her. Will she be able to trust Wolfgang to help? Or will sacrificing her own life be the only way to save her mother?


The Warrior Maiden is book nine from Melanie Dickerson’s series, Hagenheim. In this installment, a reader gets a retelling of the fairy tale of Mulan. I thought this was a fun and unique retelling of a tale that I do not normally see being retold. I thought Mulan’s story was great.

I give The Warrior Maiden five plus stars. It is definitely my favorite of the series that I have read. I highly recommend it.

View all my reviews