Blog Tour and Giveaway: The Curse of the Mummy: Uncovering Tutankhamun's Tomb by Candace Fleming

I am thrilled to be hosting a spot on the THE CURSE OF THE MUMMY: Uncovering Tutankhamun's Tomb  by Candace Fleming Blog Tour hosted by Rockstar Book Tours. Check out my post and make sure to enter the giveaway! 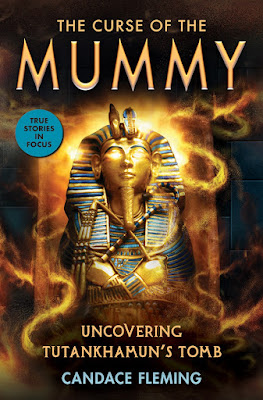 Title: THE CURSE OF THE MUMMY: Uncovering Tutankhamun's Tomb

Award-winning and critically acclaimed author Candace Fleming presents the edge-of-your-seat true story of the search for Tutankhamun's tomb, the Western public's belief that the dig was cursed, and the battle for ownership of the treasures within.

During the reign of the New Kingdom of Egypt, the boy pharaoh Tutankhamun ruled and died tragically young. In order to send him on his way into the afterlife, his tomb was filled with every treasure he would need after death. And then, it was lost to time, buried in the sands of the Valley of the Kings.

His tomb was also said to be cursed.

Centuries later, as Egypt-mania gripped Europe, two Brits -- a rich earl with a habit for gambling and a disreputable, determined archeologist -- worked for years to rediscover and open Tutankhamun's tomb. But once it was uncovered, would ancient powers take their revenge for disturbing and even looting the pharaoh's resting place? What else could explain the mysterious illnesses, accidents, and deaths that began once it was found?

I enjoyed reading The Curse of the Mummy: Uncovering Tutankhamun's Tomb with my nine year old son, who is fascinated with Egyptian History. Photographs are included throughout the book that gave us a chance to discuss what we just read. It was a great way learning something new for the both of us and spending some quality time together while doing it.

I will be giving The Curse of the Mummy: Uncovering Tutankhamun's Tomb a very well deserved five plus stars. I highly recommend it for readers who are between the ages of seven and twelve. It would make a great addition to a school library or school classroom.

I received a paperback copy of The Curse of the Mummy: Uncovering Tutankhamun's Tomb from the publisher, but was not required to write a positive review. This review is one hundred percent my own honest opinion. 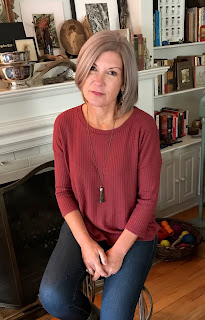 Candace Fleming awarded herself the Newbery Medal in fifth grade after scraping the gold sticker off the class copy of The Witch of Blackbird Pond and pasting it onto her first novel—a ten-page, ten-chapter mystery called Who Done It? She’s been collecting awards (her own, not Elizabeth George Speare’s) ever since.

Today, Candace is the versatile and acclaimed author of more than forty books for children and young adults, including the Los Angeles Times Book Prize honored The Family Romanov: Murder, Rebellion, and the Fall of the Russian Empire; Boston Globe/Horn Book Award-winning biography, The Lincolns; the bestselling picture book, Muncha! Muncha! Muncha!; the Sibert-Award-winning Giant Squid; and the beloved Boxes for Katje. She contributed the chapter on Katharine of Aragon to Fatal Throne. Photo credit: Michael Lionstar.

3 winners will win a finished copy of THE CURSE OF THE MUMMY, US Only.