Review: Why We Fought: Inspiring Stories of Resisting Hitler and Defending Freedom by Jerry Borrowman 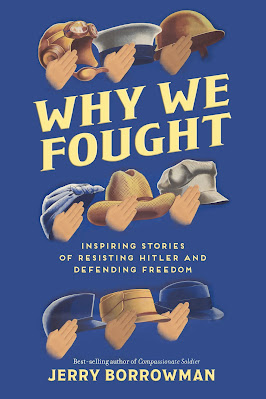 Why We Fought:
Inspiring Stories of Resisting Hitler and Defending Freedom
by Jerry Borrowman
My rating: 5 of 5 stars
Blurb:
The struggle to combat the Nazis during World War II encompassed front lines far beyond conventional battlefields. In a panoramic and compelling account, author Jerry Borrowman shares seven largely untold stories of people who undertook extraordinary efforts to defeat the Third Reich at enormous personal risk.

Some were soldiers like the Ghost Army, an eclectic group of former artists, actors, and engineers who engaged in top-secret tactical deceptions by staging ingenious decoy armies. Using inflatable tanks, radio transmissions, and sound effects, they were able to trick the Germans throughout the course of the war, often working close to the front lines of the fiercest fighting.

Some were ordinary citizens like William Sebold, a German immigrant and US citizen, who could have been a deadly foe, but instead chose the Allied cause. When he was coerced by the Gestapo into becoming a spy in America, he instead approached the FBI and offered to become a double agent. His efforts successfully helped bring down a dangerous German spy network that was dedicated to stealing industrial and wartime secrets and sabotaging America on home soil.

These dramatic and inspiring personal stories shed light on some of the darkest days of World War II and one of the most perilous times in human history. As the Nazis swept through Europe, citizens around the world faced an individual and national complex moral question: How do you respond to the tyranny and bloodthirsty madness of the Nazis? These are stories of ordinary men and women who would not surrender or compromise. They resisted and fought with total commitment for freedom and democracy despite the personal cost.
My Review:
I thought Why We Fought: Inspiring Stories of Resisting Hitler and Defending Freedom was a great read. I admired learning about the brave souls who took a stand against the Third Reich. I was amazed at their courage and was inspired about reading about them. This is one those books that needs to be read over and over again.

I am giving Why We Fought: Inspiring Stories of Resisting Hitler and Defending Freedom a very well deserved five plus stars. I highly recommend it for readers who enjoy reading about History, especially those centered around the World War II era. I would love to read more like this by Jerry Borrowman in the future.

I received a paperback copy of Why We Fought: Inspiring Stories of Resisting Hitler and Defending Freedom from the publisher, but was not required to write a positive review. This review is one hundred percent my own honest opinion.