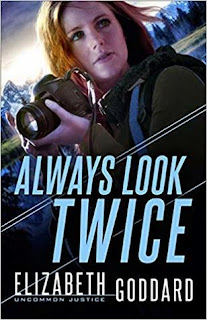 Always Look Twice by Elizabeth Goddard
My rating: 4 of 5 stars

While photographing the Grand Tetons, Harper Reynolds unwittingly captures a murder on film. But when she loses the camera fleeing the scene, can she and rancher Heath McKade find the camera and solve the murder before the killer makes her his next victim?

Always Look Twice is book two from Elizabeth Goddard’s Uncommon Justice series. I enjoyed the first book, Never Let Go, and this one does not disappoint. Even though they are part of a series, they can be read as a stand-alone. But I do recommend reading them both. I loved Heath and Harper teaming up in this one. They are involved in quite the adventure. I could not have predicted what was going to happen next.

I am giving Always Look Twice four and a half stars. I look forward to the third installment from the series, Don’t Keep Silent.

View all my reviews

Posted by Amybooksy at 1:30 AM