Blog Tour and Giveaway: A Sickness in the Soul by William Savage

A Sickness in the Soul: An Ashmole Foxe Georgian Mystery
by William Savage 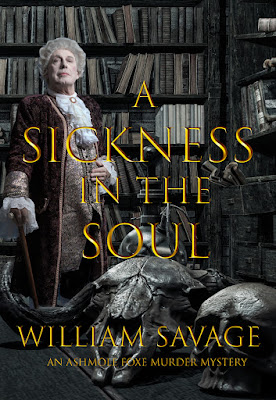 “Many people wear masks. Some to hide their feelings; some to conceal their identity; and some to hide that most hideous plague of mankind: a sickness in the soul.”

Ashmole Foxe, Norwich bookseller, man-about-town and solver of mysteries will encounter all of these in this tangled drama of hatred, obsession and redemption.

This is a story set in the England of the 1760s, a time of rigid class distinctions, where the rich idle their days away in magnificent mansions, while hungry children beg, steal and prostitute themselves on the streets. An era on the cusp of revolution in America and France; a land where outward wealth and display hide simmering political and social tensions; a country which had faced intermittent war for the past fifty years and would need to survive a series of world-wide conflicts in the fifty years ahead.

Faced with no less than three murders, occurring from the aristocracy to the seeming senseless professional assassination of a homeless vagrant, Ashmole Foxe must call on all his skill and intelligence to uncover the sickness which appears to be infecting his city’s very soul.

Can Foxe uncover the truth which lies behind a series of baffling deaths, from an aristocrat attending a ball to a vagrant murdered where he slept in a filthy back-alley?

All might have continued on its stable course had not a day arrived when a stranger came to the house. Earlier that morning, Dr Danson informed Archibald Gunton, the butler, to his considerable surprise, that he was expecting a visitor. When he arrived, the butler was told, he must be admitted immediately and without question. He would await the man in his library.

The man came and spent barely twenty minutes with Dr Danson. No one saw or heard him leave. It was not until the butler entered the library about an hour later that he found the reason. His master lay slumped back in his chair, his mouth and eyes wide open. On his face, there was an expression that the butler later described to his mistress as being ‘as if he had looked into hell itself’. At his feet were his wig and a small dagger; the one which he usually kept on his desk. There was blood on the left side of his chest. It was obvious at once that the Reverend Dr Jonathon Danson, scholar of the occult and seeker after hidden knowledge, was dead.

As the news spread in the neighbourhood, two schools of opinion formed. The majority, considering Dr Danson’s circumstances, announced that it was plainly a domestic crime. An elderly rich husband takes a pretty, young wife, who was penniless before he married her. ‘Murder!’ they whispered amongst themselves. ‘Stands to reason, don’t it?’ A sizeable number reached a different conclusion; one based on rumours of the man’s strange interests. ‘Witchcraft!’ they muttered, or ‘devilry!’ Either way, that group were certain the powers of evil had come to claim one of their own. 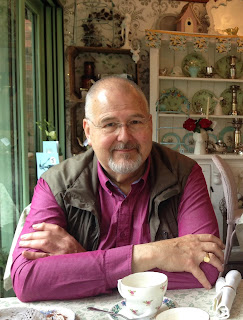 I started to write fiction as a way of keeping my mind active in retirement. Throughout my life, I have read and enjoyed hundreds of detective stories and mystery novels. One of my other loves is history, so it seemed natural to put the two together. Thus began two series of murder mystery books set in Norfolk, England.

All my books are set between 1760 and around 1800, a period of turmoil in Britain, with constant wars, revolutions in America and France and finally the titanic, 22-year struggle with Napoleon.
The Ashmole Foxe series takes place at the start of this time and is located in Norwich. Mr Foxe is a dandy, a bookseller and, unknown to most around him, the mayor’s immediate choice to deal with anything likely to upset the peace or economic security of the city.
The series featuring Dr Adam Bascom, a young gentleman physician caught up in the beginning of the Napoleonic wars, takes place in a variety of locations near the North Norfolk coast. Adam builds a successful medical practice, but his insatiable curiosity and  knack for unravelling intrigue constantly involve him in mysteries large and small.
I have spent a good deal of my life travelling in Britain and overseas. Now I am more than content to write stories and run a blog devoted to the world of Georgian England, which you can find at http://www.penandpension.com. You can also follow me on Twitter as @penandpension.

The Fabric of Murder http://relinks.me/B00W3SDJW8

This Parody of Death http://relinks.me/B06XDNY81B

Bad Blood Will Out http://relinks.me/B079RCVQ4X

A Sickness in the Soul https://www.amazon.com/dp/B07WF3Y4VJ

The Code for Killing http://relinks.me/B01A2BY1LU

A Tincture of Secrets and Lies http://relinks.me/B075LM2TZP

Death of a Good Samaritan https://relinks.me/B07NLCGK2Y


Why do I choose to set my books in Georgian England?
Criminal detection today involves a great deal of scientific and legal complexity. There are complex rules to be followed by every investigator to safeguard the accused and prevent miscarriages of justice. Forensic science also plays a major role in a good many prosecution or defence cases. Since I know nothing of either of these matters, writing something credible would demand considerable research beforehand in areas in which I have little interest. Sir Arthur Conan-Doyle’s Sherlock Holmes claimed amazing forensic skills, but you could never get away today by giving your protagonists abilities which owe everything to fantasy and little or nothing to genuine science. I want to write stories in which the process of detection owes everything to human intelligence and insight, so I must either return to a past when nothing else was available, or write sci-fi fantasy, for which I have no taste whatsoever.
Why 18th-century England? For a start, I do not feel I know enough of day-to-day life in any other place and time period to write convincingly. I also now live in what still looks like a Georgian town, surrounded by the grand mansions of 18th-century statesmen and landowners. It’s all right here, within walking distance. How could I write about any other period?
Understanding Georgian England
Georgian England was a paradox. On the surface, it was a time of rationalism and scientific endeavour, coupled with rising wealth, sophistication and elegance amongst the middle and upper classes. It was also a land where outward wealth and display hid simmering political and social tensions. The country had faced intermittent wars with several continental countries for the past fifty years and would need to survive a further series of world-wide conflicts in the fifty years ahead. It was an era which would see revolutions in America and France, with monarchies overthrown and the whole style of government changed for ever. England’s civil war had come a hundred years earlier, but the echoes of that conflict, and the ideas it had set loose, were still almost as powerful as they had ever been.
The upper and middle classes were enjoying rising living standards, access to the wealth of India and the marvels from China, and scientific and technological progress at a rate not seen before in a thousand years. Yet for the poor, life had scarcely changed since mediaeval times. They still lived in squalor; their outlook a mixture of traditional notions mixed with superstition and the desperation to survive by any means they could — and that included crime, vice and a sharp-witted opportunism that might sometimes include both.
Ashmole Foxe, Bookseller, Dandy and Investigator
Into this rich mix of influences comes a series of murders in Norwich, which was still the second or third largest city in England at the time. “A Sickness in the Soul” is set in the 1760s; a time of rigid class distinctions, where the rich idle their days away in magnificent mansions, while hungry children beg, steal and prostitute themselves on the streets. A time when rich merchants rival the gentry in the accumulation and display of wealth, while poor artisans struggle to survive and the rural are losing their employment and their meagre landholdings to the vast change in land ownership known as the Enclosure Movement. In place of a few acres to grow food and keep their animals, the rural poor were now forced to take whatever work they could, which usually meant seasonal labour for a pittance and the chance to starve when winter came. Many flocked to the towns, hoping to find employment in the new factories and mills. If they succeeded, they found the hours long, the work dangerous and the pay barely sufficient to live on.
England’s wealth from overseas trade benefited the few and brought misery to the many, as cheap food and goods from overseas drove down domestic prices. I have chosen to set Ashmole Foxe in perhaps the most ambiguous position I could find. On the one hand, he is a mere tradesman and not even one of the merchant barons who ran Norwich. On the other, he is a rich man, with abundant time and resources which allow him to indulge in whatever takes his fancy. He is a dandy, a womaniser and at the same time a secret philanthropist on a considerable scale. His eagerness to bed any pretty woman who seems willing would be roundly condemned by many today; yet his treatment of all the women he encounters displays a sensitivity and empathy that would have been almost angelic at the time and is still rare in our world today.
Ashmole Foxe is a bundle of contradictions, wrapped up in the most elegant styles of a time when to be a gentleman demanded a level of sophistication, education and politeness of manner that has never been approached, let alone exceeded, at any time since. In many ways, Ashmole Foxe is the 18th century: gracious, elegant and cultured, while also capable of behaving in ways that would make many a strict moralist suffer indigestion for a year!

The Ashmole Foxe Mysteries in order

One randomly chosen winner via rafflecopter will win a $50 Amazon/BN.com gift card.
a Rafflecopter giveaway