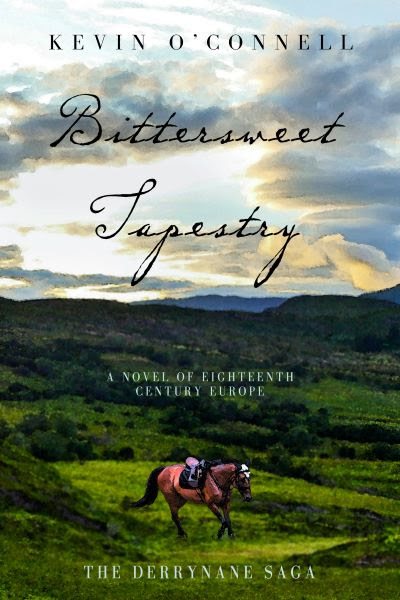 A dramatic decade has passed since sixteen-year-old Eileen O’Connell first departed her family’s sanctuary at remote Derrynane on the Kerry coast to become the wife of one of the wealthiest men in Ireland and the mistress of John O’Connor’s Ballyhar – only to have her elderly husband die within months of the marriage. Unhappily returned to Derrynane, within a year, under the auspices of their uncle, a general in the armies of Maria Theresa, Eileen and her sister, Abigail departed for Vienna and a life neither could have ever imagined – one at the dizzying heights of the Hapsburg empire and court, where Abigail ultimately became principal lady-in-waiting to the Empress herself, whilst Eileen, for nine momentous years, served as governess to the Empress’s youngest daughter – during which time Maria Antonia, whom Eileen still calls ‘my wee little archduchess’, has become Marie Antoinette, dauphine of France, though she continues to refer to her beloved governess as “Mama”. As Bittersweet Tapestry opens, it is the High Summer of 1770. Having escorted the future Queen of France from Vienna to her new life, Eileen and her husband, Captain Arthur O’Leary of the Hungarian Hussars, along with their little boy and Eileen’s treasured friend (and former servant) Anna Pfeffer are establishing themselves in Ireland. Their ties to Catholic Europe remain close and strong; in addition to Abigail and her O’Sullivan family and General O’Connell, his wife and young daughter in Vienna, their brother Daniel is an officer in the Irish Brigade of the armies of Louis XV, whilst their youngest brother, Hugh, is studying at École Militaire in Paris, his path to a commission in the Dillons’ Regiment of the Brigade. His gentle Austrian friendship with Maria Antonia having inevitably waned, Hugh’s relationship with the strikingly-beautiful young widowed Princess Marie Thérèse Louise of Savoy is blossoming. Though happily ensconced at Rathleigh House, the O’Leary family estate in County Cork, being prominent amongst those families which are the remnants of the old Gaelic order in the area, Eileen and Art find that the dark cloud of the Protestant Ascendancy hovers heavily, at times threateningly, over them. Bittersweet Tapestry is a tale of stark contrasts – between Hugh’s life of increasing prominence amidst the glitter and intrigue of the French court and Art and Eileen’s in English-occupied Ireland – especially as the latter progresses into a dark, violent and bloody tale . . . ultimately involving an epic tragedy, which along with the events leading up to it and those occurring in its dramatic wake, will permanently impact the O’Learys, the O’Connells – and their far-flung circle of family and friends in Ireland and across Europe. With his uniquely-descriptive prose, Kevin O'Connell again deftly weaves threads of historical fact and fancy to create a colourful fabric affording unique insights into the courts of eighteenth-century Catholic Europe as well as English-ruled Ireland. As the classic story unfolds amongst the O’Learys, the O'Connells, their friends and enemies, the tumultuously-dangerous worlds in which they dwell will continue to gradually – but inexorably – become even more so. Bittersweet Tapestry joins O’Connell’s well-received Beyond Derrynane and Two Journeys Home as The Derrynane Saga continues – an enthralling epic, presenting a sweeping chronicle, set against the larger drama of Europe in the early stages of significant – and, in the case of France – violent change. 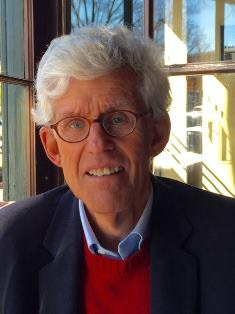 Kevin O'Connell is a native of New York City and a descendant of a young officer of what had—from 1690 to 1792—been the Irish Brigade of the French army, believed to have arrived in French Canada following the execution of Queen Marie Antoinette in October of 1793. At least one grandson subsequently returned to Ireland and Mr. O'Connell's own grandparents came to New York in the early twentieth century. He holds both Irish and American citizenship. He is a graduate of Providence College and Georgetown University Law Centre. For much of his four decades-long legal career, O'Connell has practiced international business transactional law, primarily involving direct-investment matters, throughout Asia (principally China), Europe, and the Middle East. The father of five children and grandfather of ten, he and his wife, Laurette, live with their golden retriever, Katie, near Annapolis, Maryland. 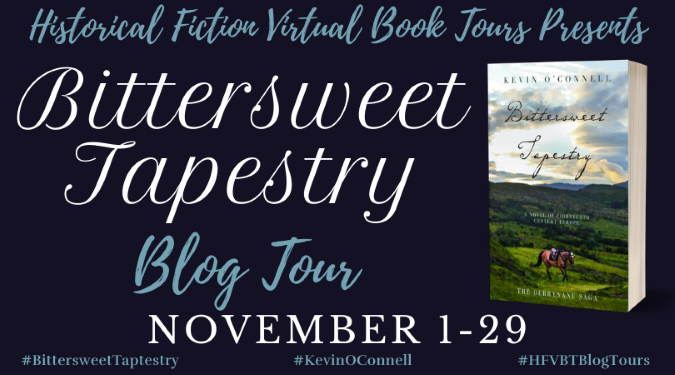 Bittersweet Tapestry: A Novel of Eighteenth Century Europe is the third installment from Kevin O’Connell fabulous The Derrynane Saga. I recommend this series to be read in order, readers would not be disappointed! I enjoyed catching up with Eileen O’Connell ten years later.  The story is set in the eighteenth century. I loved the author’s details of the time. I felt like I was right there living among the people and experiencing what they are.

Bittersweet Tapestry: A Novel of Eighteenth Century Europe gets four and a half stars from me. I would love to read more of this series in the near future.