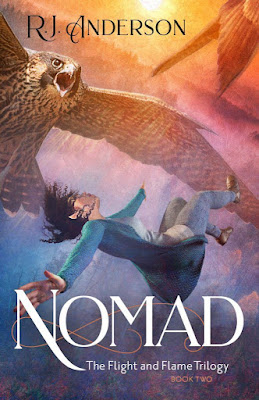 Cast into exile, she must return to free her people.

Banished from her underground home by Betony, the queen of the Cornish piskeys, young Ivy sets out to forge a new life for herself in the world above. But a deadly threat lingers in the mine, and Ivy cannot bear to see her people suffer while Betony refuses to believe. Somehow she must convince the queen to let them go.

Her mission only becomes more complicated when Ivy starts to dream of the ancient battles between her ancestors and the spriggan folk. Who is the strange boy in her visions? Could her glimpses of his past help Ivy find a new home for her fellow piskeys?

To find the answers, Ivy must outfly vicious predators, outwit cunning enemies, and overcome her own greatest fears. And when evil threatens the people Ivy loves best, it will take all her courage, faith, and determination to save them. 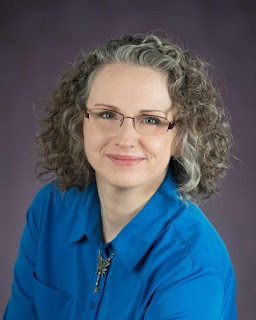 Born in Uganda to missionary parents, R. J. (Rebecca Joan) Anderson is a women’s Bible teacher, a wife and mother of three, and a bestselling fantasy author for older children and teens. Her debut novel Knife has sold more than 120,000 copies worldwide, while her other books have been shortlisted for the Nebula Award, the Christy Award, and the Sunburst Award for Excellence in Canadian Science Fiction. Rebecca lives with her family in Stratford, Ontario, Canada.

Fear of change. Fear of an unknown future. Fear of failure, loss or regret. What fears keep you from doing what you know you should do, or being the person you ought to be?
In Nomad, the second book of the Flight and Flame trilogy, my heroine Ivy is forced to make a new life for herself after being exiled by Betony, her people’s proud and stubborn queen. Though all Ivy ever wanted was to help her people, Betony refuses to believe that the piskeys of the Delve are in danger — because to do so would mean not only questioning her own beliefs and prejudices, it would force her people to change their entire way of life.
But though Ivy is brave enough to stand up for the truth and even adapt to the strange new world she’s thrust into, she has her own fears to overcome in the course of this story. Fear of vulnerability, of unworthiness, and of making mistakes hold Ivy back as she struggles to find a way to save her friends and family. She’s only one young woman, with few allies and very little power. How can she make a difference?
Just as Moses begged God not to send him to confront Pharaoh and free the Israelites because he didn’t think he was eloquent or impressive enough, Ivy finds it hard to believe her fellow piskeys will ever listen to or believe her. The hard lesson she has to learn is that courage doesn’t come from being tough and self-confident, it comes from caring about something bigger than yourself. Not until the people she loves most are in danger does Ivy cast off her fears and take the bold steps needed to save them — but by then it may be too late.
It’s easy to get trapped by our own uncertainties and insecurities, and let fear rule our actions. Only when we take our eyes off our own frailty and act out of faith in God and love for others can we become all we were meant and made to be… and the longer we delay, the more others may suffer for it. Can we pray together for strength to start doing what’s right in our homes, our neighbourhoods and our churches, no matter how unqualified we feel to do it?
Nomad is the second step of Ivy’s journey to save her fellow piskeys and find her true calling. If you’ve enjoyed Swift and this novel, you can look forward to the final book Torch in February 2021!
— R.J. Anderson

Through the Fire Blogs, January 8

Because I said so — and other adventures in Parenting, January 9

For the Love of Literature, January 12

Adventures of a Travelers Wife, January 20 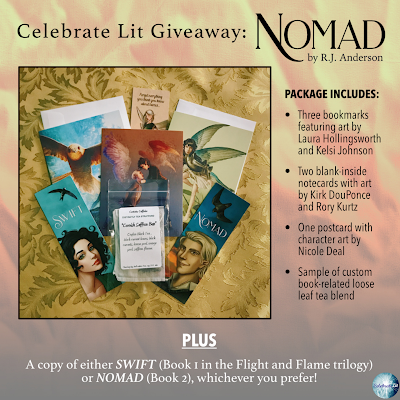 To celebrate her tour, R.J. is giving away the grand prize package of a three bookmarks, two blank-inside notecards with envelopes featuring artwork by Kirk DouPonce and Rory Kurtz, a postcard with character art by Nicole Deal, a sample of custom book-related tea, and a copy of SWIFT or NOMAD!!

Nomad is the second installment from The Flight and Flame Trilogy by RJ Anderson. I had the pleasure of reading book one, Swift. I enjoyed that one and I think I enjoyed this one even more. Even though it is part of a series, I believe it can be read as a stand alone. This story has some adventure and action. I did not find it to be predictable. I was entertained throughout and found it to be a fun read. I am so glad I had the chance to read it.

Nomad is getting four and a half stars from me. I look forward to the third and final book from The Flight and Flame Trilogy, Torch. I recommend this one for readers who enjoy clean young adult fantasy. It is definitely worth a read.

I received Nomad from the publisher. This review is one hundred percent my own honest opinion.