Blog Tour and Giveaway: Sing Until You Die by Carole Brown 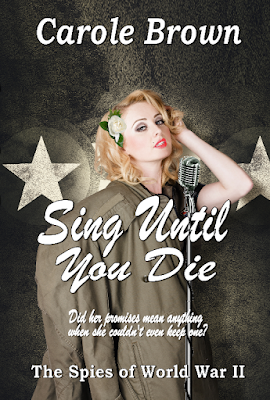 Book: Sing Until You Die

From childhood up, Claire Anne Rayner has despised the man who’s like a brother and son to the rest of the Rayner House residents. But when she puts her musical training on hold and begins singing to the troops as a means of helping support and encourage them, she is pulled into a mysterious spy’s efforts to destroy a certain high-ranking man.

Wills Mason is loved by everyone but Claire who cannot forgive him for his and her sister’s unmerciful, youthful teasing. But now, grown up and serving as a civilian spy, Wills must prove that Claire is not willingly relaying messages to the enemy, as his colonel believes, even when all evidence points that way. And can he prove he’s changed and can be trusted to cherish her heart as she deserves to be loved? 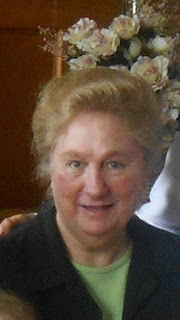 Besides being a member and active participant of many writing groups, Carole Brown enjoys mentoring beginning writers. An author of ten books, she loves to weave suspense and tough topics into her books, along with a touch of romance and whimsy, and is always on the lookout for outstanding titles and catchy ideas. She and her husband reside in SE Ohio but have ministered and counseled nationally and internationally. Together, they enjoy their grandsons, traveling, gardening, good food, the simple life, and did she mention their grandsons?

A Grip on the Story by Carole Brown

Unlike books one and two of The Spies of WWII series (With Music in Their Hearts and A Flute in the Willows), I couldn’t get a handle on where to go with Claire Anne Rayner and Wills Mason’s story in Sing Until You Die. I knew their names, knew their careers, but the plot evaded me until it was time to write the novel. And then…

Slowly the plot opened up:

The more I wrote, the more I loved these two faulty, but loveable characters. Were they perfect? No. Were they determined to do what they felt was their duty, what they knew was their calling? Yes and yes.

Claire, as a child and teenager, faced thoughtless and sometimes cruel teasings because of over zealousness from certain family and friends. In her youthful mind, she felt loathing for those hurting her and knew she’d never forgive those involved.

Wills, on the otherhand, as a youth, was bound to prove he was one better than his best friend. Nothing was too dangerous or too extreme for him to try. No matter how others might feel…

Yet, through loving family and friends, these two grew into adulthood as caring, serious, and  individuals determined to succeed in their separate pursuits. The only thing they needed to do was ask for forgiveness and forgive. Could they lay aside their accusations for each other and do it? Would they realize that past feelings and thoughts about the other might just be wrong?

I worked hard at showing the slow and sometimes painful process of their achieving that. But tying in the insidious spy, thrust these two adorable, but different, characters into each others’ lives. That brings about the question:

Will the web of deceit the mysterious German spy is weaving destroy their one chance of happiness with each other, or can they both let go of the past and work together to bring the spy to justice?

For Him and My Family, January 11 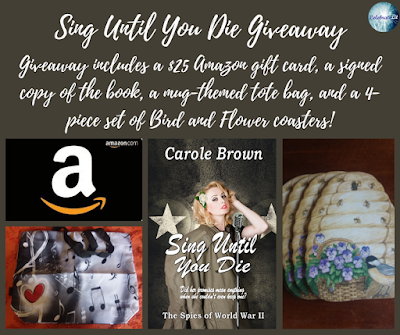 To celebrate her tour, Carole is giving away the grand prize package of a music-themed tote bag a 4-piece set of bird/flower coasters, a $25 Amazon gift card, and a signed copy of Sing Until You Die!!

Sing Until You Die is the third installment from The Spies of World War II series by Carole Brown. Since I have not had the pleasure of reading the previous books in the series, With Music In Their Hearts and A Flute in the Willows, I believe each one can be read as a stand alone. I did not feel lost or confused by reading this one. I thought it was a good story. I liked the history, mystery, suspense, and adventure. It was meeting the characters and I did not find their story to be predictable.

Sing Until You Die will be getting four stars from me.  I  look forward to reading the other books from The Spies of World War II series. I recommend this one for readers who enjoy reading clean historical mystery.

I received Sing Until You Die from the publisher. This review is one hundred percent my own honest opinion.