Based on Multiple True Events, Film Shines A Light on the Harsh Reality of Sex Trafficking in Suburban America 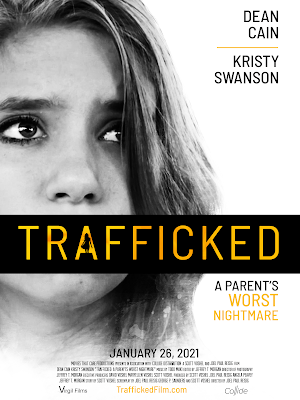 Detroit, MI - Feature-length drama TRAFFICKED: A Parent’s Worst Nightmare is poised to release on DVD and digital HD on January 26, during Human Trafficking Awareness Month.  Directed by Joel Paul Reisig and written by Reisig, George Sunders, and Scott Voshel, TRAFFICKED is based on actual stories of American families who have had their lives uprooted after a child has been abducted and trafficked. The film will be distributed through Virgil Films.

Bob Elder, President of Collide Media Group, shares, ”Awareness is the first step towards putting an end to these atrocities in our world. Trafficked is a heart-pounding feature film reminding us of how urgent this topic is and why we need to act now."

TRAFFICKED is the story of Allison Riley (Sophie Bolen - THE HORSE DANCER, RODEO GIRL), a beautiful young girl with a bright future and a dream of becoming a veterinarian.  On the eve of her 16th birthday, she sneaks out of her house to meet a handsome boy she met online, and disappears.  Her parents, Joanna (Kristy Swanson - BUFFY THE VAMPIRE SLAYER, FERRIS BUELLER’S DAY OFF) and Case (Mark Boyd - WHIP IT, “12 Monkeys”), contact the police who assume that Allison is just out with a boyfriend. They reluctantly hire Private Investigator John Belton (Dean Cain - Lois and Clark, GOD’S NOT DEAD ) who has a reputation for making his own rules.  Belton quickly discovers that Allison had likely been trafficked by a handsome young man she met online, and that he’s on a race against time if the Riley’s hope to see their daughter again.

Quote from Joel - “Human trafficking is reaching epidemic levels in the US, yet so many people don’t believe that an atrocity like this could happen in the US. I wanted to shine a light on this issue, and help viewers realize this could happen to any family, any where.”

TRAFFICKED: A Parent’s Worst Nightmare will release January 26, 2021 on DVD and all major VOD platforms.

About Virgil Films: Virgil Films & Entertainment was founded in 2003 by Joe Amodei to acquire, and distribute feature films, documentaries and original television series. Over the years Virgil has enjoyed partnerships with Sundance Channel Home Entertainment, National Geographic Cinema Ventures, Pure Flix Entertainment, Major League Baseball Productions, Morgan Spurlock’s Warrior Poets and other high-profile entertainment brands. Their feature films have been available on Netflix, Amazon Prime, Apple TV, Hulu, Vudu, Google Play, HBO, Starz, Showtime and many other digital and TV networks. Virgil Films releases include the Oscar-nominated documentary Glen Campbell…I’ll Be Me; the critically acclaimed best-selling Forks Over Knives; and the Oscar-nominated documentary Restrepo and its sequel Korengal. They have also released the entertaining I Am Chris Farley, I am Heath Ledger and I am Paul Walker along with the thought provoking We Are Columbine. Clarence Clemons, Who Do I Think I Am was the first in house production. Follow them on twitter: @virgilfilms | www.VirgilFilms.com

About Collide Distribution: Collide Distribution, a division of Collide Media Group, specializes in downstreaming home entertainment distribution through UPHE Content Group. Collide Media Group was formed in 2016 by veteran Christian entertainment marketing executive Bob Elder with a mission dedicated to “elevating media that inspires a deeper relationship with Christ.”  The Collide team has worked on over 50 Faith-Based films, creating and executing marketing campaigns that have generated billions of impressions and resulted in hundreds of millions of ticket transactions. The Group is officed in historic downtown Franklin Tennessee.  https://collidedistribution.com/

Purchase Trafficked after its release on Tuesday, January 26th and watch from the comfort of your own home!

I found Trafficked: A Parent’s Worst Nightmare to be a descent movie to watch. It is a powerful story of how quickly a young woman’s life changed in a matter of minutes. It shows the dangers of meeting people online and easily trusting strangers. As a parent of a preteen, it scares me to think this could really happen to my family. I think the movie would be an important one to watch with older teens. It is a helpful tool of talking about the dangers and being more aware of them. I do want to warn that it does have some strong language and some implications that may be too mature for some audiences and viewers.

I would give Trafficked: A Parent’s Worst Nightmare seven stars out of ten.

I received a digital code of Trafficked: A Parent’s Worst Nightmare for screening and reviewing purposes, but was not required to write a positive review. This review is one hundred percent my own honest opinion.

One of my readers will win ONE digital code for Trafficked. Please comment below and don't forget to leave an email address (email at domain dot com) with your comment so I can get in touch with you if you win! Winners will be drawn on Feb 5. Good Luck!