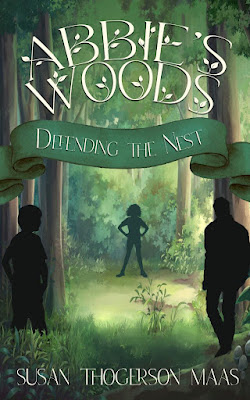 Twelve-year-old Abbie Keegan loves spending time in the woods behind her house and watching the silly-looking baby robins as they grow. The woods are a retreat from her parents’ constant bickering and from her sweet, but needy, little brother.

Then Abbie sees two boys breaking pop bottles in the pond. She refuses to allow such harm to “her” woods. However, every attempt she makes to stop the boys only provokes them to greater destruction. Her retreat becomes a place of fear instead of peace. A feud is born, and Abbie feels helpless to stop it. At home, her parents seem close to divorce and her brother’s asthma is getting worse. How can Abbie protect the people and places she loves? 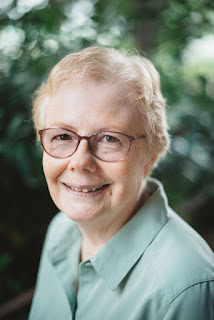 Susan Thogerson Maas grew up in the rainy, green state of Oregon. She loved to wander through the woods, discovering new wildflowers and birds. Her second favorite place was the cool grass of the front yard, lost in a book about nature or faraway lands. She still loves camping and hiking, as well as traveling to places she’s never seen before. Life should always be an adventure.

Abbie’s Woods: Defending the Nest, in its original version, was the first book I ever wrote. Although I had sold a number of short articles and children’s stories, it was my first attempt at a whole book. Being a busy mother and volunteer (den leader for seven years, Sunday school teacher, etc.), homeschooling our boys, growing a big garden for freezing and canning, and all that kept me busy. But my dream since third grade had been to write children’s books. My sweet aunt had paid my way to summer writing conferences, and my shelves were filled with books on writing.

So I began, one slow chapter at a time. I set the story in the woods that lay behind our property when I was a child. “The Wonderful Woods” I called it in the first article I ever sold—sent by my sixth grade teacher to The Horn Book. My book was filled with details about the plants and birds of the woods. I added in symbolism because this would be my masterpiece. After maybe three years, the book was complete. And it was terrible. I showed it to a couple of editors, but the responses told me it was not ready. I was not ready.

I put Abbie’s Woods aside and wrote two chapters books, which now sleep peacefully in old files on my computer. Then came Picture Imperfect, published in 2015 by Ashberry Lane. (now owned by WhiteFire Publishing) After years of study, practice, and critique groups, I finally wrote a book good enough for publication. It even won a couple of awards. And so I thought, why not give Abbie’s Woods another try? I began all over again, changing the characters, adding subplots, and dropping the stilted symbolism. And now here it is!

What do I like most about Abbie’s Woods? Well, for one thing, the woods. That woods is now preserved as part of the Springwater Corridor in the Portland, Oregon area. I learned to identify plants there, including the first flower whose scientific name I learned: arenaria macrophylla. I have no idea how I can still remember that! I especially loved the birds. As a teen, I often roamed the woods with binoculars around my neck and bird book in hand. I learned to recognize bird calls: the Steller’s jay’s screech, the cheerful chickadee’s call, the “chweee” of the towhee as it scratched for seeds in the undergrowth. And the robin’s song, so peacefully filling the air on warm summer evenings. Robins were always special, and robins play an important role in Abbie’s Woods.

But the book is about more than nature. It’s about a girl trying to preserve her little world, only to learn her best efforts often backfire, that many things are not under her control. Can she learn to let go of her pain and forgive those who hurt her? And can she learn to trust God for the things she cannot control? Abbie’s struggles are not so different from those many people face, whether children or adults. I have certainly acted in ways I thought would make things better, only to find the opposite result. I have also tried to control things that are better left in God’s hands. Although the story is entirely fictional, in many ways Abbie is also me, trying to follow God but often getting lost along the way.

Yet, for Abbie as for me, no matter how dark the day, there is always light behind the clouds, always the hope that tomorrow will be better. That hope is the foundation of my faith and a thread through everything I write.

Cats in the Cradle Blog, January 26

Lights in a Dark World, January 28

Because I said so — and other adventures in Parenting, January 29 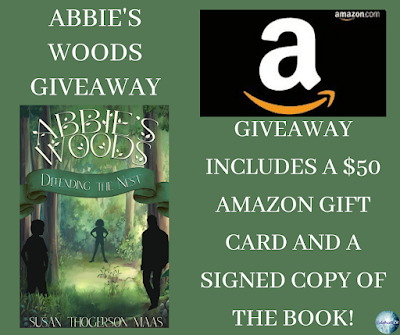 To celebrate her tour, Susan is giving away the grand prize package of $50 Amazon gift card and a copy of the book!!

I thought Abbie's Woods: Defending the Nest to be a good read for younger readers. I believe many of them will feel a connection to Abbie and will learn many lessons along with her. Some of those lessons many us older readers could learn from, as well. I thought it was a cute little quick story that shows the power of faith and God. I thought it was a pretty good read.

I am giving Abbie's Woods: Defending the Nest four and a half stars. I recommend it for readers who are between the ages of eight and twelve years of age, as well as, for those who enjoy reading fictional stories that can relate to.

I received a paperback copy of Abbie's Woods: Defending the Nest from the publisher, but was not required to write a positive review. This review is one hundred percent my own honest opinion.