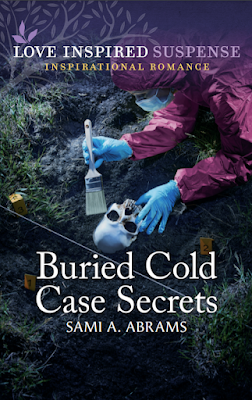 Could be the key to solving a murder…

Searching for her best friend’s remains could help forensic anthropologist Melanie Hutton regain her memories of when they were both kidnapped—unless the killer gets to Melanie first. For her safety, Melanie must rely on Detective Jason Cooper, who still blames her for his sister’s death. Can Jason set the past aside to solve the cold-case murder…and shield Melanie from the same fate? 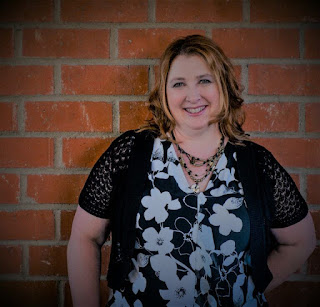 Two-time Genesis winner Sami A. Abrams and her husband live in Northern California, but she’ll always be a Kansas girl at heart. She enjoys visiting her two grown children and spoiling their sweet fur babies. Most evenings, if Sami’s not watching sports, you’ll find her engrossed in a romantic suspense novel. She thinks a crime plus a little romance is the recipe for a great story.

What writer doesn’t grow up reading every chance they get? That would be me.

Until my thirties, I hated to read. Then someone told me about Terri Blackstock, and I decided to give her books a try. I was hooked. I guess there’s something to finding the right genre. Romantic Suspense is it for me. Of course, that makes sense. I love CSI, NCIS, and Criminal Minds. Over the years, I have expanded my taste, but there’s just something about suspense that keeps me coming back.

A little over five years ago, I decided to start checking off some of the items on my bucket list. I learned how to rock climb and got my scuba certification, among other things. When I got to the item, writing a novel, I sat down and pounded it out. Check the box; I was done. Wrong. God had other plans and placed some amazing people in my life.

One of those plans was attending MurderCon, a conference for writers where they learn from experts about, you guessed it…murder. Actually, it’s about police procedures, crime scene analysis…the list goes on and on. One of the workshops I attended was with a forensic anthropologist, and the idea for Melanie Hutton and Buried Cold Case Secrets was born.

I loved writing Melanie’s story. She’s a fighter and refuses to let anything stand in her way, including the man, Jason Cooper, who blames her for her best friend’s death. Jason holds on to the past and his hatred toward Melanie, but he soon learns that if he puts aside his assumptions and listens, he’ll discover the truth about the day his sister died. Letting go of his anger and blame is tough for Jason, but when he does, he finds the life he’s always wanted.

I hope you enjoy reading Melanie and Jason’s story as much as I did writing it.

I’d love to hear from you. Please visit my website at samiaabrams.com and sign up for my newsletter.

Labor Not in Vain, January 11

For Him and My Family, January 12

For the Love of Literature, January 12

Lights in a Dark World, January 13

Because I said so — and other adventures in Parenting, January 16

Through the Fire Blogs, January 17

A Good Book and Cup of Tea, January 21 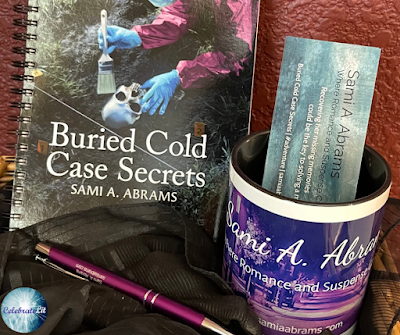 To celebrate her tour, Sami is giving away the grand prize package of a book, a coffee mug, a notebook, a pen!!

Buried Cold Case Secrets is the exciting debut by Sami A. Abrams. I thought it was pretty good. I enjoyed getting to know Melanie and Jason. I thought they had good chemistry together. I was wrapped up with their mystery and wanted to keep reading to find out what would happen next. I found it was not even close to being predictable. I had it all read in one sitting. It was great.

I received a digital copy of Buried Cold Case Secrets from the publisher, but was not required to write a positive review. This review is one hundred percent my own honest opinion.