In the spirit of The Good Place, Bill & Ted's Excellent Adventure, and The Hitchhiker's Guide to the Galaxy, author Russ Colchamiro has gone back to the future to deliver his wildest, funniest novel yet--the updated Sci-Fi/Fantasy tale Finders Keepers: The Definitive Edition.

When a jar containing the Universe's DNA falls from Eternity, bumbling backpackers Jason and Theo find their loyalties--and sanity!--put to the test. Unaware that a motley crew from another realm is chasing them across the globe to retrieve that radioactive vessel, these intrepid new friends are forced to contend with passion, responsibility, and their own mortality--and the fate of the Solar System, which hangs in the balance.

Traversing Europe, New Zealand, and the backbone of Eternity, Finders Keepers: The Definitive Edition ultimately asks one simple question: Is the life you're living the life you actually want . . . or does the Universe have more to offer than you can possibly imagine?

Russ Colchamiro is the author of the rollicking space opera, Crossline, the zany SF/F backpacking comedy series Finders Keepers, Genius de Milo, and Astropalooza, and is editor of the SF anthology Love, Murder & Mayhem, all with Crazy 8 Press.

Russ lives in New Jersey with his wife, two children, and crazy dog, Simon, who may in fact be an alien himself.

Russ has also contributed to several other anthologies, including Tales of the Crimson Keep, Pangaea, Altered States of the Union, Camelot 13, TV Gods 2, They Keep Killing Glenn, and Brave New Girls. Russ is repped by The Zack Company.

A SciFi Dad, Fending Off Ninjas
By Author Russ Colchamiro


As a matter of full disclosure, my life is... exhausting. Good, but exhausting.

During the day I work in New York City real estate as a media consultant (I’m a former journalist), I have an unholy commute to and from New Jersey, where I now live (90 minutes, minimum, each way), and I’m an active author who mostly writes science fiction, fantasy, and mystery novels, novellas, and short stories.

A son and a daughter. One of each.

My kids love that I’m a writer. They know all of my book covers by heart, even from a distance. And, believe it or not, we’re co-authors on a series of YA scifi short stories we plotted together, appearing in BRAVE NEW GIRLS, an annual anthology dedicated to and featuring teen girls in STEM (science, technology, engineering, and mathematics).

Our story, “My Other Treehouse is a Rocket Ship”, came out this summer, and the next one, “Independence Day” is scheduled for summer 2019.

And yet, as I continue to pump out new novels, my daughter in particular, who is already a voracious reader, keeps asking me if she can read the novels I’ve written.

As a dad, it’s an incredible feeling.

But also, as a dad, I have to be responsible.

My newest book, Finders Keepers: The Definitive Edition, is a scifi comedy, loosely based on a series of backing trips I took through Europe and New Zealand, set against a quest for a jar that contains the Universe's DNA (think The Good Place, Hitchhiker’s Guide to the Galaxy, and Bill & Ted’s Excellent Adventure).

I’ve told my ninjas that Finders Keepers and the two sequels, Genius de Milo and Astroplaooza, are for readers 15 and up.

My ninjas know this, and seem to accept the age restriction, but they keep asking anyway, as kids are known to do, thinking that, sooner or later, I’ll give in (spoiler alert: I won’t).

I have no idea if either or both ninjas will follow in my footsteps as an author. It doesn’t matter to me if they do. I want them to make their own choices, follow their own paths.

But as a Dad — and an author — it’s hard not to feel valued and loved by those ninjas of mine, who want to know more about my world, and the worlds I create.

Now all I have to do is uncover a few more hours each day to sleep so that I’ll have enough energy and focus to write the next book… and fend off my ninjas’ requests to read it. 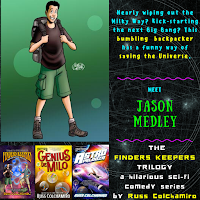 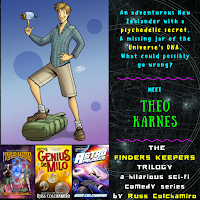 Finders Keepers: The Definitive Edition is the beginning of Russ Colchamiro’s series, also called Finders Keepers. It tells the story of….. a radioactive jar of Universe’s DNA? And the crazy duo Jason and Theo being chased down by others from another realm all over world, such as, England, New Zealand, and other places in Eternity. They have no idea they are being followed and they have what others want. Earth and the whole solar system’s fate is in these crazy friends.

Finders Keepers: The Definitive Edition is quite the quirky, crazy and wild tale. I am not a huge fan of fantasy or science fiction. However, this one kept me intrigued and wondering where the story was going to lead to. I have to admit it made me laugh a few times. I had no idea this genre could be so fun, which I found it to be unique, refreshing and delightful. Jason and Theo are something else. They go on quite an unpredictable adventure that made me wondering what in the world are they going to do or get into on the following pages.

Finders Keepers: The Definitive Edition is one that should not be missed. I think many other readers would enjoy it, as well. Even if they are not fans of this genre, like me. I would love to continue reading the rest of the Finders Keepers series. I want to know what is going to happen next and see what kind of crazy ride the reader will take then.

I am giving Finders Keepers: The Definitive Edition four stars.

I received this book from the publisher. This review is 100% my own honest opinion.
Posted by Amybooksy at 7:33 AM