Welcome to the cover reveal of Maggie Mae Gallagher's latest book The Fixer Upper which will be released September 6. Enter the Rafflecopter at the end of the post for a chance to win a $15 Amazon/BN GC. 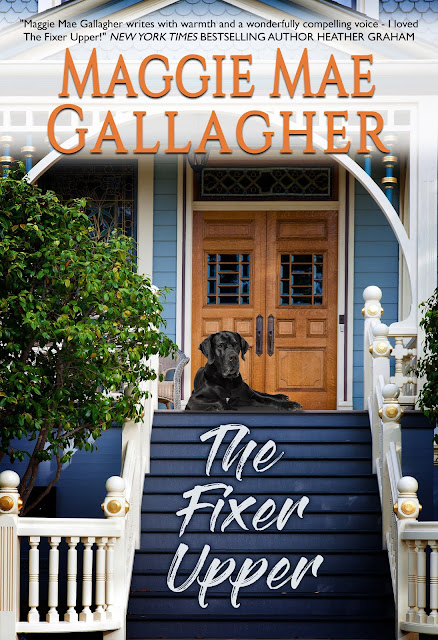 Abby Callier is more in love with Shakespearean heroes than any real man, and she’s beginning to wonder if there is life for her outside the pages of a book. It doesn’t help that her esteemed parents tend to view her as they would one of their science experiments gone wrong. On the eve of finishing her dissertation, she escapes her staid existence to live in the house she inherited from her Great Aunt Evie in the small town of Echo Springs, Colorado. Because, let’s face it, when a woman starts comparing her life to horror films, it might be time for a break.

Sheriff Nate Barnes believes in law and order and carefully building the life you want. In his spare time, he has been remodeling his house in the hope that one day it will be filled with the family he makes. But Nate doesn’t like drama or complications and tends to avoid them at all costs. And yet, when Miss Abigail Callier, his newest neighbor, beans him with a nine iron, he can’t help but wonder if she might just be the complication he’s been searching for all along. It doesn’t hurt that he discovers a journal hidden away by the previous tenant and decides to use Old Man Turner’s advice to romance Abby into his life.

Abby never expected her next-door neighbor, the newly dubbed Sheriff Stud Muffin, to be just the distraction her world needed. The problem is she doesn’t know whether she should make Echo Springs her home, or if this town is just a stopover point in her life’s trajectory. And she doesn’t want to tell Nate that she might not be sticking around—even though she should because it’s the right thing to do, the honest thing—because then all the scintillatingly hot kisses with the Sheriff will come to an abrupt halt. Did she mention that he’s a really great kisser?

The Carruthers’ property was on a half-acre of land. The two-story home had fallen into disrepair. The pale blue paint was cracked and peeling in places. One of the black shutters had slats broken out of the middle. Jed was a mechanic at one of the local garages, who liked his whiskey more than he did working. And it showed. His wife, Clare, had taken herself and the kids to her parents’ house, which was only three miles away.

Nate knocked on the door. “Jed, this is Sheriff Barnes. I need you to open the door and come out with your hands in the air.”

“Fuck off,” came a slurred shout from inside.

Nate sighed. From the sounds of it, the man was already well on his way to being shitfaced. “Jed, don’t make this more difficult than it needs to be. I have a warrant for your arrest. If you come with me now, peacefully, it will help your case.”

Deputy O’Leary stood off to the side of the front door of the ramshackle home with its screen door torn in spots. When there was no response from Jed, Nate nodded at O’Leary, who made his way around to the back to ensure the idiot didn’t try to go out the back door and escape.

“Jed, I’m going to give you to the count of five and then I’m coming in.”

There was a shout from O’Leary around back. Nate took off and sprinted to the edge of the porch, just in time to watch Jed, in a pair of white boxers and nothing else, race around the corner and head toward the street.

Nate charged after him on foot. This was why he ran six miles a day—so he could catch morons like Jed who thought they could outrun the police. Nate snagged him by the neck and wrestled him down to the ground. He took an elbow to the chin and swore before he had Jed pinned on the ground with his hands behind his back. Not quick enough, he thought as he slid the cuffs on Jed’s wrists.

“For that stunt, I will be adding resisting arrest and assault on a police officer, Jed.”

“Piss off, pig!” Jed yelled, uncowed by the fact that he was handcuffed. From the smell of him, he had started early on the Jack Daniels.

Nate shook his head and began reading Jed his Miranda rights. His chin throbbed like a son of a bitch and it wasn’t yet noon. So much for having a slow and easy day.

Visit her on social media here:

And if you like your romance with a bit of spice and kink be sure to check out Maggie Mae Gallagher writing as Anya Summers on Amazon! https://www.amazon.com/Anya-Summers/e/B01EGTVRKC/