Blog Tour and Giveaway: Growing Up in Disneyland by Ron DeFore 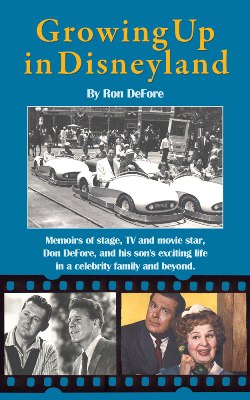 Description Growing up in Disneyland by Ron DeFore

Part biography about TV and movie star, Don DeFore, and his son’s accounts of life in a celebrity family and beyond. Don DeFore made more than 35 movies in the ‘40s through the ‘60s and co-starred in more than a dozen.  He is best known for his role as “Thorny” the first next-door-neighbor on “The Adventures of Ozzie and Harriet” and “Mr.B” in the 1960s TV sitcom, “Hazel.” The book includes much of Don's unpublished autobiography, ‘Hollywood-DeFore 'n After.’ ‘Growing up in Disneyland’ is a metaphor for Ron's life growing up in a celebrity family filled with Fantasyland adventures he equates to a Forest Gump type life, from meeting the Beatles, Beach Boys, Led Zeppelin, and other celebrities as Associate Director of the Steve Allen Show. His nearly 20 careers include a mid-life crisis as the Flying DJ at an L.A. discotheque to political positions within the Reagan Presidential Administration to establishing his own company. ‘Growing up in Disneyland’ is also to be taken literally, as Ron spent much of his youth in Disneyland where his father owned "Don DeFore's Silver Banjo Barbecue" restaurant in Frontierland. Ron and his brother, Dave, have given presentations to various Disneyland interest groups after which many attendees suggested, you should write a book. ‘Growing up in Disneyland’ will be enjoyed by any age group from baby-boomers that remember Don DeFore's many beloved acting roles to those that don't but are curious how life was in the good-old-days, especially growing up in a Hollywood celebrity family. Ron has had so many careers and adventures along the way that readers will have much to keep them from putting the book down.


Praise Growing up in Disneyland by Ron DeFore

“I enjoyed the flow of the book and how the author kept the momentum going, allowed the reader to adjust and then took them on a journey where they experienced the larger than life personality of Don DeFore. The language was simple yet encouraging. Ron DeFore draws the reader in and once they have entered the colorful world of the DeFore family, they won't want to leave. Incredibly vivid and entertaining!” - Rabia Tanveer for Readers' Favorite “I found the life and works of both author Ron DeFore and his father Don to be a truly fascinating tale of legacy, the surreal nature of fame and the bubble-like existence which that kind of family life brings with it. Ron writes with a candid nature and kind words, recalling many adventures with a nostalgic tone that is sure to hit the hearts of those who were living during the time of the Beatles and the Beach Boys, to name but a few. For me, it was a glimpse into a past I'd no experience of, and the recollections by both Don and Ron brought everything to life with fascinating detail and authentic voices. I learned an awful lot during this heartfelt tale, and I would certainly recommend ‘Growing Up in Disneyland’ to readers who remember the fifties, but also those who would like a true portrait of Hollywood lives at the time.”-K.C. Finn for Readers' Favorite “A must Read Biography of a Film Star and Television Icon.  A fascinating read to hear his story from the viewpoint of his son, Ron who experienced every kid’s dream/ a wonderful childhood who had a golden pass to Disneyland”-Rick Lertzman, Amazon Review

Excerpt for Growing up in Disneyland by Ron DeFore

The script my MCA. Agent, George Chasin, brought to me next in 1947 was “It Happened on Fifth Avenue.” “The producing company will be Roy Del Ruth Productions with Allied Artists, a new ‘A’ product with Monogram Studio,” he said. He saw I was about to cut in and hurried on. “Don, this will be the first of several top-budgeted pictures in this studio’s future plans.” “It’s a great story,” Chasin continued. “After the war, Frank Capra owned two excellent scripts, ‘It Happened on Fifth Avenue,’ and ‘It’s a Wonderful Life.’ He didn’t want to pay option money on both and decided to sell ‘Fifth Avenue’ to Roy Del Ruth, who, by the way, made a terrific record of successful films at Warner Brothers. We at the agency are confident it’ll be a well-made picture. You’ll be co-starred with Victor Moore, Charles Ruggles (currently with me in ‘Ramrod’), Ann Harding and a fairly newcomer to ‘A’ pictures, Gail Storm, and you’ll get first-on-the-left co-star billing. If you’ll accept the role, it has been hinted that there might be a nice bonus in it for you.  Call me when you’ve made your decision.”
“It Happened on Fifth Avenue” was a terrific story and script. There was no doubt in my mind, and after discussing it with Charlie Ruggles, I phoned my acceptance decision to Chasin at MCA.   Once back in L.A., numerous negotiation sessions between Chasin and myself and the Fifth Avenue Production Company were held. The question of my bonus was discussed in particular. Chasin reported to me that a decision was made that my bonus would be $75,000. The minute my boss, Hal Wallis, heard about it he demanded $25,000 of that bonus. When I heard about this, I told Chasin to tell them to forget about me doing the picture, that I’d done five pictures in a row plus a Broadway play and that I’d rather take a little vacation. However, when Chasin assured me that I would not only get the remaining $50,000 but I might receive another $20,000 at the film’s completion I signed, accepted the deal, and that set into motion the construction plans for our new home.
This film was the story of a wealthy New York couple in their sixties who every winter boarded up their Fifth Avenue mansion to winter in their summer home in Bubbling Springs, Virginia. They had an attractive, college-attending daughter, played by Gale Storm. Shortly after each winter’s boarding-up of the mansion, a harmless, friendly tramp (Victor Moore) with his little dog, would enter the mansion through a rear coal chute and live there through the winter. During this particular occupancy, he befriends several young war veterans and brings them to the mansion to live, with the understanding that each must have his chores to do and no one is to do any damage to the dwelling. My character is one of the veterans, who had handcuffed himself to his bed to avoid being evicted from his apartment. Two other veterans in the story have wives;  one couple has a baby. Victor Moore, after enjoying a highly successful Broadway career (predominantly in musical comedies and usually with Billie Gaxton) as well as a motion picture career, was already in his late seventies when he signed to play the little tramp in this movie. I greatly appreciated the opportunity to work with Victor, as I’d enjoyed him in the past in his musicals on Broadway. Likewise, it was enjoyable working again with Charlie Ruggles and Anne Harding, a very attractive lady as well as an excellent performer. Another warm friendship was forged on this film between Alan Hale, Jr. and me. Every day was funsville working with this big loveable Saint Bernard, who had several new jokes for us every day. We remained friends until his death. Also, it was a pleasure working with the studio’s pretty young ingenue, Gale Storm, who became a family friend. Advance newspaper and radio reports regarding the premiere of “It Happened On Fifth Avenue” were unusually glowing, even from the major entertainment critics of the day including Walter Winchell, Louella Parsons, and Hedda Hopper. The film was constantly referred to as “the sleeper of the year” movie, a possible Oscar contender! It was one of the most star-attended premieres ever, and although it was my second world premiere, it was a great thrill to me. Not only was it an excellent film but in addition, I had the top co-starring billing! Limos had been provided for the cast and their families. I suddenly realized that my first four movies in which I was a co-star had been declared ‘big hits’, box office as well as career-wise and as we stepped from our limo, at the world-famous Grauman’s Chinese Theater on Hollywood Blvd., the shouts and cheers from the large crowd sent the adrenaline flying! 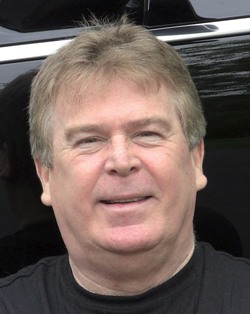 Ron DeFore is the second son of movie, television and Broadway star, Don DeFore. He has one brother, David and three sisters, Penny, Dawn, and Autumn. He has had nearly 20 careers from TV and film production, real estate, Disc Jockey, senior executive in the Reagan Administration, to forming his own successful public relations firm in Washington, D.C. Ron has since retired from his firm and continues to consult and write, “Growing up in Disneyland” being his major project since 2018. Ron is married to Laurie Gambino Website: https://growingupindisneyland.com/ Facebook: https://www.facebook.com/GrowingUpinDisneyland Twitter: https://twitter.com/Moviestarson Instagram: https://www.instagram.com/sonofmoviestar/ 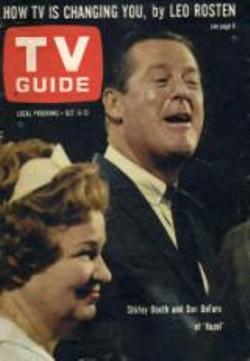 
Buy Growing up in Disneyland by Ron DeFore


Giveaway Growing up in Disneyland by Ron DeFore

This giveaway is for the winner’s choice of one print or ebook copy of the book. Print is open to the U.S. only and ebook is available worldwide. There will be 3 winners. This giveaway ends November 1, 2019, midnight pacific time. a Rafflecopter giveaway


Follow Growing up in Disneyland by Ron DeFore Tour 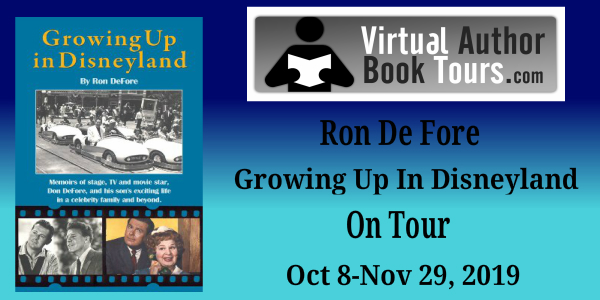 
I have to admit that I was not sure if Growing Up in Disneyland would be a read for me. The author, Ron DeFore, is the son of Don DeFore, the actor who played in the classic and popular TV show, Hazel. Within a couple of chapters, I was hooked and wanted to keep reading. I had it read in just a few hours – hours very well spent. I enjoyed reading about the DeFore family.

I am giving Growing Up in Disneyland a very well deserved five plus stars. I have already highly recommended it to my family and friends.