Book Tour and Giveaway: Sword of Soter by Ralene Burke 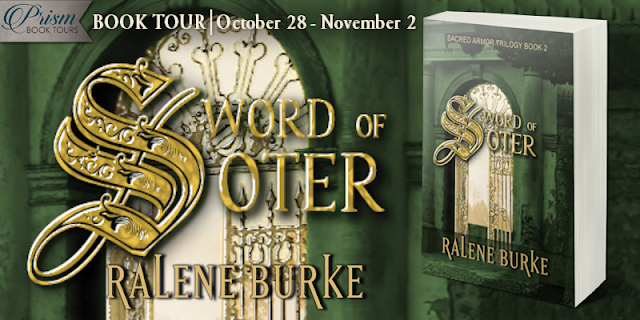 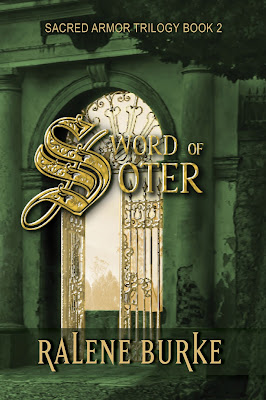 NOT EVERYONE CAN BE TRUSTED …

Karina, Tristian, Rashka, and Sam venture forth into the wilderness of Soter on the next leg of their quest to retrieve the Armor of the Creator. With the ancient evil already affecting the kingdom, nothing in Soter is what it seems—from what skulks beneath the canopies of the woods to what lies within the sleek white and gold of the capitol city to the people Karina and Tristan have known since they were children.

Danger lurks around every corner. Discerning who to trust is paramount to staying alive and discovering the location of the Temple of Soter. Yet, to Karina’s horror, Faramos’s reach finds them time and again. The longer they are forced to dawdle, the more people are affected by the growing panic in Soter, and the closer Faramos is to taking over the Three Kingdoms. Can Karina retrieve the information they need while Tristan keeps his brother at bay? Or will the entire quest disintegrate before they even arrive at the temple?

From Chapter 16:
“You love her, don’t you?”
“No. Well, yes. at is—I did.” Sabreen’s puzzled look mirrored exactly how Sam felt trying to answer her question. He sucked in a deep breath. “I never really thought of Karina in that way for many years. She was the king’s ward, out of my reach anyway. But when all this”—he waved his hands around—“happened, I realized how much she really meant to me. Even when Queen Anaya insisted Karina was dead, I didn’t believe the report. I searched for her myself.”
Sabreen clasped her hands together and held them near her heart. “And you found her.” The words sounded sarcastic, yet there was a hint of some other emotion—something Sam could not determine.
He chuckled. “Yeah, I found her with a bounty hunter.”
She gasped. “How did you all get away?”
“We didn’t. Turns out the bounty hunter was helping her. At least he was by then. After he kidnapped her. After he took her to Faramos.”
“Faramos? e king of Tzedek?”
“Karina is some kind of Chosen One and was threatening all his plans.”
“So, what happened next?”
“Well, we met up with an elf guardian and continued on Karina’s quest.”
“A quest to what?”
Sam paused, twiddling his thumbs a bit. Should he tell her the rest? He eyed her closely before sucking in a deep breath. “Retrieve the sacred armor of the temples in order to defeat an ancient evil infecting our world.”
Sabreen’s mouth hung slightly ajar, her eyes wide. “The sacred armor?”
He nodded. “In the midst of all of this, I realized how much I love her. How much I want to protect her. But …”
Sabreen seemed to recover from her surprise as she leaned forward and placed her hand on his knee. “But what?”
He let out a deep sigh. “But she was already falling for another.”
“Another? Who?” Sabreen’s eyes widened. “Don’t tell me she was falling for the bounty hunter!”
He nodded.
“What? Why? He kidnapped her!”
He got up and poured himself more tea, his angry thoughts knotting his muscles once again, constricting his chest as he struggled to breathe. How many times had he had those exact same thoughts himself? Why would she choose a flawed man like Tristan? Sure, he was nice enough now. But all those things he had done in his past—the people he’d killed, the lives he’d ruined—and all for an evil warlock.
Yet Sam had been by her side ever since she’d returned to Aletheia. He’d helped Jace nurse her back to health after he’d brought her to the royal house. They had played together in the courtyards and the stables. He’d taught her to ride a horse properly and had tried to teach her to wield a sword, though Queen Anaya had put an end to sparring rather quickly. He’d been a listening ear, a shoulder to cry on, a friend.
And she still chose the bounty hunter. The assassin.
He stared at Sabreen, who was searching for something in her pack again. Maybe he should forget about Karina and move on. 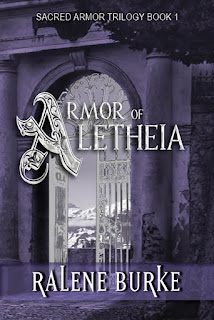 The death of her king changes Karina’s life forever. Fleeing the royal house, she must leave her life behind to seek out the Armor of the Creator—to save the very people who now hunt her.

Faramos, the evil warlock waiting to unleash hell, knows the Creator has already chosen his warrior, so he sends his bounty hunter to retrieve her. After Tristan abducts her, he witnesses Karina’s gentle nature and strong independence, and he finds he can’t complete his assignment.

Together, they set out to retrieve the armor and defeat the hordes of creatures sent to destroy them. But is Tristan’s heart secure as he faces certain death for defending the queen? And will Karina have the courage to become all the Creator intends her to be? Failure will condemn the world to eternal darkness. 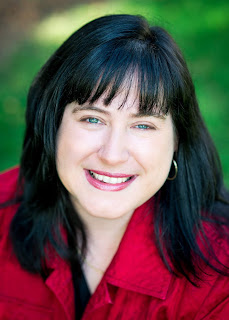 Whether she’s wielding a fantasy author’s pen, a social media wand, or a freelance editor’s sword, Ralene Burke always has her head in some dreamer’s world. And her goal is to help everyone #SHINEBeyond their circumstances! Her fantasy novels are available on Amazon.

When her head’s not in the publishing world, she is wife to a veteran and homeschooling mama to their three kids. Her Pinterest board would have you believe she is a master chef, excellent seamstress, and all-around crafty diva. If she only had the time . . . You can also find her on Facebook, Instagram, Twitter, or at her website.

One winner will win a prize pack that will include print copies of Armor of Aletheia and Sword of Soter, a plush blanket, a tumbler with candy, a journal, and a pen all inside a half-bushel basket inlaid with a gorgeous book print material.
US only
Ends November 6, 2019