Blog Tour and Giveaway: About an Earl by Diana Lloyd

About an Earl by Diana Lloyd

An outsider at her first English ball, Jewel is fascinated with the beautiful dresses and the lovely dancing, but she’s vowed to save the Earl of Winchcombe from her cousin’s marriage trap. When she first glimpses the handsome lord, her heart beats faster. As they plan to thwart her cousin’s machinations, she discovers a kindred spirit in Oliver—even if he’s a peer and she’s a lowly colonist. Caught kissing the earl, the ball ends in disaster and Jewel’s displeased uncle whisks her away to Scotland.. Lord Scar, as the ton calls Oliver, would rather be anywhere than at a godforsaken masquerade ball and when he learns from the free-spirited colonist about the nefarious marriage plan, he grudgingly accepts her help. Jewel intrigues him and sets his heart racing. Yet, when the ball is over and the mask is off--Oliver curses the scar that will send her screaming away. When her uncle banishes her, Oliver comes to her rescue by offering Jewel his hand in marriage. She agrees, despite his disfigurement. But what’s a beastly lord like him to do with such a beautiful wife--especially when he discovers she’s delightfully saucy?

Diana Lloyd, mother of gingers, lives in the state shaped like a mitten. Diana has loved books since she first ate one and appreciated them even more once she learned to read. Enjoying an occasional tumble down the rabbit hole of research, Diana writes historical romance by mixing equal parts History, Heart, and Humor. A 2017 RWA Golden Heart finalist with HOW TO TRAIN YOUR BARON, Diana is anxiously awaiting the publication of book two ABOUT AN EARL and book three LAST LORD STANDING in the "What Happens in the Ballroom" series. To stay up to date on all of Diana's projects, visit her website. You can also find her on Facebook, Twitter, Pinterest, BookBub, and Goodreads.

During the Blog Tour, we are giving away a $10 Amazon Gift Card! To enter, please use the Gleam form below. Giveaway Rules – Giveaway ends at 11:59 pm EST on February 10th. You must be 18 or older to enter. – Paperback giveaway is open to US only. – Only one entry per household. – All giveaway entrants agree to be honest and not cheat the systems; any suspicion of fraud will be decided upon by blog/site owner and the sponsor, and entrants may be disqualified at our discretion. – The winner has 48 hours to claim prize or a new winner is chosen. About an Earl 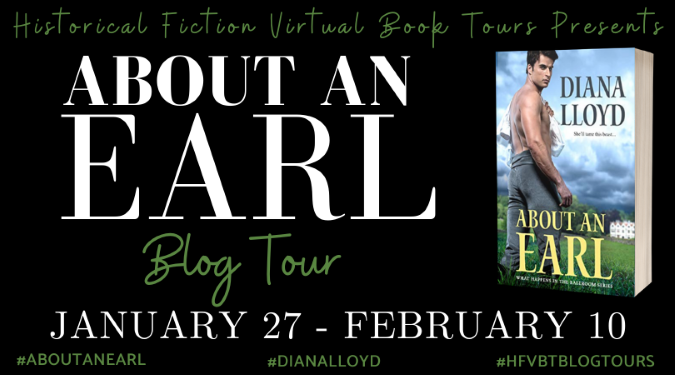 About an Earl is the second installment from the What Happens in the Ballroom series. It is, also, my first introduction to the writing of Diana Lloyd. I enjoyed this historical romance. I absolutely adored the characters of Jewel and Oliver. The story is a little predictable but still a delight to read.

I am giving About an Earl four stars. I would love to read more by Miss Lloyd in the future. Lovers of historical fiction and romance will definitely want to read this one. I am happy to have the opportunity to read it.