This post is part of a virtual book tour organized by Goddess Fish Promotions. Bobbi Smith will be awarding a $10 Amazon/BN GC to a randomly drawn winner via rafflecopter during the tour. Click on the tour banner to see the other stops on the tour.

A NOTE FROM THE AUTHOR: 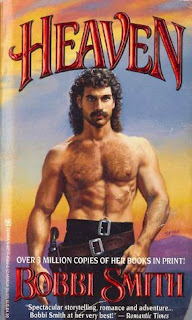 I just wanted to tell you a little about the story behind Heaven. When it first came out, I was honored to have David Alan Johnson, the very first Romantic Times Cover Model winner, as my hero on the cover! What fun! David and I did book tours together and had a great time meeting all our fans. I’m including a picture of David’s cover for our blog tour. Hope you enjoy Heaven! 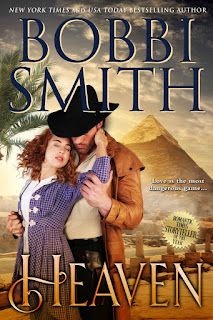 For archeologist’s daughter Alexandra Parker, the Crown of Desire isn’t just a priceless and mysterious artifact—it could mean the difference between life and death.

And to find it, she must embark on a dangerous journey in the company of a man she hardly trusts. Wealthy Englishman Winn Bradford is seductive, charismatic, and the last person she should fall in love with. But Alex, too, has a secret—one that puts Winn’s safety at risk, and will force her to choose between loyalty and an extraordinary love…

Having just returned from his Uncle Edward’s funeral, Winn sat at his uncle’s desk, holding the letter and book the servant had just given him.

It is with great sorrow that I am writing to you. I have decided to disinherit my sons. They are greedy, shallow men, and it shames me that they bear my name.

You will only receive this letter after my death. Let me say your friendship and faith have been a light for me in the darkness of my life.

There is one treasure in my collection that has meant more to me than all the others. The Crown of Desire is an ancient Egyptian relic, supposedly cursed by the last princess to possess it. Those who claim it in greed will also be cursed. That is why I have chosen you to lead the search for the crown, which I’ve hidden away.

Your faith has marked you as a man to be trusted. There are two other books with clues. One has been sent to Professor Parker in Boston and the other to Matthew McKittrick, also of Boston. They will work with you.

Know that I have chosen you for your faith, your eternal optimism and your undying love. I trust you with my greatest treasure.

Winn picked up the book and read the baffling inscription within. Rising from the desk, he paced the study as he tried to decide what to do. Lawrence had been counting on his uncle’s help. Winn could do no less than fulfill his request. He would take his uncle’s place and lead the quest to find the crown.

Winn headed upstairs to his uncle’s bedroom to get the clothes he would need to fulfill his role as Father Edward.