Review Tour and Giveaway: A Winter Knight by Barbara Bettis

A Winter Knight
by Barbara Bettis 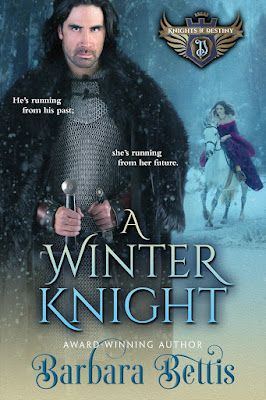 Sir Nicholas has given up on marriage. These days he’s content to captain his friend’s troops and avoid entanglements—until one winter night when he rescues a half-frozen woman from a snowstorm. Her irrepressible spirit and kindness to others reminds him that all ladies aren’t like his former intended, who wed his brother while Nick was on crusade. But he can’t open his heart to Lady Clare. She’s bound to another, and Nick won’t forfeit his honor. Even if she were free, he has nothing to offer but love, and this lady deserves everything.

Lady Clare’s dying grandfather has arranged her betrothal, but the arrival of the man she’s to wed sends her fleeing into a snowstorm. Injured when her horse stumbles, she’s rescued by a mysterious knight. She recovers at his run-down manor, safe at last—until her betrothed tracks her down two days before Christmas. Trapped at home with the wedding imminent, she longs for the winter knight she’s come to love.

Only a miracle can bring Clare and Nick together. But at Christmas, anything is possible.
~~~~~~~~~~~~~
EXCERPTS
Scanning the landscape, Nicholas spotted a mound in the road a few paces ahead. Odd place for a drift. He swung down and approached. Not a drift. He hunched beside the motionless form. A smattering of snow blended with the cloth that covered the mound. He pulled aside a corner of—fine, white wool? The inside of the material was lined in fur. The whole was tucked around a body.
Tugging gently, Nicholas freed more of the cloth to uncover a female, huddled in upon herself. When he turned the still figure, her head fell to the side, revealing bluing lips in a face as white as the ground.
Merciful God.
She is dead!
He lifted her into his arms and stood. What was he to do with a dead female? He glanced at her form again. Dead—lady, his mind amended. No companion or maidservant would be dressed in such a fine gown or wear a fur-lined cloak worth more than Nicholas’s first set of armor. And that had been damned fine chain mail.
He turned toward Solomon, jostling the body higher against his chest. A soft “Umh” reached his ears.
He paused.
She lives?
Merde. She lives!


~~~~~~~~~~~~~
AUTHOR Bio and Links:
Award-winning author Barbara Bettis has always loved history and English. As a college freshman, she considered becoming an archeologist until she realized there likely would be bugs and snakes involved. And math. Through careers as a newspaper reporter and editor, then a college journalism and English professor, she’s retained her fascination with history. Give her a research book and a pot of tea, and she’s happy for hours. But what really makes her smile is working on a new story. Now retired, she lives in Missouri where she edits for others and spins her own tales of heroines to die for—and heroes to live for.
Find Barbara Here:
Bookbub: https://www.bookbub.com/authors/barbara-bettis
Goodreads: https://www.goodreads.com/barbarabettis Facebook: .http://www.facebook.com/BarbaraBettisAuthor
Twitter: http://www.twitter.com/BarbaraBettisAuthor
Website / Blog / Newletter: http://barbarabettis.com
BUY LINKS:
Amazon: https://amzn.to/356xovq
The book will be $0.99 during the tour.
~~~~~~~~~~~~~
GIVEAWAY:
Barbara Bettis will be awarding $25 Amazon or Barnes and Noble GC to a randomly drawn winner via rafflecopter during the tour.


A Winter Knight is the second installment from Barbara Bettis series, Knights of Destiny. Even though it is part of a series, I believe it can be read as a stand alone. I enjoyed this wonderful romance. It was a quick and sweet read. I had no problem staying engaged from start to finish.

I am giving A Winter Knight four and a half stars. I would love to read the previous book from the Knights of Destiny series.