Review Tour and Giveaway: Angels On Overtime by Ann Crawford

Angels on Overtime
by Ann Crawford 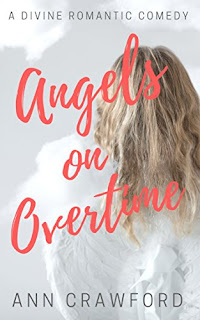 ~~~~~~~~~~~~~
GENRE: Inspirational, metaphysical, visionary
~~~~~~~~~~~~~
BLURB:
This divine romantic comedy is a multiple award winner in the inspirational category. Humans Jack and Emily seem to be just trudging through the motions of life, to the frustration (lovingly, of course) of their angel teams, especially newbie angels Brooke and David. Angels on Overtime goes deep and high…it’s a great behind-the-scenes glimpse into our lives—and even into the scenes behind those scenes. And who's love story is this, anyway? Laugh your way to enlightenment with this fun, whimsical, captivating tale that reminds us it's never too late to find love and for dreams to come alive.
~~~~~~~~~~~~~
NOTE: On sale for only $0.99 during the tour!

~~~~~~~~~~~~~
EXCERPT
Several drunks snore in a doorway. David notices that they shimmer with light. Their computing angels compute, their watching angels watch, and their whispering angels whisper to them: “You are loved. You are a blessing. You are a miracle. You can wake up to the light that you are—any time. You are loved. You are a blessing.”
Angela and David watch them for a while, until she taps him on the shoulder and points to one particular man. “Look, he’s about to die. You can see his family, his friends, even his dog—they’re all lining up to greet him.”
David notices that the dying drunk shimmers more than the others and that light beings, including one in a canine shape, hover over him.
“But don’t beings move on to their next incarnation, their next phase, whatever that is?” David asks. “How can all of them be waiting for him—and all those beings for all those humans—when they die?”
“It’s a hologram,” Angela explains. “One piece represents the whole. We’re all part of this whole, plus we can be anything at any time, anywhere. So our beloved ex-humans/light beings here can be on to their next phase, whatever that is, and they can be there to greet their loved ones when they pass on and congratulate them for a job well done.”
“But this one was a drunk!”
“That was his disguise, yes. We’re all drops in the vast ocean of infinity, cleverly disguised as a drunk or an angel or whatever we choose. And just living a life on Earth is a job well done. It’s not exactly easy here, you may have noticed.”
The drunk slowly opens his eyes. As he notices his three angels sitting around him, he blinks. When they don’t disappear—they’re really there, he realizes—he tries to sit upright but fails. The computing angel puts away his computer.
“Look, he’s about to talk to his angels,” Angela says. “He’s at the point where he can see between the worlds.”
“Am I dying?” the drunk asks his angels.
“Yes, my love,” responds an angel. “You are. But it’s not an ending. It’s a new beginning.”
“Anything’d be better than this.”
“You did well, my dear,” says another angel. “Earth is one of the toughest places in the universe.”
“Probably could’ve done better.”
“Yes, perhaps you could have,” responds the third angel. “Perhaps next time you will. It’s your choice. And it’s all good.”
Tears roll down the man’s face.
“Your family and friends are waiting for you.” An angel points to a shaft of light that has appeared overhead, much like a spotlight shining in a theater.
“They hated me!”
“They don’t any more.”
“I didn’t do too well here.”
“You evolved your soul. That’s all you needed to do.”
The drunk leans his head back and slumps as the life force leaves his body. His human-shaped form of light detaches itself from his physical body—hands and feet first, then his head, and then the rest of the light body follows. His light form starts to rise. A chorus of cheers and party sounds—barks, too—erupt from the group of light beings as his light form rises up to meet them.
“Atta boy!”
“Welcome home!”
“Mom! Dad!” the man cries. He throws his arms around them, but not very successfully. He tries again, and this time his arms pass through them a little less rapidly. Third time’s a charm: becoming accustomed to his arms of light, he slowly wraps them around his parents. After a few moments relishing the reconnection, he turns to the next being in the receiving line. “You! You sank my business! You took my entire life away from me! You turned me into a drunk! No—oh my God!” he hoots. “That was you?” After a couple of pats on the back that pass right through his former nemesis, the third pat meets its target. “That was you all along? Holy moly, you sure had me going!”
The shouts of welcome and greeting slowly start to fade up and away. The dog barks more raucously.
“Hey Buddy—how ya doin’ ole pal? It’s been such a long, long time!”
Angela and David smile at each other.
“Quite a homecoming,” David says.
“Oh, yes. They all get something like that.”
“What’s next for him? What’s next for his angels?”
“Whatever they want, whatever they choose.” Angela takes David’s arm and they disappear…
~~~~~~~~~~~~~
AUTHOR Bio and Links: 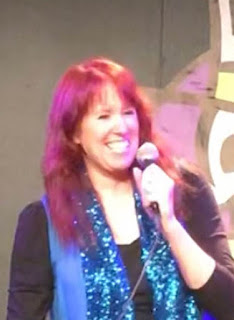 Ann Crawford has lived by one shining sea, then the other, then the prairie, and now the mountain – just to combine a couple of our great patriotic songs here. She grew up in New York, about an hour north of the city, and then went to college at Boston University. She then lived in Northern California for 23 years until love at first sight called her to move to Kansas. She and her family moved to Colorado about 10 years ago and her writing nest has a view of a grove of trees in a beautiful garden, with the Rocky Mountains in the near distance.
Some of Ann’s social media bios say that she’s a world-traveling, high-flying, deep-diving, life-loving author. Those are all literally true: She’s visited all 50 states and 70+ countries and territories and counting. She can fly a plane (and she even aced the FAA exam!) and loves to scuba dive. Another hobby is playing the piano, including taking lessons.
Jobs? Oh, Ann’s had more than a few. She’s worked in advertising and marketing, talent management, and the financial industry. She’s also an award-winning filmmaker. For her first movie she went to Viet Nam with a group of veterans and filmed them doing humanitarian work and returning to their areas of operation. This movie won a very prestigious award. For her second movie she traveled the world talking to people from all walks of life about how we can make world peace. But her great love is writing books.
While Ann has won several book awards and is a #1 Amazon bestselling author, her genre is a little complicated; her novels could fall under women’s literature, chick lit, romantic comedy, inspirational/metaphysical/visionary, and fantasy/science fiction—and for a couple of her books it’s all of these at the same time! The main thrust of her books is taking an odd, complicated situation (a starbeing ending up in Kansas, anyone?) and providing myriad insights with usually even more laughs.
Her first book, Visioning, and her only non-fiction so far, was published in 2001 and it’s been updated twice since then. Over the years have come Mary’s Message (about Mary Magdalene), Angels on Overtime (an inspirational romcom), Spellweaver (about a healer during the witch hunts), Life in the Hollywood Lane (about an actor’s journey through grief after her BFF’s suicide, but also a quirky romcom), and Fresh off the Starship (an inspirational romcom). Coming soon is The Life of My Love (non-fiction about finding the love of your life) and Bazoomerangs, which is about 3 generations of women – an ageing hippie flower child, a middle-aged Trump-supporting bank executive, and a trans woman college student – that’ll also be chockablock with laughs and insights to this wild and wonderful life thing we have going on here.
Ann’s Links: linktr.ee/anncrawford
Links:
Ann’s website: anncrawford.net
Angels on Overtime on Amazon:
https://www.amazon.com/Angels-Overtime-Divine-Romantic-Comedy-ebook/dp/B07FF9MWY8
~~~~~~~~~~~~~
GIVEAWAY:
Ann Crawford will be awarding a $25 Amazon/BN GC to a randomly drawn winner via rafflecopter during the tour.
a Rafflecopter giveaway


Ann Crawford has written a fun and entertaining book in her Angels on Overtime. I enjoyed this story. It was delight to read. I found myself laughing out loud at some of the scenes. I loved the author’s humor. This was a well written, beautiful and quick tale.

I am giving Angels on Overtime four and a half stars. I would love to read more by this author in the future. This one is most definitely not one to be missed.