This cover reveal is organized by Goddess Fish Promotions. Kristina M. Sanchez will award a randomly drawn winner a $20 Amazon/BN GC. Click on the tour banner to see the other stops on the tour. 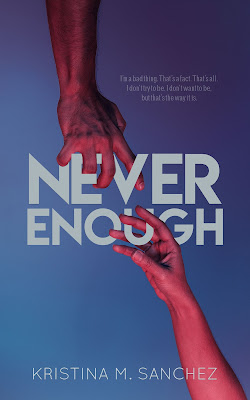 At thirty-seven, Valentin Belmonte returned to his mother’s house with his tail between his legs. No surprise there. His life had been a long line of bad choices, failures, and trouble. Also returning home, freshly graduated and on the hunt for a job, was Mina Toussaint, the orphan Val’s mother and stepfather had taken in when he was already grown. She’d been the only person who’d ever really liked him, but he’d screwed that up a long time ago.

Mina’s adoptive family had treated her like the perfect princess and little girl they always wanted. Val was the only one who’d ever seen her for who she really was; she’d never wanted to be a princess. But after what happened when she was sixteen, she thought she hated him. Now, six years later, things were different. She wasn’t the child she’d been when she got so angry. The trouble was that Val hadn’t changed. He still saw her.