NBTM Virtual Book Tour and Giveaway: For This Knight Only by Barbara Bettis

For This Knight Only
by Barbara Bettis 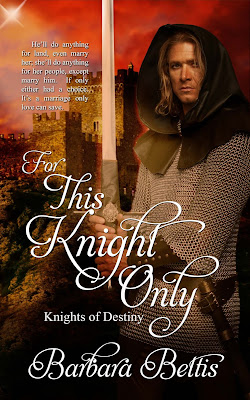 ~~~~~~~~~~~~~
GENRE: Historical Romance
~~~~~~~~~~~~~
BLURB:
He’ll do anything for land, even marry her; she’ll do anything for her people, except marry him.  If only either had a choice.  It’s a marriage only love can save.
Sir Roark will do anything to gain land, even beguile an unwilling lady into marriage. He knows she’s much better off with a man to take control of her besieged castle, to say nothing of her desirable person. But it isn’t long before he discovers that, although her eyes sparkle like sunlight on sea waves, her stubbornness alone could have defeated Saladin.
Lady Alyss is determined to hold her family’s castle, protect her people, and preserve her freedom— until her brother’s dying wish binds her to a stranger. Still, she’ll allow no rugged, over-confident, appealing knight to usurp her authority, even if she must wed him. Especially since he thinks a lady’s duties begin and end with directing servants. Alyss has a few surprises for her new all-too-tempting lord.
But when a common enemy threatens everything, Roark and Alyss face a startling revelation. Without love, neither land nor freedom matters.
~~~~~~~~~~~~~
EXCERPT
“Pardon?” Alyss’s voice came in a whisper, but he seemed to hear well enough.
“I said your brother wished us to wed.”
The sound of a million crickets chirruped in her ears. His lips continued to move, but she heard nothing. Of a sudden, her bottom hit stone as she collapsed onto a step, but her eyes saw only him.
He loomed over her, hands propped on hips, dark hair brushing those broad shoulders. She raised her brows in a level gaze—and inhaled sharply. Hazel eyes, sprinkled with green and gold
chips, gleamed back. With effort, she recalled his recent words and her thoughts focused.
She shot to her feet. “You must be mad. I have no intention of wedding a stranger who appears at my gate with some imaginary story of my brother’s last commands. I remind you, sir, you are a guest. In fact, I must ask you to leave. Your behavior is intolerable.”
His big hands closed around her shoulders. They were warm. Firm but gentle. She shook them off. He leaned in.
“I’m afraid I can’t do that, my lady,” he murmured.
~~~~~~~~~~~~~
AUTHOR Bio and Links:
BUY LINKS:  AMAZON: https://amzn.to/2Xlzynj
Bio:
Award-winning author Barbara Bettis has always loved history and English. As a college freshman, she considered becoming an archeologist until she realized there likely would be bugs and snakes involved. And math. Through careers as a newspaper reporter and editor, then a college journalism and English professor, she’s retained her fascination with history. Give her a research book and a pot of tea, and she’s happy for hours. But what really makes her smile is working on a new story. Now retired, she lives in Missouri where she edits for others and spins her own tales of heroines to die for—and heroes to live for.
Find Barbara Here:
Bookbub: https://www.bookbub.com/authors/barbara-bettis
Goodreads: https://www.goodreads.com/barbarabettis                                                                           Facebook: .http://www.facebook.com/BarbaraBettisAuthor
Twitter: http://www.twitter.com/BarbaraBettisAuthor
Website / Blog / Newletter: http://barbarabettis.com
~~~~~~~~~~~~~
GIVEAWAY:
Barbara Bettis will be awarding $25 Amazon/BN to a randomly drawn winner via rafflecopter during the tour.

I have had the pleasure to have read and enjoyed books by Barbara Bettis and For This Knight Only is no different. Medieval times is starting to be my favorite time period to read and I adored Roark and Alyss’s story. It was great watching them grow throughout the book. It was full of adventure, action, and romance.

I am giving For This Knight Only four and a half stars. I recommend it for readers who enjoy Medieval era romance.