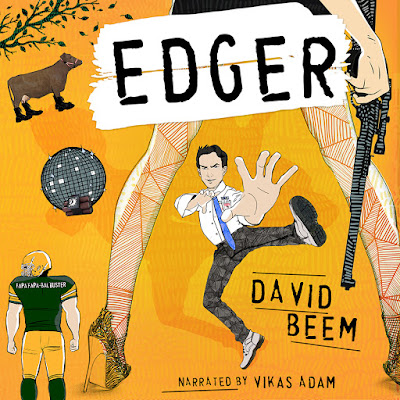 ~~~~~~~~~~~~~
GENRE: Comedy, Action/Adventure
~~~~~~~~~~~~~
BLURB:
Meet Edger (Ed-jer), a twenty-six-year-old gadget retail dork destined to become the world’s first superhero! His superpower: the ability to channel the Collective Unconscious, a psychic network connecting the living and the dead. In his arsenal are the skills of Bruce Lee, the strength of Samson, the wisdom of the ages...and the dancing chops of Michael Jackson—including that one twisty foot move, crotch grab, and fedora tilt. But there's a catch... Like every psychic super power to get administered through a hypodermic needle, this one comes with a prick. Someone seems to have misplaced the booster necessary for stabilizing his superpower. Without it, Edger has three days before his brain turns to pudding. Join our Dork of Destiny as he overcomes the world’s greatest butt, two rival Cluck-n-Pray gangs, an evil cow, a Green Bay Defensive Tackle, rifle-toting assassins—and a pair of stoners who inadvertently create the world’s first supervillain after a wild night on Twitter!
~~~~~~~~~~~~~
EXCERPT:
Water and glass shower the dance floor. Needle scratches vinyl. Hattori Hanzo seizes control of my body and I land with the grace of a ninja. Mary, who has no dead ninja in her head, thuds with the grace of a turkey carcass dropped from the Level Two parapet of Westfield Horton Plaza.
“Kill them!” someone yells.
“Don’t kill them!” I yell back, figuring that’s got to be worth a try.
Panic ensues. Screaming people run and duck for cover. Shots are fired. A bullet ricochets off a larger-than-life phosphorescent wallpaper image of Caleb’s crotch. I seize control of my body from Hanzo, grab Mary, and drag her behind a nearby couch.
More gunfire.
I chance a peek. Real life Caleb Montana is near the front door, exchanging shots with two Nostradamus agents behind a life-sized statue of Caleb in his quarterback uniform, one arm cocked back preparing to pass the football, and the other stretched out in front, pointing.
I round on Mary, who flings her wet hair back like a Sports Illustrated swimsuit model. Water sprays my visor.
“Cut me loose.”
“Right, right,” I say, feeling around on my utility belt. Jeez, I’ve never tried to locate anything without someone helping me from the Collective Unconscious. There are a lot of things here. I pull a tiny ball out—it grows into a switchblade-shaped object. Seems promising. I flick it on. Blue flame blows out from the end.
“Holy crap!”
“Come on, quit fooling round.”
“Don’t rush me! Do you have any idea how stressful this is?”
“Come on,” she says, her voice husky.
“There’s like, fifty thousand things on this belt, and they all look the same.”
“Just calm down.”
“You never see Batman having this problem is all I’m saying.”
~~~~~~~~~~~~~
AUTHOR Bio and Links:
David Beem loves superhero movies, taekwondo, and flossing. He lives in Djibouti with his family and crippling self-doubt. To help actualize David’s inner confidence, visit his website and buy all the stuff: www.davidbeem.com
Amazon author page: https://www.amazon.com/David-Beem/e/B005M4NEYI/
~~~~~~~~~~~~~
GIVEAWAY:

David Beem will be awarding a $10 Amazon or BN GC to one randomly drawn commenter via Rafflecopter.

David Beem’s Edger is not at all what I had expected. And that is not a bad thing. This book cracked me up from start to finish. It was wacky and quirky that had me in stitches. I had the pleasure of listening to the audio version with the narration by Vikas Adams, which was a fabulous performance.


Edger is getting five plus stars from me. I am definitely looking forward to reading the other Edger books to find out what he gets into next.

I received the audio version of this book from the publisher. This review is 100% my own honest opinion.