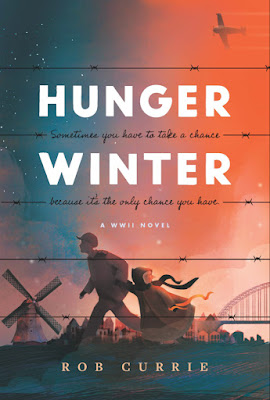 It's the Netherlands in late 1944. Thirteen-year-old Dirk's Papa left to fight with the Resistance. Then Mama died. When the Gestapo snatched his older sister and he learned they were coming for him next, Dirk left home in the middle of the night. He had his pockets stuffed with food, his little sister asleep in his arms, and his heart heavy with a dark secret.

Dirk Ingelse’s eyes flew open, and he raised his head off the pillow. Who could be knocking on the front door? Gestapo? His insides turned to ice.

The pounding resumed, the sound carrying easily up the stairs into Dirk’s bedroom. It didn’t sound like the rap of knuckles—it was more like the thumping of an angry fist. Or the butt of a rifle.

It had to be the Gestapo. They had been doing more raids lately, and they often came at night. Who else would pummel the front door of the Ingelse’s farmhouse in the middle of the night and risk getting arrested?

Dirk rolled out of bed and crept to his bedroom window. Easing the curtain open a bit, he kept his face away from the window, like Papa had taught him. He couldn’t see a vehicle. But what if they hid their car?  Dirk’s right hand shook.

He couldn’t hide. They would tear the place apart to find him. And he couldn’t run—they would have the place surrounded. He’d heard stories. His right hand shook harder. It had been doing that a lot ever since—

The assault on the door resumed, even louder this time. “Open up!” growled a deep voice.

Dirk turned from the window and crept down the stairs.

Life conspired to get Rob Currie to write Hunger Winter: A World War II Novel. His father is a World War II veteran and his wife is Dutch. An award-winning author, it was only a matter of time before he would focus his writing on World War II. Research for Hunger Winter included numerous books, interviews with Dutch WWII survivors, and three weeks in the Netherlands. His investigation revealed astonishing details about the Dutch experience of the war, which begged to be turned into a book.

Born and raised in the suburbs of Detroit, he graduated from Cornerstone University and went on to earn a master's degree and doctorate in psychology from St. Louis University. He has taught psychology at Judson University since 1987. His hobbies include playing basketball, cooking, and writing poetry.

Rob Currie will be awarding a $10 Amazon/BN GC to a randomly drawn winner via rafflecopter during the tour.

I thought Rob Currie’s Hunger Winter: A World War II Novel to be a good read. I liked the historical setting with emphasis of faith and inspiration that tells some valuable lessons. I loved the bravery and courage of the characters of Anna and Dirk.

I am giving Hunger Winter: A World War II Novel four and a half stars. I would recommend it for younger readers. Especially, those who enjoy stories that are historical.