Blog Tour and Giveaway: Ghosted at the Altar by Chautona Havig 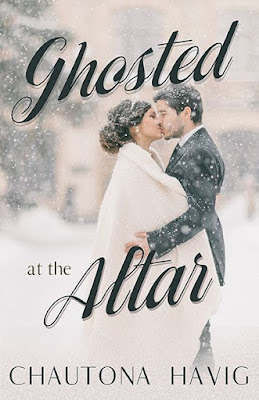 Book: Ghosted at the Altar

He’s goin’ to the chapel and he’s gonna get… ghosted?

Guys don’t always “get into” the whole wedding thing, but there’s one thing Mitchell Bogaert has been anticipating for the last two years–that first glimpse of Brenna coming to meet him at the altar. So, when the back doors open to reveal a missing bride, he’s shocked, disappointed, hurt, angry–pick your negative emotion. It probably fits.

Brenna Kinsey didn’t know she’d bolt at the last minute, but now she’s trying to figure out what happened and how to prevent it happening again before Mitchell decides she’s not worth the emotional trauma–or the town drama!

Lauren Kinsey, on the other hand, is more than just the kid-sister bridesmaid. She’s a self-proclaimed sleuth and determined to ferret out the problem, arrive at a solution, and get things back on track before broken hearts shatter into more pieces than Humpty Dumpty.

Time’s running out, only the bride and groom don’t realize it. How will Lauren fix this mess before the “clock strikes midnight” and there isn’t a ghost of a chance to save the marriage that never got a chance to be? 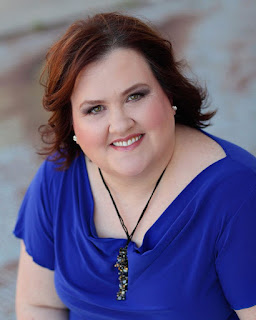 Chautona Havig lives in an oxymoron, escapes into imaginary worlds that look startlingly similar to ours and writes the stories that emerge. An irrepressible optimist, Chautona sees everything through a kaleidoscope of It’s a Wonderful Life sprinkled with fairy tales. Find her at chautona.com and say howdy—if you can remember how to spell her name

How Did One Silly Story Become a Favorite Series?

That first book… still isn’t in print. I’ve reimagined it, and it will be coming out soon. However, Dickens… well, that guy has a way of getting under your skin, and what better place for a Dickens Ghost Storytelling Contest than in a village that looks ripped from England’s countryside?

The Ghosts of New Cheltenham was born. I actually thought it would be a great way for me to force myself to finish that book I’d started so long ago. But then Amanda Tru sent me a message that said, “We’re going to do one about wedding dresses,” and Something Borrowed, Someone Blue became the second book instead. I wanted more of Mitchell, Brenna, and the loveable Lauren, so I concocted a story that would give me just that.

Is it any wonder, then, when Amanda messaged again with our next collection theme of jilted brides or grooms, I immediately thought, “Oh, dear! What if Mitchell got ghosted at the altar?” That is the fastest title I’ve ever come up with!

Because one more Christmas story in New Cheltenham wasn’t quite enough, I set a third one there this year! The Bells of New Cheltenham. In that one, Mitchell is done with this ghost storytelling stuff and starts a contest of his own!

While you can read these books as stand alones (both mine and the ones within the collections), mine will be a richer reading experience if they are read in the following order

Something Borrowed, Someone Blue (in The Wedding Dress Yes CrossRoads Collection)

Ghosted at the Altar (in the Five Gold Rings CrossRoads Collection)

The Bells of New Cheltenham. (in the Melodies of Christmas Love Collection)

(note, the last two really can be read in any order.)

How did my silly idea for a plasmaphobic guy who had to tell a ghost story to inherit spark one of my favorite series? All things considered, how could he not?

For Him and My Family, December 10

Because I said so — and other adventures in Parenting, December 15

She Lives To Read, December 19 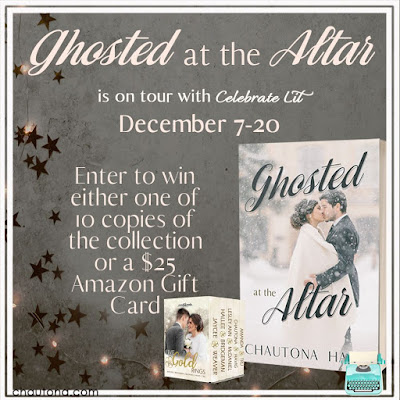 To celebrate her tour, Chautona is giving away  the grand prize of a $25 Amazon gift card!!

Ghosted at the Altar is the third installment from Chautona Havig’s New Cheltenham Shopkeepers series. Even though it is part of a series, I believe this one can be read as a stand alone. This one is probably my favorite of the series to date. It had some fun light hearted humor that made me giggle at times. I loved the characters of Brenna, Mitchell, and Lauren. I had no problem reading this quick story read in one sitting. So very good.

Ghosted at the Altar is getting a very well deserved five plus stars. I highly recommend it for readers who love sweet romance and those sweet during the magical time of Christmas. I have no doubt they will fall in love with this story like I did.

I received Ghosted at the Altar from the publisher. This review is one hundred percent my own honest opinion.