Blog Tour and Giveaway: Snuffed Out by Barbara Cornthwaite 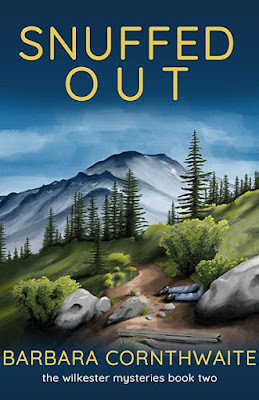 Picnics can be murder… scenes.

What was supposed to be a romantic picnic at “their spot” turns criminal when Katrina and Todd stumble—almost literally—over a body.

What’s the college chef doing under a bush up in the mountains? Other than being dead, that is.

Who killed him? Why?

All clues point to people who Katrina is certain didn’t do it. Especially the one who ends up dead himself.

Thanks to a slow-burning romantic relationship that can’t seem to get past chapter one, and a determination to save her friend from false arrest, Katrina joins Todd again as they riddle out bizarre clues, weed through unlikely suspects, and learn to communicate on a more personal level.

What do you get when you combine literary humor, sweet romance, and a practical helping of faith? A cozy mystery that’ll keep you guessing. Barbara Cornthwaite’s second Wilkester Mystery has everything you want for a cozy read. 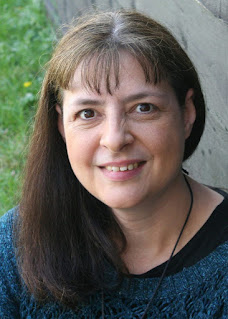 Teaser for Snuffed Out

Todd closed the folder with the Franklin case paperwork in it and laid it on top of the stack of folders waiting to be filed. He almost reached for the Delaney case notes again but resisted the impulse. There was no new information in there, and he’d gone over everything a dozen times in the last few days. He had promised Katrina he wouldn’t give up, but without any new leads to pursue, there wasn’t much he could do.

He shook his head, impatient with himself. He’d been doing so well at putting her out of his mind—hadn’t thought of her all day until this moment. Now he’d probably be struggling for the rest of the day.

“Hey, we just got a call from the librarian at Wilkester College about the theft of a manuscript. The chief said either one of us could go, but I thought you might like to take it.”

“It’s no use. Nothing’s going to happen between Dr. Peters and me.”

John leaned up against the door frame and grinned at him. “’Dr. Peters,’ huh? She was ‘Katrina’ for weeks.”

“Well, that was before. Now that I know a relationship isn’t possible, I need to keep my distance.”

“She turned you down?”

“I didn’t ask, but trust me, I know what I’m talking about.”

“Hmm,” John said. “You don’t usually give up on things so easily. Well, do you mind handling this anyway? I’ve got that other robbery case to deal with, and I’m supposed to be interviewing that guy from Tacoma in a couple hours.” Todd hesitated and John added, “She’s an adjunct professor, right? She’s probably not even on campus now, and she certainly won’t be in the library.”

“Oh, okay.” Todd sighed. He pushed back his chair and stood up.

“’Attaboy. Thanks for taking the call.” John turned to go and then looked back. “It will get easier, you know.”

For the Love of Literature, November 30

For Him and My Family, December 5

Because I said so — and other adventures in Parenting, December 7

Labor Not in Vain, December 7

She Lives to Read, December 9 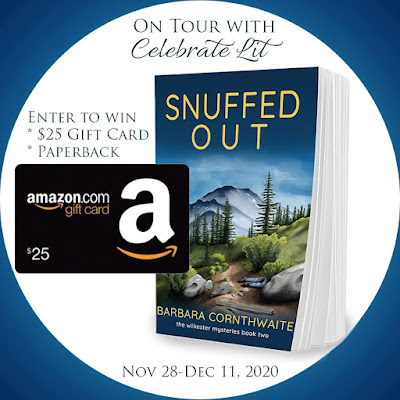 Snuffed Out is the second installment from Barbara Cornthwaite’s series, Wilkester Mysteries. I had the pleasure of reading the first book, Brought to Book, and was excited to have the opportunity to read this one. I was not disappointed. Since it is part of a series, I would think it would be best to start at the beginning. I enjoyed reading this quick mystery and suspense. I thought it was fun and entertaining to catch up with Todd and Katrina to see where they are now. I was captivated with their story from start to finish. It was so good.

I am giving Snuffed Out four and a half stars. I am hoping there will be a third addition to the Wilkester Mysteries. I recommend this one for readers who enjoy reading clean mysteries.

I received Snuffed Out from the publisher. This review is one hundred percent my own honest opinion.